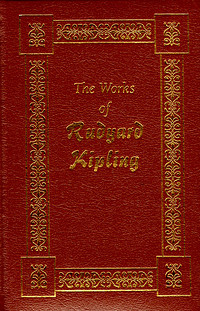 The Works of Rudyard Kipling

Purchase of this book includes free trial access to www.million-books.com where you can read more than a million books for free. This is an OCR edition with typos. Excerpt from book: THE STORY OF URIAH Now there were two men in one city; the one rich, and the other poor. Jack Barrett went to Quetta Because they told him to. He left his wife at Simla On three-fourths his monthly screw. Jack Barrett died at Quetta Ere the next month's pay he drew. Jack Barrett went to Quetta, He didn't understand The reason of his transfer From the pleasant mountain-land: The season was September, And it killed him out of hand. Jack Barrett went to Quetta And there gave up the ghost: Attempting two men's duty In that very healthy post; And Mrs. Barrett mourned for him Five lively months at most. Jack Barrett's bones at Quetta Enjoy profound repose; But I shouldn't be astonished If now his spirit knows The reason of his transfer From the Himalayan snows. And, when the Last Great Bugle Call Adown the Hurnai throbs, When the last grim joke is entered In the big black Book of Jobs, And Quetta graveyards give again Their victims to the air, I shouldn't like to be the man, Who sent Jack Barrett there. THE POST THAT FITTED Though tangled and twisted the course of true love, This ditty explains No tangle's so tangled it cannot improve If the Lover has brains. Ere the steamer bore him Eastward, Sleary was engaged to marry An attractive girl at Tunbridge, whom he called my little Carrie. Sleary's pay was very modest; Sleary was the other way. Who can cook a two-plate dinner on eight paltry dibs a day? Long he pondered o'er the question in his scantly furnished quarters ? Then proposed to Minnie Boffkin, eldest of Judge Boffkin's daughters. Certainly an impecunious Subaltern was not a catch, But the Boffkins knew that Minnie mightn't make another match. So they recogn...… (more)

LibraryThing member stilton
I'm sure it's very petty of me and that I'm missing the point as usual, but I can hardly ever get past the rum-titty-tum rhythms of Kipling's verse. That combined with the tiresome cockneyisms makes everything sounds like a music hall song. And while I like a good old knees up as much as anyone, I don't particularly want to sit down and read the lyrics to "Boiled Beef and Carrots".… (more)

Just So Stories by Rudyard Kipling