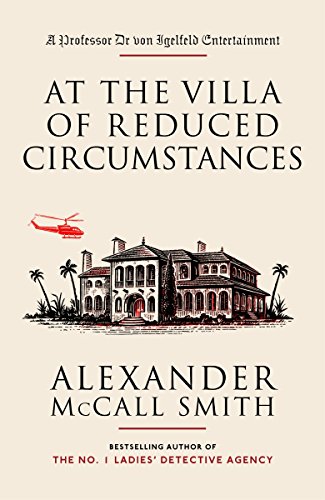 At the Villa of Reduced Circumstances

Von Igelfeld is quite pleased with his role as a visiting scholar at Cambridge, even if his English colleagues can be difficult to comprehend. They frequently speak in metaphors and make peculiar assumptions, saying such odd things as "I take it your journey went well," when that is not the case at all. But von Igelfeld settles in the best he can, and is soon deeply embroiled in some shady political scheming at the university. After returning to the comfort of his perfectly rational Germany, von Igelfeld is invited to Colombia for a special fellowship. But while there, he gets caught up in some decidedly unscupulous behavior.

LibraryThing member cbl_tn
At the Villa of Reduced Circumstances is the third and, at least for the time being, the last of three novellas featuring Professor Dr Moritz-Maria von Igelfeld, author of Portuguese Irregular Verbs, and his colleagues at the Institute of Romance Philology in Regensburg, Germany. I use the term "novella" loosely, for this is primarily a collection of humorous sketches exaggerating the rivalries and ambitions of von Igelfeld and his academic colleagues, who are experts in extremely narrow fields of interest. (In other words, they are big fish in a very small pond!)

In this book, Professor Dr von Igelfeld spends most of his time outside of Germany, first at a Cambridge college as a Visiting Professor, then in Bogotá, Colombia, as the recipient of an honor from the Colombian Academy of Letters. I had just finished a serious book set in Cambridge, so a light-hearted story in the same setting was a welcome change of pace. By the end of the Colombian story, I felt like I was reading a Monty Python sketch -- perhaps McCall Smith is a fan? This was the perfect read for a busier than usual week -- diverting, not too demanding intellectually, and a pleasant way to unwind at the end of a couple of very long days.… (more)
9 more
LibraryThing member goose114
This third installment of Professor Dr. Von Igelfeld books is similar to the others. The story is outlandish and the characters are eccentric. Heading to Colombia to be inducted into a prestigious group Professor Dr. Von Igelfeld is entangled in a revolution that ends with a surprising outcome. This was a light and humorous read. I truly enjoyed the series and this book was a nice end to the series.… (more)
LibraryThing member lkernagh
As much as von Ingelfeld struck me as an unlikable character in the earlier installments in the series, I have to admit that he does have some likeable traits (like importance be places on being true to the family motto Truth Always which leads to interesting awkward moments for von Ingelfeld as he struggles to not lie while at the same time steer a visiting professor from learning of the whereabouts of the washroom facilities located across the hall from von Ingelfeld's Cambridge quarters. The fact that most if not all of von Ingelfeld's attempts for preferential self glory tend to backfire on him makes the stories in this installment entertaining. If the story has a moral message it is that "The grass is not always greener on the other side." I found the episode in Colombia to be rather far-fetched but still entertaining and I did enjoy von Ingelfeld's bafflement at the oddities of his Cambridge colleagues. Nothing better than having a von Ingelfeld appear rather "normal" compared to the behaviour of the Cambridge master!

Overall, this is a series that has grown on me and I am really glad that I did not let the tepid experience of Portuguese Irregular Verbs deter me from continuing with the series.… (more)
LibraryThing member nbmars
This book starts out as an amusing, frothy satire on the jealousy-fraught relationships of academia. Professor Moritz-Maria von Igelfeld is on a constant quest for status vis-à-vis his colleagues at the University of Regensburg. His primary nemesis, Prof. Unterholzer, surreptitiously arranges for von Igelfeld to get a sabbatical at Cambridge so Unterholzer can occupy von Igelfeld’s nicer office. During the Cambridge portion of book, the novel is droll and even occasionally hilarious.

Shortly after von Igelfeld’s return to Germany, he is next invited to Bogota, Columbia. It is here the author unfortunately jumps the shark, ruining what had been a perfectly delightful commentary on academia and on the English culture versus that of the Germans. A string of absurd and improbable events in South America goes beyond satire, and in my opinion, devolves into silliness.

Since the book clearly has two sections that could in truth be divided quite easily, I would say read it for the sojourn to Cambridge, and skip the misadventures in South America.

(JAF)… (more)
LibraryThing member sturlington
This is a throwaway book, an extremely short comic novel that is never more funny than it is absurd. Or perhaps I don’t appreciate the vagaries of academic life enough to get the joke, although I found the section depicting the rapid rise and fall of Central American governments to be so full of stereotypes as to be nearly offensive.… (more)
LibraryThing member themulhern
Preposterous, but somewhat enjoyable.
LibraryThing member BooksForDinner
The third Dr Igelfeld book. Always fun, quick, refreshing reading.
LibraryThing member mstrust
When Professor Dr. Moritz-Maria von Ingelfeld of the Institute of Romance Philology in Germany is goaded by his work colleague and nemesis, he pursues a four month residency at Cambridge. Arriving at the prestigious university, von Ingelfeld is almost immediately filled with regret. The school Master bursts into tears within minutes of their meeting, the other professors plot against each other, and von Ingelfeld must share a bathroom.
Upon his return home, von Ingelfeld finds proof that his nemesis has been using his office during his absence, which annoys him tremendously. The bigger news is that someone has actually requested his masterwork, a rare occurrence, which leads von Ingelfeld on a mysterious trip to Bogota.
A slim book, and perhaps I should have read the previous Portuguese Irregular Verbs first, but that didn't stop this from being a giggle. The professor tries to be dignified, but he enjoys his very prim academic humor and is being eaten away by his professional feud.… (more)
LibraryThing member sweetiegherkin
Professor Dr. von Igelfeld is invited to give academic talks in the U.K. and in Colombia, and finds that he cannot quite get used to non-German customs.

So I haven't been super in love with this series so far, but have been appreciating that they're pretty light and almost mindless, which is a nice distraction from everything else going on in the world right now as well as a change of pace from the generally more dark/serious works I tend to read.

This is the first one in the series that I picked up as an audiobook rather than printed text, and that was very much a mistake in this case. The audiobook narrator's voice was rather stentorious, which I guess was considered a good fit for the academic background of the main character. However, he was also rather monotone and did not do anything to present this as the humorous book it is meant to be. It came across as really rather dull instead.

In this book, we see far less of von Igelfeld's close professor friends as he is too busy travelling for most of it. We do get to see more of the institute's librarian than in previous books, but frankly the character isn't terribly interesting. The parts in Colombia in particular really start to go too far into the absurd in my humble opinion.

I will move on to the next title in this series only because it is the last one and I've come this far, so I want to finish the series. Still, I'm really not that big of a fan of it and much prefer some of McCall Smith's other works more.… (more)
LibraryThing member rightantler
Fun conclusion to an excellent series.
Fewer