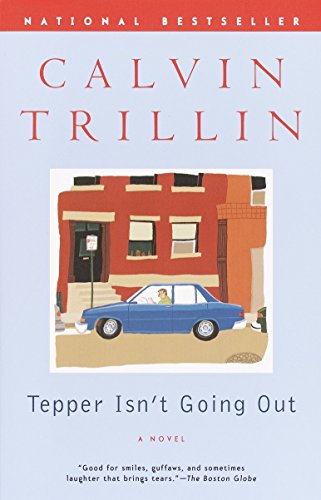 Tepper Isn't Going Out: A Novel

Murray Tepper would say that he is an ordinary New Yorker who is simply trying to read the newspaper in peace. But he reads while sitting behind the wheel of his parked car, and his car always seems to be in a particularly desirable parking spot. Not surprisingly, he is regularly interrupted by drivers who want to know if he is going out. Tepper isn’t going out. Why not? His explanations tend to be rather literal: the indisputable fact, for instance, that he has twenty minutes left on the meter. Tepper’s behavior sometimes irritates the people who want his spot. (“Is that where you live? Is that car rent-controlled?”) It also irritates the mayor—Frank Ducavelli, known in tabloid headlines as Il Duce—who sees Murray Tepper as a harbinger of what His Honor always calls “the forces of disorder.” But once New Yorkers become aware of Tepper, some of them begin to suspect that he knows something they don’t know. And an ever-increasing number of them are willing to line up for the opportunity to sit in his car with him and find out. Tepper Isn’t Going Out is a wise and witty story of an ordinary man who, perhaps innocently, changes the world around him.… (more)

LibraryThing member JamesPaul977
I am eagerly awaiting Trillin's next fiction book! This has interesting characters and a plausible story line based on the quirks of city living. It's short but very worthwhile.
13 more
LibraryThing member TadAD
It's hard to imagine that someone can make an entire novel out of a guy refusing to move his car from a legal parking spot in New York City, but Trillin manages quite well. It's funny and relevant and has a nice little twist at the end.
LibraryThing member Katya0133
A funny story of a man curiously obsessed with finding the perfect parking space.
LibraryThing member mthelibrarian
Considered the first parking novel. Amusing. Recommended for NYC fans.
LibraryThing member stevenschmitt
Anne Rice has written great novels about immortal vampires. Tom Clancy tells tales of supper powers embroiled in global struggles shaping the political structure of the modern world. In this book, Calvin Trillin writes about a guy in his car. Please don’t misinterpret this as implying any kind of road trip anything; the car doesn’t actually move. This is Trillin’s great ‘guy sitting in a parked car novel’ and is a great satirical look at life in the big city.… (more)
LibraryThing member Brianna_H
Trillin at his finest. Tepper Isn't Going Out is one of the few books that can make me laugh out loud hysterically. Believe it or not, this entire novel focuses on Tepper's quest to find the perfect parking spot in parking challenged New York City. Trillin has somewhat of an obsession with parking and even started a magazine about parking in New York. His obsession translates into hilarity.… (more)
LibraryThing member MusicMom41
This is the best satire I’ve read in years. At times I laughed so hard I could hardly breathe. It is a tremendous “send up” of our society and how the news media portrays it. The “hero”, Murray Tepper, is very likable and you really root for him. All he wants to do is park legally and use the quiet time for reading his newspaper. Trillon is brilliant in how he shows how this develops into a item of national interest and ends up in the courts. As this silliness is going on you have the realization that this could really happen in our whacky society! The ending is quite satisfying, too.… (more)
LibraryThing member sturlington
This is a little novel that actually ends up saying quite a lot – about the city of New York, about the modern idea of celebrity, about the seemingly random connections that give order to a chaotic universe. But mostly it’s about parking.

The main character, Tepper, is a hobbyist parker. He finds a legal spot and squats there, because he actually isn’t going out. This strange habit eventually makes it into the newspapers, turning Tepper into a kind of modern-day guru on the mountaintop. New Yorkers make the journey to his current parking spot to ask his advice on any subject.

Eventually, Tepper’s parking habit entangles him with the mayor of New York, who is obsessed with keeping order (and who is not-so-subtly modeled on pre-9/11 Rudy Giuliani), and so the story gets rolling, culminating in street riots, demonstrations, trials – but all conducted in a very quiet, orderly manner. It’s a subtly humorous book that will make anyone want to go parking, but not go out.… (more)
LibraryThing member copyedit52
Very funny book, though I wonder whether those who aren't born and/or bred New Yorkers would get its full impact. Its protagonist likes to read the newspaper in his car, in various parts of Manhattan, and his Herculean knowledge of alternative side of the street, days of the week when permitted, no parking at all vs. limited parking, etc., regulations. Includes a thinly fictionalized authoritarian mayor known as Il Duce, who is of course the grotesque Rudolph Giuliani.… (more)
LibraryThing member sullijo
"Tepper Isn't Going Out" is a delightfully irreverent take on authority, moral courage, and the joy of finding the perfect parking space. The book oscillates between sly social commentary and outright satire as the titular Murray Tepper stands up in defense of his right to sit in a (legally parked) car. Populated by memorable characters this book will delight anyone who enjoys seeing mad bureaucracies brought down a few notches.… (more)
LibraryThing member Bookish59
Is Tepper a brilliant planner who wants to retire or just a simple New Yorker with a parking fetish? You'll have to read this rollicking hysterical book about people with poor listening skills, insanely paranoid politicians, New York City, and parking to find out.

Good read but you may have to be a New Yorker to appreciate all the nuances.… (more)
LibraryThing member Iambookish
So boring. Wished it had been a short story.
LibraryThing member LynnB
Murray Tepper has a parking spot in a garage. But, every night, he goes searching for an on-street spot where he can park his car. There, he sits and reads the paper, waving away other parking spot seekers who ask if he is going out. Because he isn't.

Why is he doing this? Nostaligia for the days when he couldn't afford a garage and finding a legal, long-term spot was both a necessity and a triumph? Mid-life crisis? Or some deeper plot? All Murray will say is that he is legally parked and not going out.

This is a funny book -- a bit of a satire on city politics, fame and folk heroes. A real pleasure to read -- you'll like Murry Tepper and, like so many characters in the novel, want to sit in the car with him and listen to what he doesn't really say.… (more)
LibraryThing member MarianAllen
A quick read. By the time I got on Goodreads to add it to my Currently Reading shelf, I had read it.

Since it's by Calvin Trillin, those familiar with Calvin Trillin probably already know this is filled with quirky, gentle comedy, and that it's almost a disappointment when it turns out to have a plot.

Trillin transported me to residential Manhattan and the detailed know-how necessary to park legally and well. It's as if somebody said, "Calvin, parking is the most boring subject on earth. I dare you to write a book about it that people will enjoy reading."

He won the bet. This book makes me want to go sit in my car and read the paper, but it won't be any fun unless I can get my husband to install a parking meter in the front yard.… (more)
Fewer

Too Soon to Tell by Calvin Trillin
Paris to the Moon by Adam Gopnik
The Puttermesser Papers by Cynthia Ozick
Bachelor Brothers' Bed & Breakfast by Bill Richardson
Long Ago In France: The Years In Dijon (Destinations) by M.F.K. Fisher
1 more
Another Life: A Memoir of Other People by Michael Korda
Fewer