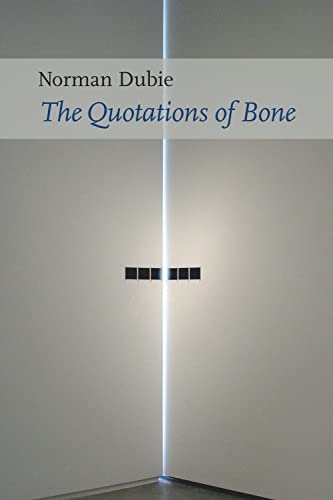 The Quotations of Bone

Winner of the 2016 Griffin International Poetry Prize "Norman Dubie is one of our premier poets."--The New York Times "Dubie's poems are unmatched in their incandescent imaginings, gorgeous language, and fearless tracking of the inexorably turning wheel of existence."--Booklist "Dubie [is] one of the most powerful and influential American poets."--The Washington Post "The poems in Dubie's newest collection [The Quotations of Bone] are deeply oneiric, governed by vigorous leaping energy that brings the intimate into contact with history, and blurs the distinction between what is real because it once happened, and what is real because of the emphatic manner in which it has been felt. Longtime admirers of Dubie will certainly recognize the familiar mind and spirit able to punch through the surface of experience and into deep psychic quandary with a single revelatory gesture (Did you ever want to give someone // All your money?)-but that tendency is greatly amplified here. One feels the unconscious mind working ceaselessly, even playfully, alongside memory, imparting the poems as if with a strange and consoling living spirit. This makes for a heightened sense of mystery and mortality in poems of private experience. And when such an impulse is aligned with public history--the division of Germany, say, or the acceleration of the planet's ecological crisis--it is outright haunting. Dubie's uncontested mastery of the lyric poem has, in this collection, broken into strange and revelatory territory."--Griffin International Poetry Prize Judges' Citation In his twenty-ninth collection of poems, Norman Dubie returns to a rich, color-soaked vision of the world. Strangeness becomes a parable for compassion, each poem leading the reader to an uncommon way of understanding human capacities. In the futuristic sphere ofThe Quotation of Bone, the mind wanders meditatively into an imaginative and uncontainable history. The Quotations of Bone The meal of bone was a soured milk-- just the heads of giant elk in a dark circle looking down on a wooden bowl of soda crackers and pork. One large knife resting in the meat of a woodsman's calloused hand. He grins at his woman who is slowly poisoning him with the stringy resins of morning glory. A tasteless turpentine with pink pig. The speeches of bone are matrimonial in early autumn-- by January there's a froth of blood at a nostril. He thinks a long icicle is buried in his ear. She thinks D. H. Lawrence was a grim buccaneer. I hate most men. Adore the few named Lou. One small addendum: the dead elk are grinning too. Norman Dubie is a Regents professor at Arizona State University. He lives in Tempe, Arizona.… (more)

Storm Toward Morning by Malachi Black
Sex & Love & by Bob Hicok
Alamo Theory by Josh Bell
Shock by Shock by Dean Young
Green Migraine by Michael Dickman
8 more
Slant Six by Erin Belieu
Faithful and Virtuous Night: Poems by Louise Glück
A Small Story about the Sky by Alberto Ríos
Time Will Clean the Carcass Bones: Selected and New Poems by Lucia Perillo
So Much Synth by Brenda Shaughnessy
The New Testament by Jericho Brown
Eventually One Dreams the Real Thing by Marianne Boruch
The Poem She Didn't Write and Other Poems by Olena Kalytiak Davis
Fewer