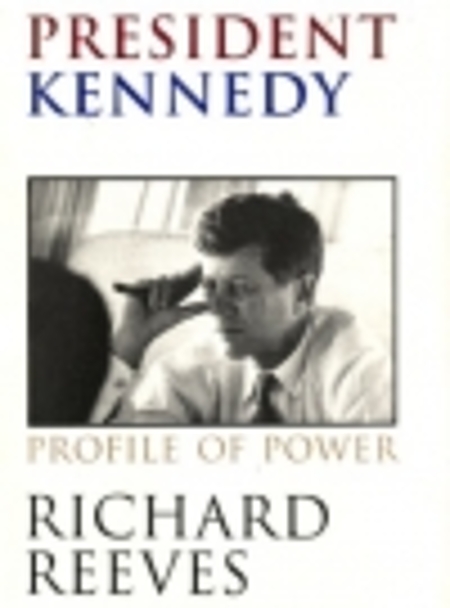 "Three decades after his death, here is the startling story of John F. Kennedy's three years in the White House. Based on previously unavailable White House files, letters and records, and hundreds of new interviews, Richard Reeves has written the first objective account of Kennedy's presidency. President Kennedy is a dramatic day-by-day, often minute-by-minute, Oval Office narrative of what it was, and is, like to be President. This is the view from the center of power during the years when the United States faced nuclear confrontation with the Soviet Union and something close to racial war at home. This is brilliant, relevant history, vividly told." "Kennedy lived along a line where charm became power. He proved that the only qualification for the most powerful job in the world was wanting it. He would not wait his turn, sure that he could always prevail one-on-one - until, in pain and heavily medicated, he was humiliated in Vienna in 1961 at a summit with Nikita Khrushchev. He came home in despair, thinking he would be the last U.S. President, asking for the number of expected American deaths in the war that seemed inevitable - 70 million, he was told." "He began a massive military build-up and a secret search for peace. On the day in 1963 when that peace seemed possible, he gave the greatest speech of his life on ending the Cold War - on the same day that four black girls were blown to bits at a church in Birmingham and a Buddhist monk burned himself to death in Saigon to protest a government created by the United States. Within weeks, Kennedy and Khrushchev agreed on a nuclear test ban treaty, hundreds of thousands of blacks led by Martin Luther King, Jr., marched on Washington, and Kennedy ordered the overthrow of the U.S.-backed government in South Vietnam - beginning a cycle of assassinations that ended with his own death and those of King and his brother Robert Kennedy." "These were the days when the world held its breath. The Bay of Pigs. The Freedom Rides. The Vienna Summit. The building of the Berlin Wall. Kennedy's confrontation with U.S. Steel. The deadly riots and demonstrations as blacks tried to enroll in the state universities of Mississippi and Alabama. The Cuban missile crisis. The tax cut. The sending of U.S. troops into Vietnam. His relations with Eisenhower, Premier Khrushchev, Charles de Gaulle, Harold Macmillan, Fidel Castro, Ngo Dinh Diem, Martin Luther King, Jr., J. Edgar Hoover, Marilyn Monroe and a hundred other women, and his own men, particularly Robert Kennedy and Robert McNamara." "John Kennedy lived life as a race against boredom and death, thinking he would die young, needing large doses of drugs with side effects that included depression, paranoia, and compulsive sexual desire. Kennedy brought out the best in the American people and recast the U.S. economy, presiding over the century's greatest prosperity." "On the morning after the new President's first night in the White House, his old friend journalist Charles Bartlett asked him if he had slept in Abraham Lincoln's bed and Kennedy answered that he had: "I jumped in and just hung on!" He was still hanging on three years later."--BOOK JACKET.Title Summary field provided by Blackwell North America, Inc. All Rights Reserved… (more)

LibraryThing member JosephKing6602
The narrative provided a significant addition to what one already knows or believed about John Kennedy. Insightful surrounding his use of power and influence.