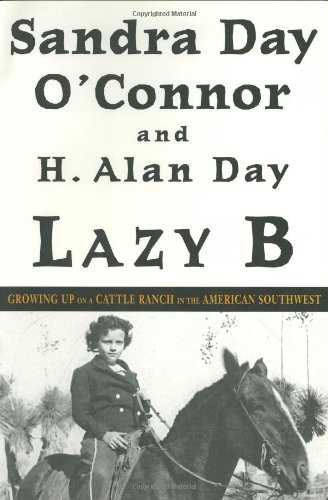 Lazy B: Growing Up on a Cattle Ranch in the American Southwest

What was it in Sandra Day O'Connor's background and early life that helped make her the woman she is today-the first female justice of the U.S. Supreme Court, and one of the most powerful women in America? In this beautiful, illuminating, and unusual book, Sandra Day O'Connor, with her brother, Alan, tells the story of the Day family and of growing up on the harsh yet beautiful land of the Lazy B Ranch in Arizona. Laced throughout these stories about three generations of the Day family, and everyday life on the Lazy B, are the lessons Sandra and Alan learned about the world, about people, self-reliance, and survival, and the reader will learn how the values of the Lazy B shaped them and their lives. Sandra's grandfather first put some cattle on open grazing land in 1886, and the Lazy B developed and continued to prosper as Sandra's parents, who eloped and then lived on the Lazy B all their lives, carved out a frugal and happy life for themselves and their three children on the rugged frontier. As you read about the daily adventures, the cattle drives and roundups, the cowboys and horses, the continual praying for rain and fixing of windmills, the values instilled by a self-reliant way of life, you see how Sandra Day O'Connor grew up. This fascinating glimpse of life in the American Southwest in the last century recounts an interesting time in our history, and gives us an enduring portrait of an independent young woman on the brink of becoming one of the most prominent figures in America today.… (more)

LibraryThing member ilovemycat1
Heard Sandra Day O'Conner discuss this biographical book of her childhood at the Lazy B Ranch (Arizona/New Mexico border) at a forum sponsored by the Commonwealth Club of California. I became very intrigued by the subject matter and wanted to know more. It is an easy read, about a way of life that was foreign to me, but highly interesting. She does a commendable job of making the barren, dry plains of the south west come alive. Her family's ranchland was vast - if comparing, it was equivalent to 1/5 of all the land of Rhode Island. Her descriptions of the tasks, the responsibility of always ensuring that the cattle have water and grass to survive, and her dad's self reliance in fixing and building everything himself are truly remarkable. What stood out is how incredibly hard everyone worked, and under such harsh and sparse conditions. The climate, the isolation, the lack of amenities in and outside the home, make it seem like a way of life that is truly gone. Yet, her love for the land, the animals, her family, the ranch and the employees make for a very enjoyable read. The fact that she became the first woman on the United States Supreme Court makes her childhood and way of life all the more remarkable.… (more)
1 more
LibraryThing member TimBazzett
LAZY B, by Sandra Day O'Connor and H. Alan Day.

An informative account of the early life and family of Supreme Court Justice O'Connor, LAZY B gives a fairly detailed account of what a family ranch was all about from the 1930s (Day-O'Connor was born in 1930)up into the 1980s, when both her parents died. Not long after that, the Day family ranch was sold.

While O'Connor's story was interesting enough, its telling remained rather flat and humorless and never really engaged me, and I found myself skimming over many of the short anecdotal sections which make up the book. Sandra was the oldest of three children and there was a nine-year gap between her and her two siblings, Ann and Alan. She was sent away to school in El Paso and so spent less time on the ranch than did her siblings, especially her brother, who took over the day to day operations of the ranch as her father became older. I suspect many of the memories laid down here came not from Sandra but from her brother Alan, who is credited as co-author, even though the book is presented in first person. So, while the book is well-written enough, it has a ghost-written feel to it, which made it less engagaging. I would recommend it mostly for its historical importance, i.e. this is how one of our Supreme Court Justices grew up, and this is what ranch life in the desert Southwest was lke from the Depression years through the end of the twentieth century.… (more)
Fewer

Personal History by Katharine Graham
The Farm She Was: A Novel by Ann Mohin
My Beloved World by Sonia Sotomayor