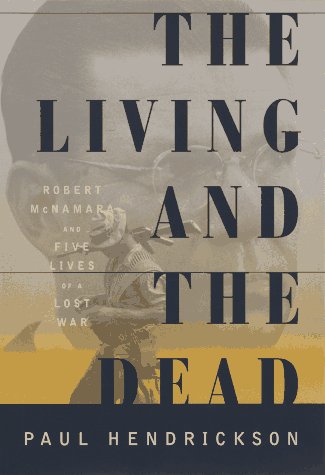 The Living and the Dead: Robert McNamara and Five Lives of a Lost War

This brilliant, explosive, and passionate book reveals the Vietnam War as we never before have seen it - through the prism of Robert McNamara's crucial and tangled decision-making. It is a book that examines not only the genesis - in McNamara's life and character - of his wartime decisions, but how they altered forever the fates of four men and a woman who, beyond their own human importance, might be said to stand in for all who were caught in the maelstrom that was Vietnam.In McNamara's looming shadow we are shown, in equally intense detail, five people who were caught up in the wake of his life-and-death decisions: an artist whose long-harbored rage erupts on a Massachusetts ferry as he tries to kill McNamara, by then retired from the Cabinet; a young Marine physically and psychologically scarred by Vietnam battle; a Quaker who immolated himself in protest outside the Pentagon; a nurse desperate to believe her agonies in Vietnam were for a good cause; and a member of a Saigon family enlisted, and then tragically abandoned, by the Americans. More than a decade in the making, The Living and the Dead is meticulously researched, astonishing in its revelations, and often in conflict with McNamara's own version of events.… (more)

The Best and the Brightest by David Halberstam
Stilwell and the American experience in China, 1911-45 by Barbara W. Tuchman
In Pharaoh's Army by Tobias Wolff