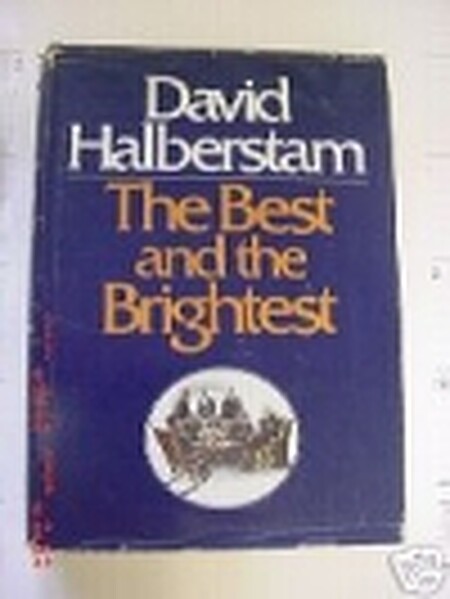 The Best and the Brightest

David Halberstam's masterpiece, the defining history of the making of the Vietnam tragedy, with a new Foreword by Senator John McCain. "A rich, entertaining, and profound reading experience."--The New York Times Using portraits of America' s flawed policy makers and accounts of the forces that drove them, The Best and the Brightest reckons magnificently with the most important abiding question of our country's recent history: Why did America become mired in Vietnam, and why did we lose? As the definitive single-volume answer to that question, this enthralling book has never been superseded. It is an American classic. Praise for The Best and the Brightest "The most comprehensive saga of how America became involved in Vietnam. . . . It is also the Iliad of the American empire and the Odyssey of this nation's search for its idealistic soul. The Best and the Brightest is almost like watching an Alfred Hitchcock thriller."--The Boston Globe "Deeply moving . . . We cannot help but feel the compelling power of this narrative. . . . Dramatic and tragic, a chain of events overwhelming in their force, a distant war embodying illusions and myths, terror and violence, confusions and courage, blindness, pride, and arrogance."--Los Angeles Times "A fascinating tale of folly and self-deception . . . [An] absorbing, detailed, and devastatingly caustic tale of Washington in the days of the Caesars."--The Washington Post Book World "Seductively readable . . . It is a staggeringly ambitious undertaking that is fully matched by Halberstam's performance. . . . This is in all ways an admirable and necessary book."--Newsweek "A story every American should read."--St. Louis Post-Dispatch… (more)

LibraryThing member EdKupfer
"Contemporary history," Halberstam calls it. A surprisingly easy read -- I knocked it out in three days flat. Everyone knows what this one is about: how a group of policy makers in successive US governments lost their collective minds over a small Asian nation. I could not go more than three pages without thinking, "Can you believe we're going through the exact same shit again?" The similarities between the JFK/LBJ approach to Vietnam and Bush's adventures in Afganistan and Iraq are arresting. And depressing. It seems we really are doomed to repeat the mistakes of our ancestors.… (more)
11 more
LibraryThing member cwhouston
This is an amazingly good political history of the machinations of the JFK and LBJ administrations and their involvement in Vietnam. Full of detail about the policy makers, military top brass, bureaucrats etc and contains a large amount of analysis of the decision making process and its influences and outcomes.

The book is rather lengthy and yet does not cover the events following Nixon's election in 1968, which is a shame.
Despite this, however, the 'Best and the Brightest' is one of my favourite books and I have since bought other titles by the author and found them excellent, if not up to quite the same standard.

Belongs on the shelf next to 'Bright Shining Lie', 'Fire in the Lake', and Karnow's 'Vietnam: a History'. First class.… (more)
LibraryThing member ecw0647
Read this years ago when it first appeared. As a result, I read everything Halberstam wrote. Whenever I hear anyone discuss hiring only the "best and the brightest" now, I shudder.
LibraryThing member bontley
A difficult read based on the author's assumption of the readership's prior in-depth knowledge. Still, it was enlightening and horrifying and stunning.
LibraryThing member marcfitch
It can get mind-numbing at points with heavy exposition into lives that never seems to move forward, but overall this is one of the most prophetic and telling books about where America, both politically and culturally, went wrong. It should be required reading for anyone going into politics, but since most of them can't even read it would be pointless to give them a list.… (more)
LibraryThing member DinadansFriend
A journalist tries to write history. It is not a bad job, and definitely has a competent chronology and lively writing style. It is more precisely, a history of the Kennedy/Johnson Years with special emphasis on the descent into Vietnam. This is the first mention that it could be seen as Kennedy's War, not LBJ's.
LibraryThing member SeriousGrace
Halberstam's The Best and the Brightest is a deep dive into the origins of the Vietnam War. It is a scrutiny of the policies and procedures crafted during the Kennedy administration that led to the consequences in Vietnam. The meat of the book takes place between the years of 1960 and 1965 but flows back and forth to earlier and later times to give substance to the timeline. What really helps the narrative is that Halberstam was a reporter during this time. He was at the heart of the perfect storm: the fall of China, the rise of McCarthy and the outbreak of the Korean War. This trifecta of events had a profound and lasting effect on the White House and domestic politics of the time.… (more)
LibraryThing member JBD1
An absolute must-read for anyone interested in the dynamics of government decision-making.
LibraryThing member tmph
Re-reading; having read it shortly after it came out. Brilliant.
LibraryThing member Pharmacdon
I was interested in how United States involvement in Viet Nam started, partly due to the fact as I was in college everyone was wondering if they would in up in Viet Nam rather that graduating college. Secondly, after reading The Sympathizer
by Viet Thanh Nguyen and other books, I wanted to learn more about the involvement started and why it was a failure. Unfortunately, it is another tale of how the government lied to the public and refused to listen to people in Viet Nam how poorly the war was going and that the government in South Viet Nam was weak as was the army. The title is ironic because JFK and LBJ had gathered the best and brightest, but had failed to see through the failures of the policy and ignoring the truth. The following is a quote from another review the explains the book better than I can: Halberstam gives us the inside story of how America entrapped itself in the Viet Nam War. He shows how the legacy of McCarthyism and 1940’s politics over China left a decimated State Department and influenced JFK’s and LBJ’s thinking. He details the many times JFK and others who doubted the war altered their positions out of fear of being seen as soft. He shows how the arrogance and overconfidence of Kennedy’s team and subsequently Johnson’s led the US into war. He takes us through the constant escalation ending with the Tet offensive of 1968 and the fall of the façade of competence, the public’s realization that its government, as well as the war, was lost and out of control. Along the way we learn the backgrounds, motivations and impact of key figures: Robert McNamara, Dean Rusk, John Paton Davies, McGeorge Bundy, William Bundy, Walt Rostow, Dean Acheson, George Ball, Averill Harriman, Clark Clifford, Roger Hilsman, John McNaughton, Maxwell Taylor, Paul Harkins, William Westmoreland, Robert Kennedy and of course JFK and LBJ.… (more)
LibraryThing member drsabs
This well written book covers the US decision-making on the Vietnam War from the 1940s through Nixon’s election. The focus is on the Kennedy team, which was then inherited by Johnson. It tells of the shift from the original, sound policy in the 1940s and 50s of avoiding a colonial land war in Asia to new policy objectives, lacking a basis in Vietnamese reality, focused on stopping the spread of communism and avoiding a repeat of the “who lost China” debate. In the process key policymakers over and over again ignored warnings from those who had a better grasp of the realities in Vietnam. Capsule biographies are provided on all of the key players at the moment in the narrative when they assume a prominent role. A natural break comes with Kennedy’s replacement by Johnson and the lost hope that Kennedy’s skepticism about Vietnam would have led him to disengage after the 1964 election. Despite having been written at the end of the 1960s, the analysis is fresh and I am sure holds up very well against more recent scholarship. The literary qualities of the work give it an atmosphere of a Greek tragedy for the personalities involved, many of whom despite their talents get ground up by the escalations of the war. The capsule biographies take on an almost stream of consciousness quality as Halberstam evokes the personalities of his characters in this terrible chapter in East Asian history.… (more)
LibraryThing member ShadowBarbara
long historical account of the Vietnam War and how we got into it and handled it. Excellent profiles of the men and times
Fewer

The Fifties by David Halberstam
The Coldest Winter: America and the Korean War by David Halberstam
Stilwell and the American experience in China, 1911-45 by Barbara W. Tuchman
The Living and the Dead: Robert McNamara and Five Lives of a Lost War by Paul Hendrickson
The final days by Bob Woodward
2 more
Truman by David McCullough
All The Presidents Men (The Most Devastating Detective Story of this Century) by Carl Bernstein and Bob Woodward
Fewer