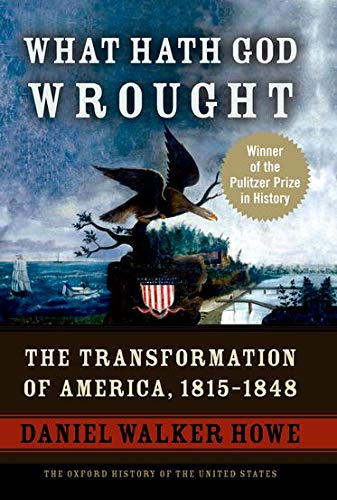 The Oxford History of the United States is by far the most respected multi-volume history of our nation. In this Pulitzer prize-winning, critically acclaimed addition to the series, historian Daniel Walker Howe illuminates the period from the battle of New Orleans to the end of theMexican-American War, an era when the United States expanded to the Pacific and won control over the richest part of the North American continent.Howe's panoramic narrative portrays revolutionary improvements in transportation and communications that accelerated the extension of the American empire. Railroads, canals, newspapers, and the telegraph dramatically lowered travel times and spurred the spread of information. These innovationsprompted the emergence of mass political parties and stimulated America's economic development from an overwhelmingly rural country to a diversified economy in which commerce and industry took their place alongside agriculture. In his story, the author weaves together political and military eventswith social, economic, and cultural history. He examines the rise of Andrew Jackson and his Democratic party, but contends that John Quincy Adams and other Whigs--advocates of public education and economic integration, defenders of the rights of Indians, women, and African-Americans--were the trueprophets of America's future. He reveals the power of religion to shape many aspects of American life during this period, including slavery and antislavery, women's rights and other reform movements, politics, education, and literature. Howe's story of American expansion culminates in the bitterlycontroversial but brilliantly executed war waged against Mexico to gain California and Texas for the United States.Winner of the New-York Historical Society American History Book PrizeFinalist, 2007 National Book Critics Circle Award for Nonfiction… (more)

The Washington Post
[An] exemplary addition to the Oxford History of the United States.
— 1 more
The New Yorker
One of the chief merits of “What Hath God Wrought” is Howe’s earnest effort, and great success, at chronicling changes of all sorts, from rates of childhood mortality to the gross national product, from the frequency of bathing to the firepower of cannons.

LibraryThing member Narboink
A comprehensive examination of one of the most extraordinary periods of American history, "What Hath God Wrought" gives an account of the technological, intellectual, cultural, political, military and religious developments between 1815 and 1848. The volume of data is enormous, and Daniel Walker Howe does a brilliant job of synthesizing it into a master class on the era.

As suggested by the title of this work, the period from 1815 until 1848 was indeed a time of transformation, from the agrarian, East Coast dominated economy of the Revolutionary era, to the geographically expanding and urbanized economy created in large part by the Industrial Revolution. That having been said, I can’t say that I was mesmerized by this book and found it somewhat of a grind to get through. I don’t know if it was the subject matter or the writing style, but the story seemed disjointed and never flowed smoothly. Much of the writing is in the style of a textbook, and as a result failed to capture my attention.

It seemed that fully half the book focused on the Presidency and policies of Andrew Jackson, and suffice it to say, the author is no fan of Jackson. While there is much to condemn in Jackson’s character and administration, it is no exaggeration to suggest that if the creators of Mount Rushmore had room for one more bust, Jackson’s would almost certainly have been the one chosen. And though the author correctly points out valid criticisms of Jackson, he at times tries a little bit too hard, such as strenuously and repeatedly painting Jackson with the brush of “white supremacist”. Not to suggest that Jackson was not a white supremacist, only that virtually 100% of the white American population of the time (including abolitionists) were rabid white supremacists.

Also, the author seems to be exceptionally fond of Henry Clay, suggesting that had he been elected in 1844, the Civil War might have been avoided. The author relies upon Clay’s willingness to enact a program of compensated emancipation, as if the South were interested in such a plan. Had he attempted such a program, it is more likely that the War would have accelerated rather than avoided. And while one may argue over the morality of the Mexican War, it is hard to argue with results (acquisition of Alta California, New Mexico and much of what is now Texas), and Clay was on record as being adamantly opposed to the aforesaid territorial expansion, even after the war had been concluded.

In summary, the book is a laudable effort to fill in a period of American history often glossed over. It is well researched and comprehensively presented. It is not however an engrossing read and suffers somewhat from an overly negative bias as relating to the period of Jacksonian administration, and a consequently overly positive viewpoint toward those on the opposite end of the political spectrum.… (more)
LibraryThing member bjmitch
Unlike most books about the period 1815 through 1848 in American history, this is not a hagiography of President Andrew Jackson. It's a more balanced view of what was happening in the entire nation during that time, along with how the political scene in Great Britain and Mexico affected American history.

I've read so much about Jackson, much of it unqualified admiration of his presidency, that it was a relief to read who else was prominent and what they were up to. It does include Jackson's fight against the national bank, the results of his feuds with political enemies (of which there were many), and of course the Eaton affair. It is on the brink of being biased against Jackson as well, I must admit.

I learned more about the Mexican War and the acquisition of Texas, New Mexico and California than I have ever known. And I felt this was a good background book for reading about the Civil War. I recommend this book and believe Howe wrote it in an easy style for a non-academic to read. However, I would caution that it is an 855 page book. This isn't a fast read but slower, careful reading is rewarding.… (more)
LibraryThing member auntieknickers
It took a long time to listen to this audiobook, but it was well worthwhile. I learned a great deal about a period of American history that was skimped in the history courses I've taken, and yet one which was deeply important in the development of the United States. Howe brings in a lot of cultural information as well as the tales of Presidents and generals. The major thing I took away from this book was a distaste for Andrew Jackson. In some ways he seems more like a Tea Partyer than someone who is still memorialized by Democrats holding Jefferson-Jackson Day dinners. This is part of the Oxford History of the United States; I'm now going back to the story of the Revolution in The Glorious Cause.… (more)
LibraryThing member jjwilson61
Another solid entry in the Oxford History of the United States series. I didn't know a lot about the antebellum period and this 900 page tome was very enlightening and never dull. From politics to technology and social and religious movements there was a lot going on in this 33 year period which had a momentous effect on later events. I learned how Martin Van Buren invented the political party and how really horrid a human being Andrew Jackson was (and how he reminds me in a lot of ways of Trump).… (more)
LibraryThing member kiparsky
A massive but not over-stuffed guide to a short but extremely active period in American history, and one often overlooked. This period saw the transition from the nation founded along the Atlantic to the one which spanned the continent, from a basically agricultural economy to a burgeoning industrial power. This period also saw the development of religious and social movements which are still active today, and also laid the groundwork for much of the current US political system. Howe's approach is, as he says in his conclusion, to tell a story, not to argue a thesis. He does not present an overarching Theory Of American History into which all of the events detailed can be shoehorned. Instead, he presents threads which seem to be related (a covert theory of history, but an unavoidable and uncontroversial one) and follows them in an order which is roughly chronological, but only very roughly. One of the advantages of Howe's approach to the material for the amateur historian (like myself) is that he is not afraid to revisit events, to plow over the ground from several angles. This allows the reader unfamiliar with the period (such as myself) to develop a more firm understanding of the overall picture than would be obtained by a more linear path. Quite worth the reading.… (more)
LibraryThing member Doondeck
A thorough and insightful review of period of American history that is usually overlooked.
LibraryThing member phyllis01
A terrific overall look at America during this time. If you think Andrew Jackson was the greatest president evah, though, this may not be the book for you, unless you are willing to see him in his entirety.
Fewer