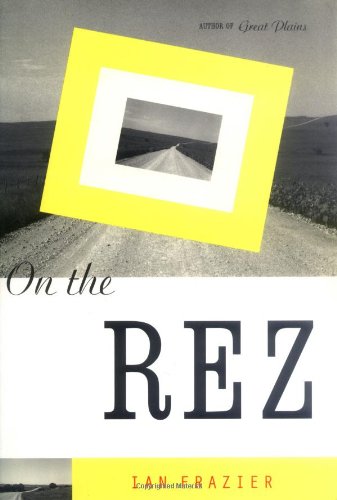 A great writer's journey of exploration in an American place that is both strange and deeply familiar. In Ian Frazier's bestselling Great Plains, he described meeting a man in New York City named Le War Lance, "an Oglala Sioux Indian from Oglala, South Dakota." In On the Rez, Frazier returns to the plains and focuses on a place at their center-the Pine Ridge Reservation in the prairie and badlands of South Dakota, home of the Oglala Sioux. Frazier drives around "the rez" with Le War Lance and other Oglalas as they tell stories, visit relatives, go to powwows and rodeos and package stores, and try to find parts to fix one or another of their on-the-verge-of-working cars. On the Rez considers Indian ideas of freedom and community and equality that are basic to how we view ourselves. Most of all, he examines the Indian idea of heroism-its suffering and its pulse-quickening, public-spirited glory. On the Rez portrays the survival, through toughness and humor, of a great people whose culture has shaped our American identity.… (more)

Frazier's style is not for everyone, but I enjoyed it. Not as much as "Great Plains," but a good book none the less.… (more)
LibraryThing member dele2451
This book is actually a story within a story. The first stories centers around the unusual bond between an alcohol abusing Native American and a self-proclaimed Indian wannabe; the second chronicles the impact one special teenager can have on an entire community many consider bleak and often evil. Both stories are interesting in their own right, but their juxtaposition inside this book makes it a more compelling read than it may have been otherwise. Mr Frazier's offers some thought-provoking and seldom-addressed perspectives on the everyday life of Indians in modern America interspersed with brief passages on the historical events, various treaties, and tribal leaders that have played major roles in shaping their fate. Even people who are not particularly interested in Native American culture or history should find the inspirational tale of basketball hero SuAnne Big Crow worth the read. I recommend.… (more)
LibraryThing member yellerreads
On the Rez details the author's experiences on the Pine Ridge reservation.
Fewer

In the Spirit of Crazy Horse by Peter Matthiessen
Where White Men Fear to Tread: The Autobiography of Russell Means by Russell Means
Bad Land: An American Romance by Jonathan Raban
Bury My Heart at Wounded Knee: An Indian History of the American West by Dee Brown Published by Holt, Rinehart & Winston (1970) Hardcover
Reservation Blues by Sherman Alexie
1 more
Lasso the Wind : Away to the New West by Timothy Egan
Fewer