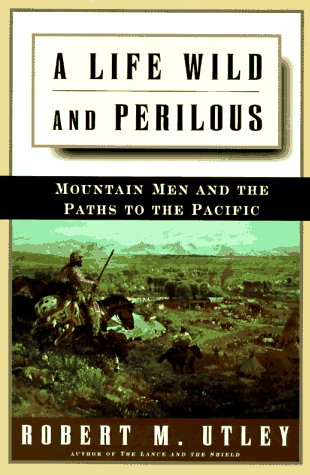 A Life Wild and Perilous: Mountain Men and the Paths to the Pacific

Early in the nineteenth century, the mountain men emerged as a small but distinctive group whose knowledge and experience of the trans-Mississippi West exted the national consciousness to continental dimensions. Though Lewis and Clark blazed a narrow corridor of geographical reality, the West remained largely terra incognita until trappers and traders - Jim Bridger, Kit Carson, Tom Fitzpatrick, Jedediah Smith - opened paths through the snow-choked mountain wilderness. They opened the way westto Fremont and played a major role in the pivotal years of 1845-1848 when Texas was annexed, the Oregon question was decided, and the Mexican War ed with the Southwest and California in American hands, the Pacific Ocean becoming our western boundary.

LibraryThing member nbmars
Portraits of the Mountain Men from the 1820s through the Gold Rush. These were, per Utley, "colorful and eccentric men" and "bold adventurers" who headed West as the U.S. expanded in the role of trappers, traders, explorers, and discovers. The Mexican War (1846) barely came before discovery of gold in California. Very tough to find an overland route to the Pacific that would allow wagons. Standouts among the mini-bios: Kit Carson was a top explorer of California, New Mexico, Colorado, Utah. John C. Fremont, a mere lieutenant, had much to do with using military force in California before it was taken from Mexico. The books includes maps and photos. (JAB)… (more)
3 more
LibraryThing member jpsnow
Utley provides a history of the life and times of the men who first explored the American west during the early days of western expansion. Some motivated by the urge of discovery and most by the profitable beaver trade, a hodge-podge of men fought land barriers, natives, and each other as pre-cursors to the military and pioneer settlers. Jedediah Smith constructed the first comprehensive maps and died at a young age of 32, the total number of explorers numbered in the hundreds and their paths crossed frequently, many of the tales are tall but they all speak of dangerous feats and men toughened by nature and struggle. They didn't emphasize in my midwestern education that by 1776 the California coast was already settled by Catholic Spanish and the Mexican government.… (more)
LibraryThing member RandyStafford
In the years between 1804 and 1847, Americans explored the Louisiana Purchase, the Rocky Mountains, took California from Mexico, and colonized Oregon. And the explorers and trappers called mountain men were instrumental in all those events.

Utley starts his account with George Drouillard and the legendary John Colter, both members of the Lewis and Clark expedition, and concludes his main story with Kit Carson's actions in the Mexican-American War. However, this book is not a collection of biographies. Utley does provide sketches for some mountain man, the events they are most famous for, and, sometimes, details of their deaths. He does not provide any real details about their gear or trapping and fighting methods. Utley concerns himself with a broader theme: how the travels of mountain men filled in the maps of the west, expunged certain geographical fantasies from the public mind, and drew people west.

Some of the mountain men here are famous. Besides Colter, we meet Jim Bridger, trapper, Army scout, guide, and establisher of the famous trading post named after him. We also, briefly, meet Hugh Glass who once swore to kill Bridger after he and another trapper left Glass for dead after Glass was mauled by a grizzly. Kit Carson's adventures with John Fremont are discussed.

But Utley also covers less well-known, but important, mountain men. The greatest explorer of all, Jedediah Smith, trapped beaver mainly as a means to subsidize his extensive wanderings. Atypically literate for a mountain man, he kept extensive journals and maps -- most of which vanished after his death. Utley considers another trapper, Joe Walker, the most accomplished of all in the mountain man craft and, as an explorer, second only to Smith. Others had less august reputations. Edward Rose, a trapper who lived for many years with the Crow, was frequently sought as an interpreter but never really trusted. Too often negotiations he was involved with broke down, and he was suspected of mischief for private ends. Old Bill Williams was known as an eccentric mountain man. Jessie Fremont, John's wife, even accused him of cannibalism.

In their quest for beaver pelts, before changing fashion, overtrapping, and substitution of nutria made trapping untenable, the mountain men not only added to geographical knowledge but served as agents, intentionally and unintentionally, for American expansion to the Pacific. They traveled to Spanish California and helped bring it into the Union by their settlements there and their actions in the Mexican-American War. But California was not the only Pacific territory whose national ownership was disputed. American mountain men, and this book is concerned with American citizens or those mountaineers who served American interests, competed with the English Hudson Bay Company in the Columbia River basin. Their knowledge inspired and guided missionaries and, later, settlers into what became the Oregon Territory. British interests there were supplanted, and some mountain men, like Joe Meek and Doc Newell, became important political figures in Oregon's early history.

Besides the broad story of mountaineers as the vanguard of American expansion west, there are other things of interest here. Taos, New Mexico and its importance to fur trading is covered. Utley talks about the little known 1823 punitive expedition against the Arikara. Writer Washington Irving shows up as an important source for this period of history.

Though it is not a main point of the book, Utley does talk some about relations between the mountain men and Indians. The attitudes ranged from racism to toleration to admiration. Some tribes, like the Blackfeet, were constant foes of the mountain men. Others, like the Shoshone and the Nez Perce (at least during the time of this history), were almost always friendly.

Utley uses his last chapter to wrap up the loose ends of some of his subjects' lives and the ultimate nature of their contributions to American development. Cartographer Peter Dana has the final say with an interesting chapter on how the book's extensive topographical maps, detailing the travels of various mountain men and the fur trade in general, were prepared from satellite photos.

Utley organizes the book along geographical lines and accounts of how particular routes of travel were developed. This leads to some confusion since he jumps back and forth in time. However, Utley's clear style and a well-done index help keep things straight. The footnotes are not only extensive but full of useful information.… (more)
LibraryThing member rakerman
In some ways this is a kind of sequel to the Lewis and Clark Expedition.
Fewer