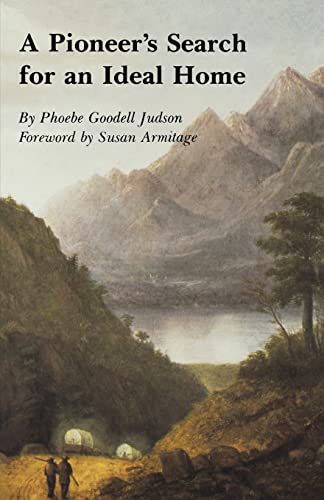 A Pioneer's Search for an Ideal Home

Phoebe Judson was a young bride in 1853 when she and her husband crossed the plains from Ohio to the Puget Sound area of Washington Territory. She was ninety-five when this book was first published in 1925. The years between were spent in "a pioneer's search for an ideal home" and in living there, when it was finally found at the head of the Nooksack River, almost on the Canadian border.   Phoebe Judson's account of the journey west is based on daily diary entries detailing her fear, excitement, and exhaustion. At the end of the trail, the Judsons encountered hardships aplenty, causing them to abandon a farm and business in Olympia before their arrival in the Nooksack Valley. During the Indian Wars they holed up in a fort at Claquato. In time, Phoebe overcame her fear of the Indians, learned the Chinook language, and won their friendship. All this is told in vivid detail by a woman of great dignity and charm whom readers will long remember. In a foreword, Susan Armitage, professor of history at Washington State University, calls A Pioneer's Search for an Ideal Home a "classic pioneering account," important for its woman's point of view.… (more)

The Northwest Coast: Or, Three Years' Residence in Washington Territory by James Gilchrist Swan
Puget's Sound: A Narrative of Early Tacoma and the Southern Sound by Murray Morgan
Island Year by Hazel Heckman
Four Wagons West by Roberta Frye Watt
Letters of a Woman Homesteader by Elinore Pruitt Stewart
11 more
Skid Road. An Informal Portrait of Seattle. by Murray Morgan
Pioneer reminiscences of Puget Sound by Ezra Meeker
Winter Brothers: A Season at the Edge of America by Ivan Doig
Conversations With Pioneer Women (Oregon country library) by Fred Lockley
Island in the Sound by Hazel Heckman
Washington: A History of the Evergreen State by Mary W. Avery
West Coast Journeys: 1865-1879 The Travelogue of a Remarkable Woman by Caroline C. Leighton
Skookum: An Oregon Pioneer Family's History and Lore by Shannon Applegate
Women's diaries of the westward journey by Lillian Schlissel
It Happened in Washington by James A. Crutchfield
Northwest Passage: The Great Columbia River by William Dietrich
Fewer