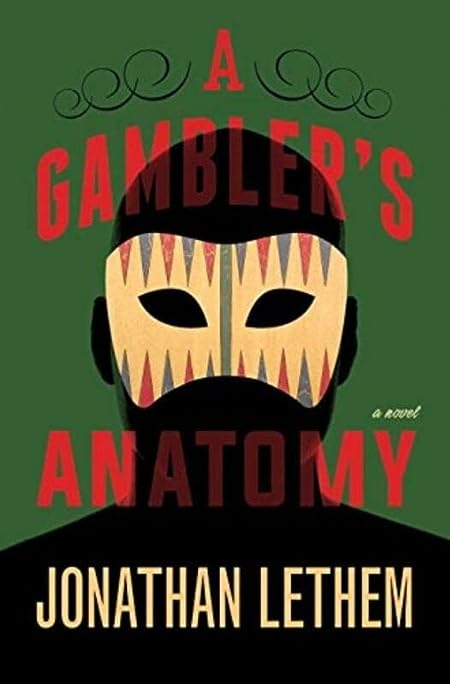 A Gambler's Anatomy: A Novel

An international backgammon hustler, who has amassed a fortune through psychic tomfoolery, develops a large tumor on his face that compromises his vision and eventually threatens his life, forcing him to pursue an experimental surgery and contemplate existential questions. Handsome, impeccably tuxedoed Bruno Alexander travels the world winning large sums of money from amateur "whales" who think they can challenge his peerless acumen at backgammon. Fronted by his pasty, vampiric manager, Edgar Falk, Bruno arrives in Berlin after a troubling run of bad luck in Singapore. Perhaps it was the chance encounter with his crass childhood acquaintance Keith Stolarsky and his smoldering girlfriend Tira Harpaz. Or perhaps it was the emergence of a blot that distorts his vision so he has to look at the board sideways. Things don't go much better in Berlin. Bruno's flirtation with Madchen, the striking blonde he meets on the ferry, is inconclusive; the game at the unsettling Herr Kohler's mansion goes awry as his blot grows worse; he passes out and is sent to the local hospital, where he is given an extremely depressing diagnosis. Having run through Falk's money, Bruno turns to Stolarsky, who, for reasons of his own, agrees to fly Bruno to Berkeley, and to pay for the experimental surgery that might save his life. Berkeley, where Bruno discovered his psychic abilities, and to which he vowed never to return. Amidst the patchouli flashbacks and Anarchist gambits of the local scene, between Tira's come-ons and Keith's machinations, Bruno confronts two existential questions: Is the gambler being played by life? And what if you're telepathic but it doesn't do you any good? -- Provided by publisher.… (more)

Brooklyn born and based Lethem reaches back into his youth, especially his experience living and working in Berkeley, to give an authentic setting to the second half of the novel, a contemporary, but somewhat speculative Berkeley that will conjure all sorts of memories for anyone who has lived there. As he usually does, Lethem weaves an almost magical realist tale that combines the twisting fate of an international gambler (wonderful scenes of backgammon games) with a struggle between anarchists and entrepreneurial capitalists (culminating in a backgammon game played on the grill of an anarchist "slider" shop, with an ending that would require major spoiler alerts--let's just say the backgammon pieces are beef and cheese and things get hot). I kid you not. (Brian)… (more)

LibraryThing member gayla.bassham
Lethem delivers some great sentences in this book: every other pages offers something like "He sought consolation in the idea that he would die within the ancient preserve of Charite, the plague asylum, but in this antiseptic modern wing it was no good. Perhaps they would release him to the streets, and he would expire on the lawn before some nineteenth-century brickwork renamed for a Nazi doctor, or atop a cairn of paving stones." But the story is not great; in fact it's a bit dull, and hard to get a handle on. And Bruno, as a character, left me cold. Lethem remains a beautiful writer, but this novel fails to live up to the promise of his masterpiece, [Motherless Brooklyn].… (more)
6 more
LibraryThing member RidgewayGirl
Back in the day, I read Motherless Brooklyn, Jonathan Lethem's brilliant and emotionally resonant noir about a private eye with Tourette's Syndrome. I always meant to read more by this talented writer, but never got around to it. So when A Gambler's Anatomy began to be reviewed and I found myself with a copy of it in my hands, I was excited to see what Lethem would do with the story of a high-stakes backgammon player, down on his luck.

The book begins brilliantly, with Bruno going to Wannsee, just outside of Berlin, to play backgammon against a man he has been assured will be easy prey. Bruno needs the money; after the disaster in Singapore he's utterly without resources. And those opening chapters are excellent, with the small exception of the stereo-typical younger and attractive woman who is drawn to the desperate and thread-bare Bruno. Bruno's descent coincides with a blot in the center of his vision, one which requires him to look at things through the corners of his eyes and may be related to the headaches and other health issues. The evening in Wannsee does not go well.

From this promising beginning, A Gambler's Anatomy turns out to be just another WMFuN*, where the world and especially the women in it, exist to spotlight what's happening to the self-absorbed main character. Add a long stretch of men being more interested in their own thought-processes than anything around them and the utter relegation of women to helpers and sex and the book ended up being quite a bit less than I had hoped. It's stylistically interesting, in the way a novel by a prominent white guy who has read everything David Foster Wallace ever wrote usually is, but at the expense of any heart whatsoever. Also, Mr. Lethem, it's 2016. Women are no longer merely props. If you can't write them as people, leave them out.

*… (more)
LibraryThing member nivramkoorb
This is my 4th Jonathan Lethem novel and this one is the weakest. The story about a backgammon hustler who discovers a life threatening tumor does not hold up well. It starts in Singapore and Germany and spends much of its time in Berkeley. It deals with lots of social issues with many odd and colorful characters. Lethem is a great writer of prose and dialogue which makes the novel entertaining but it cannot come close to "Motherless Brooklyn" and "The Fortress of Solitude". Those are the Lethem books to read. At less than 300 pages A Gambler's Anatomy is worth a try for a Lethem lover or for those with extra time on their hands. Otherwise go with the other Lethem books I mentioned. You will not be disappointed.… (more)
LibraryThing member sberson
Lethem is always good reading, but this is a notch below his best.
LibraryThing member davidel
Alexander Bruno is a handsome backgammon hustler who lives a playboy life, jetting from city to city, relieving the rich and powerful from their money, seducing women, and moving on. When we meet him, however, he’s on a losing streak and, what’s worse, he is suffering from a strange visual impairment that causes a “blot” right in the middle of his visual field. After Bruno collapses somewhere in Germany in a client’s house and is rushed to the hospital, we learn that he has a rare brain tumor, and that this tumor has not only impaired Bruno’s eyesight but also a mind-reading gift that he has had since childhood. Why does a mind reader with a penchant for gambling choose a game like backgammon, where such a skill confers no advantage? Good question. He learns that there is a doctor in California (where he comes from) who has developed a radical surgery for this previously inoperable type of tumor. But Alexander has no money and no friends, so he figures he’s about to die. A chance meeting with a childhood acquaintance changes his fortunes – his friend, a loser in high school, has become a real estate baron in Oakland, his home town, and offers to pay for his treatment. So Bruno returns to California, where he grew up with a hippy mother on the edge of destitution, a neglected child. The surgery involves the removal of his face (!) – a metaphor for the stripping away of the thin veneer of the glamorous life he had created. The surgery not only leaves him badly scarred, but also back in possession of his psychic gifts – and Alexander is terrified by this. The surgery has also left him beholden to his friend Stolarsky, a manipulative villain whose motive for funding Bruno’s surgery seems to be nothing more than wanting to abase his old acquaintance. Stolarsky’s wife Tina flirts with Alexander, and they end up having an affair – but Tina also seems to want to manipulate him for reasons unknown. And then there’s the German hooker, whom Alexander meets just before his collapse and ends up reentering the story. All told, an interesting but so-so novel. I was expecting more after loving Fortress of Solitude… (more)
LibraryThing member mahsdad
Listened to this on audio. This is my fourth Lethem novel, and I generally love his stuff. This one was OK, but it firmly cemented my opinion that he writes some really weird stuff.

Alex Bruno is an international backgammon hustler. He finds that over time he's developed a "blot" that blocks his vision and begins to affect his game. It turns out that the blot is a growing tumor. It's going to take some radical surgery to correct it and he finds that a super rich/shady friend from high school is willing to fund it. After surgery, along with the tumor being gone, he finds that his game is gone as well. He has to work at his friend's dive-y burger joint to pay him back. There's a lot more here, not the least of which is Alex's self belief that he is a psychic and that those powers help him with this backgammon skills. Its a very odd tale

S: 2/1/19 - 2/16/19 (16 Days)… (more)
LibraryThing member RochelleJones
I so wanted to love this book. It had the makings of a unique and interesting story. Sadly, it lost me with the vocabulary used and the vague and often obscure references. I have a vast vocabulary that is often perceived as supercilious, but Jonathan Lethem presented many words I was not familiar with. I found myself stopping often to look up words that were used but that I was unable to derive meaning from the surrounding context. I love words and learning new ones, but not being able to just read through the story became frustrating. In this book you have both backgammon and medical references that will make it a bit more challenging to follow if you aren't well versed in either, but where my frustration with the references came from was in how the whole story came together. I am unhappy to admit that I may not have gleaned the message that was (or was not) meant to be found due to the odd and obscure way the parts were pieced together. I frankly don't understand the transition that occurred at the ending to wrap the story up. It was just odd.
Having said all that, I did still enjoy the story that was told. I just wish it had been more clear and precise throughout the story.… (more)
Fewer