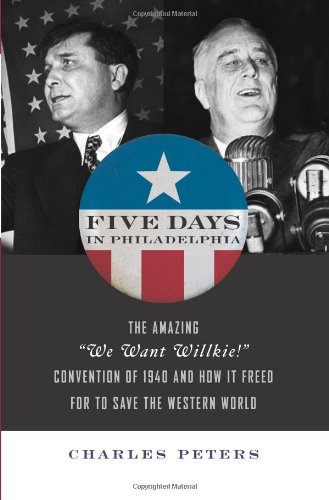 Five Days in Philadelphia: The Amazing "We Want Willkie!" Convention of 1940 and How It Freed FDR to Save the Western World

There were four strong contenders when the Republican Party met in June of 1940 to nominate its candidate: the crusading young attorney and rising Republican star Tom Dewey, two solid members of the Republican establishment, and dark horse Wendell Willkie, utilities executive, favorite of the literati and only very recently even a Republican. The leading candidates campaigned as isolationists. The charismatic newcomer Willkie was a liberal interventionist, just as anti-Hitler as FDR. After five days of floor rallies, telegrams from across the country, multiple ballots, rousing speeches, backroom deals, terrifying international news, and, most of all, the relentless chanting of "We Want Willkie" from the gallery, Willkie walked away with the nomination. As Peters shows, these five days and their improbable outcome were as important as the Battle of Britain in defeating the Nazis.--From publisher description.… (more)

The story of Wendell Wilkie and how he became the 1940 Republican candidate for President as FDR ran for an unprecedented third term is not on told often and mores the pity, really. It was an interesting time, one that author Charles Peters relates to us in an easy to read conversational manner. His folksy style causes one to imagine himself listening to a favorite next door neighbor or kindly grandfather tell an engrossing tale of yesteryear.

The story of one of the last consequential Party conventions in US history is an interesting tale but, unfortunately, I found author Peters not wholly up to the task. Folksy manner aside, he did not present a solidly convincing argument to support his thesis. Perhaps I am too used to more ponderous historical tomes but Peters' more journalistic and colloquial style just didn't satisfy.

This quick reading book does not seem to have much original scholarship. Most of the footnotes reveal the story to be gleaned from contemporary media accounts and secondary sources, but it certainly gives the reader a feel for how the country felt on the eve of the US entry into World War II. Peters also convincingly shows how out of touch the Republican Party of 1939-40 was with the fast as lightning, world shaking events that were occurring on a daily basis and how out of touch they were with many Americans. He also shows how Wilkie was just as much a media creation as a solid, grass roots candidate.

The author suffers from such hero worship of FDR, however, that he seems oblivious to the warts of the Roosevelt administration even as he relates them. Peters acts as if the many missteps, such as FDR's ridiculous court packing scheme, and failed New Deal programs as well as the stagnation of the national economy that FDR caused was unimportant or even somehow quaintly endearing. For instance, on page 44 Peters glows about how much more "generous" FDR's US aid to France was in the early days of the war as Germany was pressing down on beleaguered French forces than was England's. To Peters' credit, he does mention that FDR had an ocean to protect him and the US from German aggression whereas the English had but the channel to serve them, though.

Peters even seems to make the assumption that no other president or presidential candidate could possibly have been up to the task of managing WWII from the US perspective. I would disagree in light of the mash FDR made with his dealings with the Russians as "allies" among other things.

I suppose Peters can be excused for this blind hero worship as it is quite common in jouranalism circles. At one point he even praised FDR imagining him so all knowing that he "could now count on support for his foreign policy from the Republican nominee" once Wilkie was given the GOP nod. Apparently FDR could read the future as far as Peters is concerned.

Even the cover of the dust jacket seems geared to prove that FDR was the "best man" for the job as it portrays a smiling FDR in front of a bevy of microphones in nearly full face view, but a harried looking Wilkie looking way off to the left. Not that Peters chose the cover art, but it is indicative of FDR hero worship, none-the-less.

Also, author Peters is so caught up with modern Democratic Party loyalty he even seems bemused that blacks might have wished to vote Republican in 1940 saying in an offhanded way that the GOP was "still enough the party of Lincoln" to attract some black votes. Even though the GOP fought the Klan and had a strong pro black plank right in its convention platform in 1940. And even though FDR never showed a single interest in American blacks or their plight. Ignoring even his wife's urging, FRD assisted the Unions to exclude black workers from Union jobs and ignored blacks being systematically kept from voting in the south by poll taxes and Jim Crow laws. Roosevelt stuck to his decision to ignore all civil rights issues altogether throughout his four terms in office. Despite Peters' apparent bemusement at blacks voting Republican, no Democrat had given them much reason to vote Democratic throughout FDR's days and for many years thereafter.

But Peters' main thesis is the biggest problem with this book. I was struck by how slim the framework is with which the author supports his theory. Peters wrote this book to expound on the idea that FDR couldn't have assisted the English and French at the start of WWII or institute the draft without Republican assistance and that assistance would not have been forthcoming without Wendell Wilkie as their candidate. As I finished the book I found myself intrigued, but unconvinced and hoping a real historian would take a crack at the idea.

As Peters points out FDR's Democratic Convention in Chicago was in disarray and his supposed "draft" to become the candidate of the Party for president was a sham. Peters feels this shows FDR's weakness to the point where he would not have been effective with his aid to England aims. Yet the president was still stubbornly strong enough in the Party to create this fake draft effort as well as stuff an unpopular Vice-Presidential candidate, Henry Wallace from Iowa, down the convention's throat. Is it likely that he was powerful enough to make such a frivolous expense of his waning power with as simple a thing as a VP candidate yet not with important international policy?

So, on one hand the GOP was strong enough to quash FDR's war aims yet so weak they ended up nominating someone who was practically a mirror of FDR as their presidential nominee. To me it seems that the GOP of 1940 just never had the power to oppose FDR, Wilkie or no Wilkie.

One thing that is a good reminder for us all, though, is Peters' spotlighting of the workings of the media in pre-WWII America. Peters relates how closely the media worked together with two examples in his story. The first example is that most of the high rollers in the media created the Wilkie grass roots steamroller in their editorial rooms, before too many Americans had even heard of him. The second was that those same media figures conspired together to convince the American people of the efficacy of leasing England our mothballed destroyer fleet, thereby setting the precedent of helping the Brits face Hitler.

In today's cutthroat media world, it is hard to imagine them working together for such aims today. Regardless of the much ballyhooed and obvious left leaning bias that forms the undercurrent of much of the reporting done by the today's media, who could imagine them all working as closely together now as they did in WWII?

Another thing is evident. Wilkie did agree with the New Deal and with President Roosevelt in many ways and as the presidential contest gave the White House back to Roosevelt, Wilkie returned to his very vocal and public support of the administration to the detriment of further Republican success. After all, Wendell Wilkie was not a registered Republican having voted Democrat all his life until 1940. No wonder many Republicans in 1940 bemoaned that Wilkie was NO Republican. Unfortunately for the GOP, NO Republican could have beaten Roosevelt in the first place.

So, for an interesting, if not entirely satisfying, read, give Charles Peters' "5 Days in Philadelphia" a try.… (more)