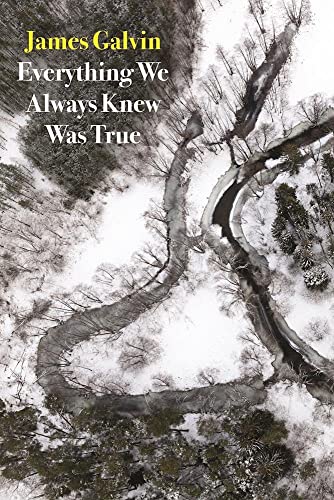 Everything We Always Knew Was True

"James Galvin has a voice and a world, perhaps the two most difficult things to achieve in poetry."--The Nation "Bleak and unsentimental but blessedly free of self-indulgence, these poems give the feeling of being absolutely essential."--Library Journal "Galvin [has] the virtues of precise observation and original language . . . a rigor of mind and firmness of phrasing which make [each] poem an architectural pleasure."--Harvard Review In his first collection in seven years, James Galvin expands upon his signature spare and gnomic lyric as he engages restrained astonishment, desire, and loss in a confessional voice. Whether considering masterpieces of painting or describing the austere landscape of his native Wyoming ranchlands, Galvin turns to highly imagistic yet intimate narratives to rain down compassion within isolation. From "On the Sadness of Wedding Dresses": On starless, windless nights like this I imagine I can hear the wedding dresses Weeping in their closets, Luminescent with hopeless longing, Like hollow angels. They know they will never be worn again. Who wants them now, After their one heroic day in the limelight? Yet they glow with desire In the darkness of closets. James Galvinpassionately depicts the rural American West and the interactions between humans and nature in his best-selling memoirThe Meadowand his novelFencing the Sky. Galvin is also the author of several volumes of poetry and teaches at the Iowa Writers' Workshop. He divides his time between Iowa and Wyoming.… (more)

Eventually One Dreams the Real Thing by Marianne Boruch
So Much Synth by Brenda Shaughnessy
Time Will Clean the Carcass Bones: Selected and New Poems by Lucia Perillo
One Man's Dark by Maurice Manning
ShallCross by C. D. Wright
10 more
Alamo Theory by Josh Bell
Shock by Shock by Dean Young
Sex & Love & by Bob Hicok
Imaginary Vessels by Paisley Rekdal
Green Migraine by Michael Dickman
Incorrect Merciful Impulses by Camille Rankine
What About This: Collected Poems of Frank Stanford by Frank Stanford
Splitting an Order by Ted Kooser
The Poem She Didn't Write and Other Poems by Olena Kalytiak Davis
Faithful and Virtuous Night: Poems by Louise Glück
Fewer