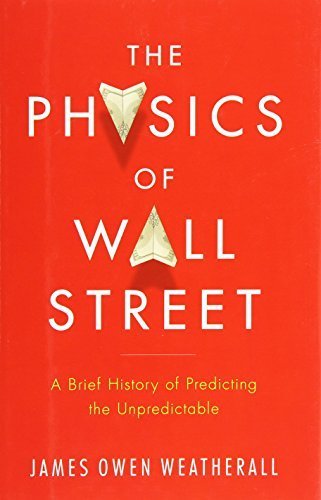 The Physics of Wall Street: A Brief History of Predicting the Unpredictable by Weatherall, James Owen (2013) Hardcover

After the economic meltdown of 2008, Warren Buffett famously warned, "beware of geeks bearing formulas." But as James Weatherall demonstrates, not all geeks are created equal. While many of the mathematicians and software engineers on Wall Street failed when their abstractions turned ugly in practice, a special breed of physicists has a much deeper history of revolutionizing finance. Taking us from fin-de-siecle Paris to Rat Pack-era Las Vegas, from wartime government labs to Yippie communes on the Pacific coast, Weatherall shows how physicists successfully brought their science to bear on some of the thorniest problems in economics, from options pricing to bubbles. The crisis was partly a failure of mathematical modeling. But even more, it was a failure of some very sophisticated financial institutions to think like physicists. Models-whether in science or finance-have limitations; they break down under certain conditions. And in 2008, sophisticated models fell into the hands of people who didn't understand their purpose, and didn't care. It was a catastrophic misuse of science. The solution, however, is not to give up on models; it's to make them better. Weatherall reveals the people and ideas on the cusp of a new era in finance. We see a geophysicist use a model designed for earthquakes to predict a massive stock market crash. We discover a physicist-run hedge fund that earned 2,478.6% over the course of the 1990s. And we see how an obscure idea from quantum theory might soon be used to create a far more accurate Consumer Price Index. Both persuasive and accessible, The Physics of Wall Street is riveting history that will change how we think about our economic future.… (more)

LibraryThing member gdemange
Good book for the novice physicist and the stock market practioner. Physicists seem to be showing up in many other disciplines as well they should since the world largely operates through the laws they have discovered. Mathematics is the basis for physics and similarly for the stock market so why not look at where the two cross. This book is easy to read, gives a good historical background of physicists (scientists) who touched on issues facing markets, and reinforces the idea that predicting the market is in some way predictable. Read it before you dismiss it.… (more)
2 more
LibraryThing member jcvogan1
Story-based overview of some of the various physicists and mathematicians who have done work in finance. Very light on technical detail. Reads quick.
LibraryThing member chellerystick
Hard to stop reading. More about the history of physics on Wall Street than about what the physics of Wall Street is... but that is kind of his point.
Fewer