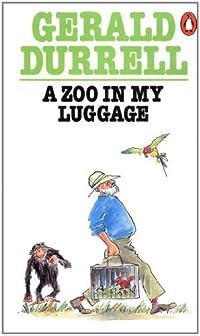 A Zoo in My Luggage

For animal lovers of all ages, the true story of how Gerald Durrell and his wife founded England's Jersey Zoo. The book begins with an account of Durrell's third trip to the British Cameroons in West Africa, during which he and his wife capture animals to start their own zoo. Returning to England with a few additions to their family, they have nowhere to put them as they haven't yet secured a place for their zoo. Durrell's account of how he manages his menagerie in all sorts of places throughout England while finding a permanent home for the animals provides as much adventure as capturing them--From publisher description.

LibraryThing member cookbookkid
For animal lovers who can laugh at all the silly things animals do. The story is about a man who goes to collect animals to start a zoo. Most of the story is set in Africa. The ending was the only disapointing part is was lacking the hummor the rest of the book employed.
4 more
LibraryThing member BoundTogetherForGood
Interesting but not quite as good as I expected.
LibraryThing member IonaS
This is another enjoyable and amusing book by Gerald Durrell, an account of one his animal-collecting expeditions to Bafut in the British Cameroons in West Africa. I didn´t know where this was and had to look it up in my atlas; the country must now have changed its name.

Previously, while collecting animals in that country, Durrell had been permitted to stay in the Palace of the Fon of Bafut. I don´t know what a Fon is, neither could I find the word in any dictionary, but Durrell states that he was a “potentate”. The Fon in question has innumerable wives and hordes of children; he is tall, elderly, and extremely entertaining.

Durrell had written about the Fon following a previous stay with him, but had become afraid that his portrait of him might have been “open to misconstruction” and the Fon might have felt that Durrell had portrayed him as a senile alcoholic. So prior to the present trip he writes to the Fon asking with some trepidation whether he, his wife Jacquie and his team might again be allowed to enjoy his hospitality. It turned out however that the Fon had been most flattered by the unexpected fame he had encountered after being depicted in depth in Durrell´s book (I don´t know yet which one that was); many Europeans had visited the Fon with Durrell´s book in their hands, and the Fon had ended up autographing all these books, as though he himself had been the author!

Durrell and wife are accommodated in the Fon´s Rest House and their extra team of two arrives later; many of the locals begin to queue up outside with animals (“beef”) they have collected to sell to them, news of their arrival having hastily spread.
We´re apprised of the antics of a baby black-eared squirrel they receive, called Squill-bill small and of Bug-eyes, a needle-clawed lemur. On reading Durrell´s books we realize that each individual animal has its own distinct personality, just as we humans do.

When talking to the Fon and the other locals, Durrell and the others use a form of pidgin English, only half of which I for one could understand.

The Durrells and the Fon enjoy many entertaining get-togethers, with much dancing, singing and drinking, not least the latter.

They are presented with many monkeys, and one of their favourites is a half-grown female baboon called Georgina. She has “a wicked sense of humour”, and this leads to many both amusing and less amusing escapades.

Back in England, Georgina runs riot in a large department store, so they require the aid of two constables together with Durrell´s sister Margo to capture her.

At the end of the book, Durrell by a stroke of serendipity finds a suitable place to deposit his animals and set up his zoo – in Jersey.

Durrell is a master story-teller and recounts innumerable riotous episodes.

To sum up, another delightfully entertaining book by Gerald Durrell, though perhaps it does not quite reach the level of “My family and other animals”, which is my favourite. The writing is excellent, there are many fascinating descriptions of the various animals´ behaviour, and humour abounds!… (more)
LibraryThing member leslie.98
I enjoyed this nonfiction book but don't think it was quite as good as some of the other Gerald Durrell books I have read. Maybe I should have read it rather than listening to the audiobook...
LibraryThing member PhyllisH
My least favorite of the Durrell books.
Fewer