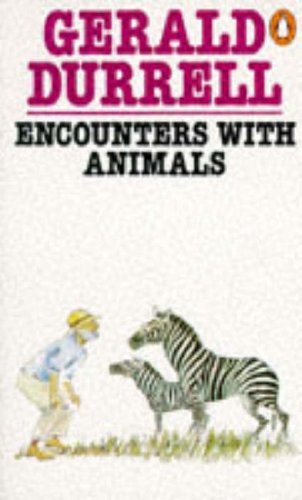 'I once travelled back from Africa on a ship with an Irish captain who did not like animals. This was unfortunate, because most of my luggage consisted of about two hundred odd cages of assorted wildlife . . .' Gerald Durrell's accounts of the animals he encountered on his travels were some of the first widely shared descriptions of the world's most extraordinary animals. Moving from the West Coast of Africa to the northern tip of South America - and elsewhere - Durrell observes the courtships, wars and characters of a variety of creatures, from birds of paradise, to ants and anteaters, among others.

LibraryThing member reading_fox
One of those odd instances of books you thought you wanted to read, only to discover you have already read them, as a subtle sense of familiarity creaps through each 'new' encounter. This did take some of the gloss off. The book is the scripts to a series of lectures Gerry presented to the BBC over time, and as such are all very seperate from each other. Some of the material has been covered in other books - and some of the details are not precisely the same!

It is divided into a few sections, but these seem almost arbitary to the contents. Most of the incidents come from his animal collecting expeditions but there are also several from his boyhood tales of life in Corfu. The animals are always portaryed with sympathy and anthromorphism. A charge to which he pleads guilty later on in the book. You can't help but smile at the situations he gets into.

Slightly disjointed, but overal another wonderful outing of Gerald's gentle umour and endearing creatures. Maybe not hte best place to start with from his books, but given how much material is repeated elsewhere, it probably isn't ideal for omeoen who has read most of his other books either.… (more)
1 more
LibraryThing member whitreidtan
I first stumbled across Gerald Durrell's My Family and Other Animals several years ago and loved it. And while I didn't track down the Masterpiece Theater piece of that book as threatened, I did track down another of his books, serendipitously found in the "free" box at a used bookstore. Encounters with Animals is a collection of essays culled from Durrell's BBC broadcasts about animals and animal behaviour over the years.

Each of the essays is fairly short and describes Durrell's collecting of animals for zoos, how certain exotic animals behave in wild, and the always entertaining bits about the animals the Durrell family has lived with in their home. Because these essays are pulled from radio broadcasts, they are very descriptive in drawing the animal in question in the reader's (and originally, the listener's) mind's eye. Durrell is an entertaining writer, personifying the animals about whom he writes but also being mindful of their natural lives. The essays are homely and sweetly humorous and provide a gentle introduction to exotic animals, their habits, and their habitats. Durrell is, as always, an accessible, lovely writer but this collection seems as if it would be more satisfying if it was listened to, as originally conceived, rather than read. Still a nice collection for naturalists to dip into, it just doesn't quite shine the way that My family and Other Animals does.… (more)
Fewer