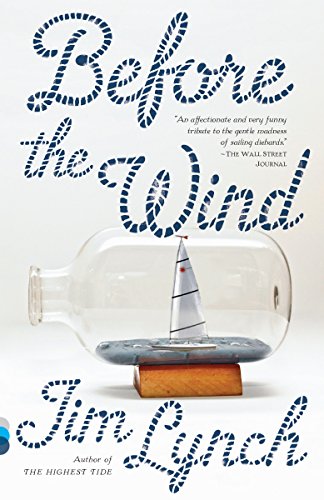 Before the Wind: A Novel (Vintage Contemporaries)

Joshua Johannssen has spent all of his thirty-one years among sailboats. His grandfather designed them, his father built and raced them, his mother knows why and how they work (or not). For Josh and his two siblings, their backyard was the Puget Sound and sailing their DNA. But both his sister and brother fled many years ago: Ruby to Africa and elsewhere to do good works on land, and Bernard to god-knows-where at sea, a fugitive and pirate. Now pushing thirty, Josh - who repairs boats of all kinds in a Steinbeckian marina south of Seattle - is still pained by whatever it was that went wrong with his damn family. But when the Johannssens unexpectedly reunite for the most important race in these waters - all of them together on a historic vessel they made decades ago - they will be carried to destinies both individual and collective, and to a heart-shattering revelation. Past and present merge seamlessly and collide surprisingly as Jim Lynch reveals a family unlike any other with the grace and humor and magic of a master storyteller.… (more)

LibraryThing member nbmars
Jim Lynch is known for novels that are fertile explorations of microcosms of humanity that blossom into reflections of the complex whole. In Before the Wind, Lynch applies this technique to a story about the world of sailing, and an examination of a family intimately involved with the sailing business, the Johannssens.

Josh Johannssen, 31, going back and forth in time in alternating chapters, narrates what happened the last time his family experienced any harmony, before, as he puts it, his family's "big bang." Most of the Johannssens were legendary in the sailing world and had outsized personalities, except for Josh. Josh’s father won a medal in the sailing Olympics, and raised his three children (Bernard, the oldest, Josh in the middle and Ruby the youngest) to be sailors as well, applying his perfectionist standards to their training. His unspoken goal, as Josh perceived it, was “to create a dynasty of Olympic-caliber racers….”

Ruby turned out to be the best sailor of all of them; she had a sense of the wind that inspired awe among other sailors. Bernard was more of a rebel with a temper he couldn’t always control, and he went on to live a somewhat spectacular life as a pirate and smuggler. Josh stayed behind to carry on in the boat-building business as the Johanssens had always done, albeit in an Olympia boatyard instead of with his father and grandfather back in Seattle. Josh was always smoothing things over, whether with his family or his acquaintances, much as he patched holes and sanded floors on boats, trying, according to his younger sister Ruby, “to keep everything and everybody intact.” It was his role in his family as well as in his career.

Josh lives on board a boat in the marina where he works, amidst a motley group of other “liveaboards.” The denizens of the marina and Josh's regular customers represent different visions of the quality and meaning of life. Josh thinks himself disappointingly ordinary, but like Doc in Steinbeck's Cannery Row, he is the glue that makes all of them into a “family.”

Josh’s original family scattered to the four winds after a big blow-up following a race in which Ruby was competing. Nevertheless, Josh's father gets a new boat for Josh to rehab just in case the whole family might come back together this year for one last race - the annual Swiftsure International Yacht Race that begins and ends near Victoria Harbour. But it is uncertain if they can all make it, for each has problems that even Josh can’t solve.

Discussion: This story considers the often overlooked difficulties that can ensue in trying to forge your own identity in light of the expectations of your family. Apt commentaries about family are occasionally made by Noah, a worker in Josh's boatyard and a one-man Greek chorus, in the form of quotations from the movie "The March of the Penguins."

Physics is also a strong motif. This is not only because sailing involves successful utilization of so many laws from physics, from the motion of sailboats, to how to adjust the sails to move through changes in the wind and water, to the effect of tides, velocity, and momentum. Josh’s mother was a high school physics teacher, and she influenced Josh as much as his dad did. Josh often thinks about the fact that sailing happened to be a favorite pastime of Albert Einstein. What was it about sailing that so appealed to this intellectual giant? Did the elemental meeting of land and sky inspire some of his ideas about the nature of the universe? Did it contribute to his understanding of gravity? Indeed, one might say the question of gravity, at least in its metaphorical sense, is one that preoccupies Josh, as he considers what it would take to pull the family back in one place again for another sailboat race. [Technically of course, according to Einstein's Theory of General Relativity, gravity is not a force but rather the result of space-time warping around massive objects. Nevertheless, the fact that it is commonly thought of as something that pulls on you makes it an appropriate way to explain Josh's concerns.]

Many sailors such as Ruby just have a “second sense” of forces acting on a sailboat without understanding the science behind it. But others, like Josh's mom, go to great lengths to understand these laws. In fact, she is striving to solve the Navier-Stokes equations that describe the motion of fluids, such as ocean currents, the effects of turbulence on waves, and chaotic water flow generally.

But “chaos” can affect families too. How best to understand the dynamics that pull people apart and bring them together? The basic forces of physics can all be applied metaphorically to relationships, as can the phenomenon of quantum entanglement, more popularly known by Einstein’s designation as “spooky action at a distance.” This means that once (quantum) particles have been together, they essentially thereafter behave in ways related to one another, even if they happen to be at the opposite ends of the universe. This is also an apt way to describe the effect family members have on one another, long after they have gone their separate ways.

And finally, there appears another common theme in Lynch's books: an appreciation for both the beauty of, and humor in, the teeming life on earth, with its many varieties, vagaries, and - among humans - struggles to find meaning within a limited lifespan in an aleatory world. Lynch, through Josh, makes of Capital City Boatworks a Cannery Row, with the Johannssens offering an even closer look at the chaotic fluid determination of morality, family, identity, and love.

Evaluation: Jim Lynch is an excellent writer. His books are not quick reads, but rather are thoughtful explorations of characters who, no matter their particularities, are limned with sympathy and affection. His stories are also meditations on the diversity of all life on earth, the wonder it holds, and the importance of paying attention to everything around you and appreciating it while you can.… (more)
1 more
LibraryThing member zmagic69
Easily the most boring book I have read in a long time.
The family is not interesting, there is zero story or plot to the book.
This book is only recommended if you really really love to sail, talk about sailing, spend most of your time around boats, or wishing you were around boats. Otherwise forget it.… (more)
Fewer

Truth Like the Sun by Jim Lynch
Border Songs by Jim Lynch
The Highest Tide: A Novel by Jim Lynch
Language Arts by Stephanie Kallos
The Big Seven by Jim Harrison
14 more
Prudence by David Treuer
The Living: A Novel by Annie Dillard
A Sudden Light by Garth Stein
Last Bus to Wisdom: A Novel by Ivan Doig
The Given World by Marian Palaia
West of Here by Jonathan Evison
Everybody's Fool: A novel by Richard Russo
The Bartender's Tale by Ivan Doig
A Gambler's Anatomy: A Novel by Jonathan Lethem
The Orchardist: A Novel by Amanda Coplin
BY Canin, Ethan ( Author ) [ A Doubter's Almanac ] 02-2016 Hardcover by Ethan Canin
The Seawolf by Jack London
Snow Falling on Cedars by David Guterson
The Whites by Richard Price
Fewer