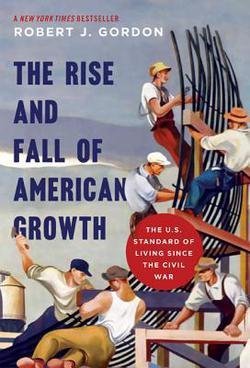 The Rise and Fall of American Growth : The U.S. Standard of Living Since the Civil War

The Princeton Economic History of the Western World (2016)

Examines the economic growth of the United States since the Civil War, arguing that the rate of growth between 1870 and 1970 cannot be repeated and that a number of issues are further stagnating the already slow rate of productivity growth."In the century after the Civil War, an economic revolution improved the American standard of living in ways previously unimaginable. Electric lighting, indoor plumbing, home appliances, motor vehicles, air travel, air conditioning, and television transformed households and workplaces. With medical advances, life expectancy between 1870 and 1970 grew from forty-five to seventy-two years. Weaving together a vivid narrative, historical anecdotes, and economic analysis, The Rise and Fall of American Growth provides an in-depth account of this momentous era. But has that era of unprecedented growth come to an end? Gordon challenges the view that economic growth can or will continue unabated, and he demonstrates that the life-altering scale of innovations between 1870 and 1970 can't be repeated. He contends that the nation's productivity growth, which has already slowed to a crawl, will be further held back by the vexing headwinds of rising inequality, stagnating education, an aging population, and the rising debt of college students and the federal government. Gordon warns that the younger generation may be the first in American history that fails to exceed their parents' standard of living, and that rather than depend on the great advances of the past, we must find new solutions to overcome the challenges facing us. A critical voice in the debates over economic stagnation, The Rise and Fall of American Growth is at once a tribute to a century of radical change and a harbinger of tougher times to come."--Publisher's description.… (more)

LibraryThing member TheoSmit
Not an easy read but well worth the trouble and certain to give you lot to think about.
3 more
LibraryThing member annbury
This book provides a compelling look back at the sources of US economic growth, and a disquieting look forward at future prospects. Question: Is the disappointing rate of growth in the US since the financial crisis a temporary effect that will be cured by technology, or is it a long run situation to which we will have to adjust, politically as well as economically? Professor Robert Gordon argues that the problem is long term, because the "base case" 2-3% U.S. growth rate that underlies most economists' thinking is no longer the base case. Technology is generally seen as the cure to any long run slowing, but this book argues that it is unlikely to restore the old paradigm. This is a critically important argument in the real world, particularly when combined with the rising inequality that has already slowed growth in most American's incomes.

"The Rise and Fall of American Growth" is an exhaustive work, and gains much of its strength from the sheer weight of argument and example it provides. But to try to summarize, between 1870 and 1970 US technological progress and economic growth exploded. That changed almost everything about the way people lived, worked, and interacted with one another. Since 1970 and especially since 2000, growth has slowed even though technological progress has continued. Many assume that technology will once again push growth rates higher, but Professor Gordon argues that the miracle century was a one time process that cannot be repeated. He first shows how technological change -- reinforced by economic reorganization, both public and private -- changed every aspect of life between 1870 and 1940. Then, he considers the 1940-1970 period, when growth remained high even though people's lives changed far less drastically. And then he considers 1970 to date, during which overall growth has slowed sharply, reflecting a sharp drop in productivity growth. That's despite what he terms the Third Industrial Revolution -- the computer and communications revolution. The First and Second Revolutions affected almost every aspect of life, he argues, but the Third affects the relatively narrow sphere of communication. Because of a smaller share of the economy is involved in the Third Revolution, its impact on overall productivity growth -- and hence on economic growth -- is far smaller.

To make matters worse, Professor Gordon cites a number of headwinds that will make any lasting recovery in growth rates even harder to achieve. The most critical of these is rising inequality, which by some measures has left the real incomes of the middle class unchanged for forty years. That reflects (and feeds into) a worsening US performance in education, rising government debt, and excessive regulation. Then, there is the demographic problem -- labor force growth is slowing as the boomers retire, and the "dependency ratio" -- the number of non-working people relative to the number of workers -- is rising. Finally, Professor Gordon briefly notes climate change. He ends with a series of policy prescriptions, centered in large part around more (and earlier) education and around redistribution via tax changes. The policy prescriptions don't feel very convincing given the weight of the problem the professor describes.

Clearly, Professor Gordon puts a lot less weight on technology than do many other economists. There is no way of knowing in advance whether or not he is right, and some vociferously disagree. Still, this book is a strong antidote to any tendency to wave one's hand and say "oh, technology will take care of it". It's also an interesting and compelling, if at times daunting, read.… (more)
LibraryThing member LynnB
An interesting, well-written book. The author was able to really bring to life the different time periods he discusses. But, it could have been so much shorter -- lots of repetition.

Robert Gordon argues that the new technologies in information and communications don't pack the same economic punch as the industrial revolution and the wide-spread availability of electricity and the internal combustion engine. For this reason, he is pessimistic about the prospect for maintaining past rates of economic growth. But, does he really understand the full economic impact of such a broad range of technologies and how they will change the nature of work. He also remains solely focused on the U.S.A., ignoring the global context of growth in other countries (like China and India) and what impact that might have in North America. So, maybe he's too pessimistic about the future?

What concerns me the most is the implications for public policy. This book asks an important question: Is the disappointing rate of growth in the US since the financial crisis a temporary effect that will be cured by technology, or is it a long run situation to which we will have to adjust, politically as well as economically? Professor Robert Gordon argues that the problem is long term. And that's a hard message for any politician to give. So, how can our policies reflect the new reality if we can't admit to what that reality is? Maybe his pessimism is warranted after all.

Whether you are optimistic or pessimistic about the way technology will continue to change our economic lives, this book provides a truly extraordinary economic history and plenty of food for thought about what it means for the future.… (more)
LibraryThing member gregdehler
Wow. This is an amazing work! Don't let anyone tell you that economics cannot be interesting. I especially recommend it to my historian friends who want economical-social survey from the end of the Civil War to the current day. Gordon argues that 1870-1970 was the period of American growth. Its really 1900-1940 that is the most significant time frame as radical improvements are made to food, health care, living conditions, sanitation, transportation, etc. He argues that GDP is terrible metric. For example, it does not include a longer lifespan. Also, it did not measure automobiles until the early 1930s, long after Henry Ford's Model T was rolling off the assembly line. Gordon factors these into at the creation of a real GDP, and includes items like labor saving devices, medicine, food (processed food in the late 19th and early 20th century was a tremendous positive), sanitation, etc. He is deeply alarmed by the changes that have taken place since 1970, especially the great disparity in wealth distribution. There are thousands of impressive facts, arguments, and references in this book. Too many to list in a short review, but it is certainly an eye-opener.… (more)
Fewer

Capital in the Twenty-First Century (Hardcover)--by Thomas Piketty [2014 Edition] ISBN: 9780674430006 by Arthur Goldhammer Thomas Piketty
These Truths: A History of the United States by Jill Lepore
Dark Money: The Hidden History of the Billionaires Behind the Rise of the Radical Right by Jane Mayer