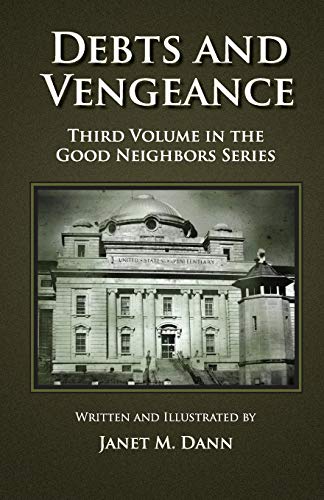 The third in the Good Neighbors Trilogy, Debts and Vengeance deals with issues of debts owed by the Dacia family and of mob vengeance. It is the early summer of 1933 and the Dacia family on their farm in South Dakota agrees to care for the two Epstein children of New York City for the summer while their parents and grandmother make a perilous trip to Germany.The children of the two families are just getting to know each other when Michael-Joseph Dacia and Daniel Epstein, both eight years old, are kidnapped by the mob in an act of vengeance. The Italian and Greek mobsters from Irina are in Leavenworth Federal Penitentiary, and they are furious with those mentioned in August Wagner's song, The Dakota Six. Those six farmers who were responsible for their incarceration and who got the rewards for their capture and the return of their stolen goods. Those six farmers who mock them in August Wagner's song and who cause others to do the same.Among other things, vengeance on August Wagner and the Dacias involves luring August and several members of the Dacia family, including Irina, on a road show tour through South Dakota, Wyoming, Montana and North Dakota. The plot against August involves a series of bare-fisted, illegal boxing matches in dank warehouses by railroad tracks or out behind stock pens at a fair. Horse races, new love, a huge Italian wedding and more mob vengeance all help bring issues to a head as Josif Dacia and his family become a part of the American attitude which is the same in South Dakota as it is in New York City: neighbors helping neighbors, even if they live half way across the country!… (more)

As one large epic I found the trilogy far more interesting than I had anticipated. I often appreciate large family story arcs but rarely find them really to my liking. One element that makes this trilogy more appealing to me is that rather than spanning a century or two it takes place in the early 20th century, a period that I find more interesting than some others. It also encompasses both rural and urban settings and conflicts, as well as how the personal obstacles reflect both national and international issues and events. From the dust bowl depression through a growing European crisis, from fierce independence to the irrational bigotry we still face today. This mixture kept the story interesting even during any sections where I was less engaged.

I found The Good Neighbors to be the least favorite of the three for me but it was still enjoyable and is essential to setting the stage for the latter volumes, which suited my interests far more. Irina was very interesting. I liked the way people came together (for the most part) to help each other when trouble arose. Immigrating is never an easy decision or process and political and criminal intrigue just makes the process harder and far more dangerous. Finally, in Debts and Vengeance, the themes of resilience and community come together. Community is not always local. This seems obvious in our current social media world but in the 1930s there was also a sense of community, even if the people are almost an entire country apart in distance.

I would recommend these to any reader who enjoys immersion in an historical period and in a family's plight. While I think any one could be read as a standalone I think the reward of reading is well worth the time investment. There will be peaks and valleys, both within the narrative as well as with your engagement, but the peaks are more numerous and you will feel like you have known these people in real life by the time you finish.

Reviewed from copies made available through Goodreads First Reads.… (more)