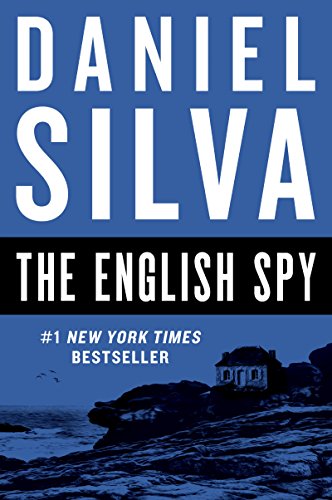 The target is royal. The game is revenge. She is an iconic member of the British Royal Family, beloved for her beauty and charitable works, resented by her former husband and his mother, the Queen of England. When a bomb explodes aboard her holiday yacht, British intelligence turns to one man to track down her killer: legendary spy and assassin Gabriel Allon. Gabriel's target is Eamon Quinn, a master bomb maker and mercenary of death who sells his services to the highest bidder. Fortunately Gabriel does not pursue him alone; at his side is Christopher Keller, a British commando turned professional assassin who knows Quinn's murderous handiwork all too well. And though Gabriel does not realize it, he is stalking an old enemy - a cabal of evil that wants nothing more than to see him dead. Gabriel will find it necessary to oblige them, for when a man is out for vengeance, death has its distinct advantages.… (more)

This story contains a fascinating combination of plotting Russians, battling British, and even the Irish, still fighting an old religious war, and all those groups create a fine story. Double-crossings, old sorrows, loyalty, love, hate, all set in accurately described locations.

The novel’s end feels like it might be the conclusion of Allon’s career as a field operative, but certainly not the end of his story. I think readers can expect riveting things in the future involving the new head of '”The Office.” This story can be read as a stand-alone novel but the recurring characters are more enjoyable if the reader has read some of the prior books. No one does spy thrillers better than Daniel Silva and I can't wait to see what happens in the next book. 4.5 Stars… (more)
LibraryThing member chasidar
Daniel Silva does not disappoint
LibraryThing member repb
I am a loyal Silva fan and polished off his newest rather quickly. I love his writing style, descriptions and locations used in his novels. Gabriel Allon is obviously moving into another chapter of his Israeli secret service and about to become head honcho and will share the limelight with Keller, a British counter part who played his sidekick in this novel. Surprising to me, he works the F word in three or four times but overall, is very careful in his language and absence of lurid sex scenes. Although not objectionable, I find his tales really follow a formula and are very predictable. Still I love his work although I wish he would be more creative in his titles which are so very similar.… (more)
LibraryThing member labdaddy4
I simply do not get tired of the author's novels - every one of which has the same lead character. Silva's book are very well written, loaded with suspense, and faced paced. I find the increased role of Keller to be a big plus even though this book had very little regarding Allon's amazing team of operatives. Keep it up Daniel Silva - I will keep reading.… (more)
LibraryThing member buffalogr
Gabriel Alon's nemesis this time is an IRA bomb maker. One wonders why the Israeli's stuck their fist in that tar baby? It makes a moderately good story, however. There's a lot of back story needing explanation. Silva's understanding of regional politics makes the book better. After several Gabriel Alon novels, the characters seem predictable.… (more)
LibraryThing member purpledog
Spy thrillers are not my go to genre. Therefore, when I saw The English Spy by Daniel Silva in the $2 hard cover bargain bin I almost did not buy it. Alas, the front cover caught my attention and the back cover sealed the deal. Well worth $2 and more.

The story is so well crafted and I was drawn into the web of spies and revenge from the get go. Even though I have not read any of the other books in this series, I really got into the character of Gabriel Allon. I will definitely have to read more of the books in this series.

I highly recommend this to readers of espionage/spy themed books and for those who just like a good story, you need to read this too.… (more)
LibraryThing member MichaelHodges
Hi-speed read, a great distraction, maintains formula over 16 books for sure, you will eventually really know Gabriel, once in retirement. You have got to love the "Cold War"
LibraryThing member librarygeek33
Had to read halfway through the book until we were let in on the details of the confusing plot. Finally, after about 500 pages, the tension mounted and then...and then......it just ...ended.
LibraryThing member msaucier818
It is hard for me to objectively review the Gabriel Allon's books at this point. I really enjoy the characters and always love the storytelling in this series. This particular offering was not as good as others in the series. It did bring in many former side characters from the series and as always, it moved the back story of Gabriel and his family along as well. High recommended series.… (more)
LibraryThing member libgirl69
Great story, always well written with twists and turns that you didn't see coming and hoped wouldn't. It brings back another 'old friend' Keller, and this time another blast from the past in the guise of the IRA. Possibly this story has more resonance if you have a UK background, as it evoked memories from my childhood, when Gerry Adams wasn't allowed to have his voice heard on the news, and had to have a voice over.… (more)
LibraryThing member gypsysmom
I have read a few of this mystery series which star Gabriel Allon as the sleuth. This one was a little different in that Allon teams up with another person and they know exactly who they are looking for. The mystery lies in where he might be found and what he looks like after plastic surgery.
In the Caribbean an English princess and a few select friends have chartered a yacht for a pleasure cruise. In the middle of the night the ship explodes killing all aboard; the bombmaker, an ex-IRA man called Quinn, escaped on a life boat. Britain’s MI-6 determines Quinn is responsible and the head asks Allon to track him down. Allon is reluctant because he is about to head to Jerusalem with his very pregnant wife where he will become head of Israel’s secret service. However he is persuaded because Quinn was involved with a bombing attempt on his own life which killed his young son. Allon teams up with another man who has his own reason to want Quinn dead. Christopher Keller was with the SAS in Northern Ireland and he was captured by Quinn. He managed to escape but Quinn killed the woman he loved.
Quite a gripping tale that moves around the world.… (more)
LibraryThing member decaturmamaof2
This was a good one! Some of its predecessors seemed a bit rote.
LibraryThing member kimkimkim
Once again I was sucked in from the first page. I find it so interesting how Daniel Silva is able to parse the real into fiction and I am always left wondering, despite the disclaimers, is it really fiction?!
Fewer