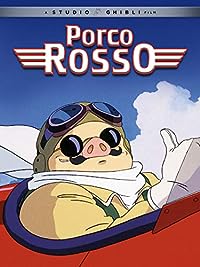 Slouching towards middle age, Porco Rosso makes his living by flying about in his red bi-plane and fighting sky bandits who prey on cruise ships sailing the Adriatic. When he's not engaging in dog fights, this pilot lives on a deserted island retreat. Porco was once a strappling young man, but after his entire squardron was wiped out, he is mysteriously transformed into a pig. Then he is defeated in a dogfight against a dashing American rival, who has been hired by the dastardly bandits. With his plane damaged, he finds a repair hanger near Milan where a local woman fixes his plane.