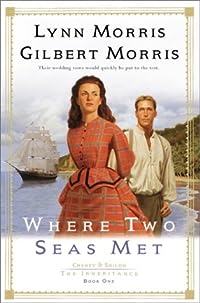 Cheney and Shiloh: the Inheritance (1)

Newlyweds Cheney Duvall and Shiloh Irons-Winslow are enjoying an idyllic honeymoon aboard a ship in theWest Indies. But when a fierce storm interrupts their carefree days, Cheney and Shiloh find themselves on a small island facing a mysterious illness. Quarantining the island and the ship's crew, Cheney and Shiloh work themselves to exhaustion as they care for those infected with the highly contagious disease. When Cheney collapses, Shiloh fears the worst. Has their love overcome all odds only to be tragically cut short? Since his plot to ruin Cheney was exposed, Bain Winslow has fled New York and is now the owner of a large spice plantation-on the same island where Cheney and Shiloh are caring for the plague victims! Discovering the island has been quarantined, Bain rages against Cheney and Shiloh, refusing any attempt at reconciliation. Will Bain ever accept Shiloh as the legitimate heir to the Winslow fortune?… (more)

LibraryThing member Barbara31542
Good follow-up work. I love reading about This period and challenges they faced. Love the book.