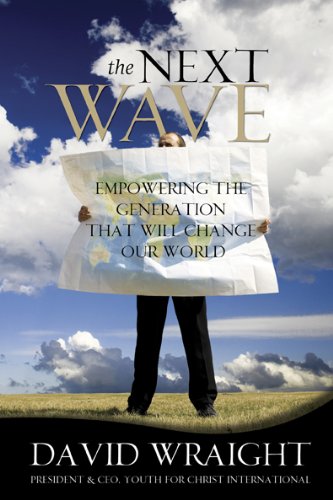 The Next Wave: Empowering the Generation That Will Change Our World

In his book "The Next Wave" David Wraight contends that when young people are given the freedom to lead, abundant fruit is produced. Their simple faith in God constantly generates courageous and creative initiatives, and their connectedness to the cutting edge of societal change allows them to be relevant and effective in their mission strategies. They have boundless energy and an absolute belief in the God of the impossible. "The Next Wave" proposes that recognizing young people as leaders for today-and 'allowing' them to lead-opens up the potential for exceptional growth in mission effectiveness. This is clearly supported by a review of biblical and church history, where we find many examples of faithful, energetic and courageous young people being used by God to bring about change, renewal and blessing. In fact, every major mission movement over the past 200 years has been instigated and populated by young people, mostly in their early twenties. When young people are mobilized in large numbers they have an enormous synergistic capacity to bring about change. Throughout history there have been numerous political leaders who have recognized the collective world-changing potential of youth and have used the youth of their nation-often with destructive and brutal agendas-to alter the course of history. Some classic examples of this are Adolph Hitler with his Hitler Youth movement and Mao Zedong with his Red Army. As globalization and modern technology continue to shrink our world, we are presented with a new landscape that contains amazing possibilities for world change. People are connecting worldwide as never before-particularly young people-overcoming cultural, geographical, language and ethnic barriers with ease. There is an emerging 'global consciousness' and young people want to be a part of it. No longer are we talking about one nation of youth being mobilized and empowered, but we now have to grapple with the implications of a 'globally connected' youth community mobilizing to bring about world change on a scale never seen before. In "The Next Wave", David Wraight suggests that we stand at the threshold of potentially the largest global mission movement this world has ever seen-a mission movement driven and fueled by young people. And as this movement develops it is essential that the Church proactively engages missional young people, because the catalyst for this movement will essentially be a collective empowerment of young people by the Church. No longer should young people be viewed as 'leaders for the future', the Church needs to see young people as the leaders for 'today', and allow them to lead us into new arenas of effective ministry and mission. However, making the most of this global mission opportunity doesn't only involve freeing an emerging generation to lead, sending them on their way, wishing them well, and trusting that God will use them to reach the world. Each of us has a key role to play in supporting and serving this world-changing generation. To be able to achieve their full potential, young people need us to believe in them, to stand with them, cheering them on, providing affirmation and solidarity. Christians of all ages need to pray for them and with them, mentor them, encourage them, equip them, protect them, and affirm them as they lead. Rich with real-life stories, anecdotes and sound biblical investigation, "The Next Wave" makes a compelling case for a unique empowerment and mobilization of young people that has the potential to turn our world upside down and advance God's Kingdom as never before in the history of humanity.… (more)