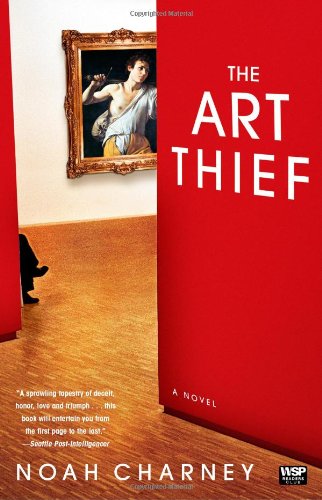 The Art Thief: A Novel

"Rome: In the small Baroque church of Santa Giuliana, a magnificent Coravaggio altarpiece disappears without a trace in the middle of the night." "Paris: In the basement vault of the Malevich Society, curator Genevieve Delacloche is shocked to discover the disappearance of the Society's greatest treasure, White-on-White by Suprematist painter Kasimir Malevich." "London: At the National Gallery of Modern Art, the museum's latest acquisition is stolen just hours after it was purchased for more than six million pounds." "In The Art Thief, three thefts are simultaneously investigated in three cities, but these apparently isolated crimes have much more in common than anyone imagines. In Rome, the police enlist the help of renowned art investigator Gabriel Coffin when tracking down the stolen masterpiece. In Paris, Genevieve Delacloche is aided by Police Inspector Jean-Jacques Bizot, who finds a trail of bizarre clues and puzzles that leads him ever deeper into a baffling conspiracy. In London, Inspector Harry Wickenden of Scotland Yard oversees the museum's attempts to ransom back its stolen painting, only to have the masterpiece's recovery deepen the mystery even further." "A dizzying array of forgeries, overpaintings, and double-crosses unfolds as the story races through auction houses, museums, and private galleries - and the secret places where priceless works of art are made available to collectors who will stop at nothing to satisfy their hearts' desires."--BOOK JACKET.… (more)

The Art Detective: Fakes, Frauds, and Finds and the Search for Lost Treasures by Philip Mould
Priceless: How I Went Undercover to Rescue the World's Stolen Treasures by Robert K. Wittman
Provenance: How a Con Man and a Forger Rewrote the History of Modern Art by Laney Salisbury
The Forger's Spell: A True Story of Vermeer, Nazis, and the Greatest Art Hoax of the Twentieth Century (P.S.) by Edward Dolnick
Loot: The Battle Over the Stolen Treasures of the Ancient World by Sharon Waxman