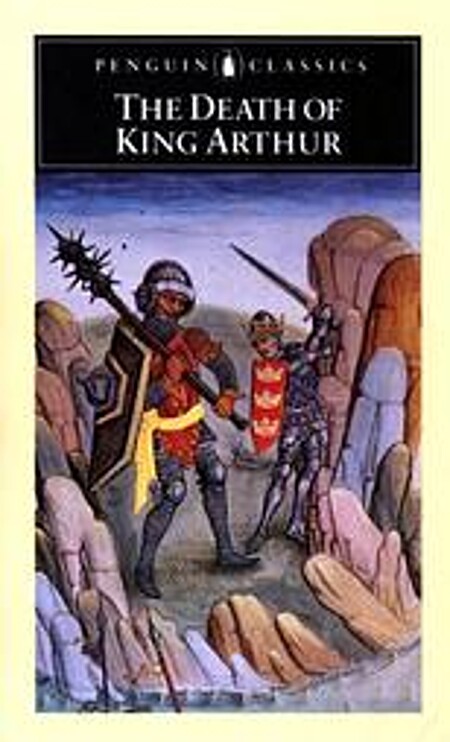 The Death of King Arthur

Recounting the final days of Arthur, this thirteenth-century French version of the Camelot legend, written by an unknown author, is set in a world of fading chivalric glory. It depicts the Round Table diminished in strength after the Quest for the Holy Grail, and with its integrity threatened by the weakness of Arthur's own knights. Whispers of Queen Guinevere's infidelity with his beloved comrade-at-arms Sir Lancelot profoundly distress the trusting King, leaving him no match for the machinations of the treacherous Sir Mordred. The human tragedy of The Death of King Arthur so impressed Malory that he built his own Arthurian legend on this view of the court - a view that profoundly influenced the English conception of the 'great' King.

LibraryThing member LucyB.
Penguin Classics books are always a hit with me. Every time I decide to pick up one of these books, I come out completely satisfied. It was no different with this last purchase.

Sitting quaint in my favourite used book store, this tiny book ( at only $1.99) was just waiting for the right person to pick it up and give it a chance. I’m so glad I did!

The Death of King Arthur, is the famous king's tale written by an unknown author - ‘but most probably a Frenchman from Champagne, writing around 1230-35.’ This in itself got me so curious, that I just had to read it- if not for the story but at least for the flavor of reading something so old. I love the feeling of period writing because it really sets the mood for the piece. This one did not disappoint.

In The Death Of King Arthur, we read about all the great knights: Lancelot, Sir Gawain, Hector, Mador… Not only do we get the exciting battles fought for principle and reputation, there is so much gallantry, respect, honor and chivalry that make this book a precious piece of literature. Arthur’s beautiful Queen is at the center of this story, causing much dilemma between both Arthur and Lancelot.

The book is straightforward and although there are no flowery parts or picturesque moments or scenes, in its purity, this story does not need embellishing. What a refreshing read! Seemingly told by the author, as though he were narrating, I came to accept abrupt changes in the story that simply went like this: For example,

‘And now the story stops telling of Bors and his company, and returns to Lancelot…’

As strange and cut-off as this may seem, something that would never work in today’s writing, but considering the source and the time, it still works perfectly in this novel.

All I can say is that I really enjoyed reading this amazing tale, although simplistic in its form and told in such a straightforward manner, The Death of King Arthur managed to capture my interest and my heart. It made me remember why it is that I love Penguin Classics so much. Simply beautiful.… (more)
1 more
LibraryThing member DinadansFriend
We have a very realistic version of the end of Arthur's life here. No wondrous magical or religious episodes distort this account. Is this the origin of the detail of throwing Excaliber back into the lake? I think this 1230's redaction could be it. I've read it three times, over the years.
Fewer

Arthurian Romances by Chretien de Troyes
Parzival by Wolfram von Eschenbach
Lancelot of the Lake by Corin Corley
The Romance of Tristan, and The Tale of Tristan's Madness by Beroul
The Mabinogion by Anonymous
32 more
Le Morte d'Arthur 2 by Thomas Malory
Arthurian Chronicles by Eugene Mason
The History of the Kings of Britain by Geoffrey of Monmouth
Le Morte d'Arthur 1 by Thomas Malory
Tristan: With the Surviving Fragments of the 'Tristan of Thomas' by Gottfried von Strassburg
The Nibelungenlied: Prose Translation by Anonymous
The Song of Roland by Anonymous
Troilus and Criseyde by Geoffrey Chaucer
The Lais of Marie de France by Marie de France
The Voyage of Argo: The Argonautica by Apollonius of Rhodes
The Romance of the Rose by Guillaume de Lorris
King Harald's Saga: Harald Hardradi of Norway: From Snorri Sturluson's Heimskringla by Snorri Sturluson
A History of the English Church and People by Bede Venerablis
Sir Gawain and the Green Knight by Anonymous
The Development of Arthurian Romance by Roger Sherman Loomis
King Arthur's Death: Morte Arthure. Le Morte Arthur by Brian Stone
The Journey Through Wales and The Description of Wales by Gerald of Wales
The Saga of the Volsungs by Anonymous
The Vinland Sagas: The Norse Discovery of America by Anonymous
A Celtic Miscellany: Translations from the Celtic Literature by Kenneth Hurlstone Jackson
Njal's Saga by Magnus Magnusson
Piers the Ploughman by William Langland
Laxdaela Saga by Anonymous
The Poem of the Cid by Rita Hamilton
The Earliest English Poems by Michael Alexander
Chronicles of the Crusades by Jean de Joinville
The Owl and the Nightingale. Cleannes. St Erkenwald by Anonymous
The Bacchae and Other Plays by Euripides
Egil's Saga by Anonymous
Early Irish Myths and Sagas by Jeffrey Gantz
The Book of the Courtier by Baldesar Castiglione
A History of the Franks by Gregory of Tours
Fewer