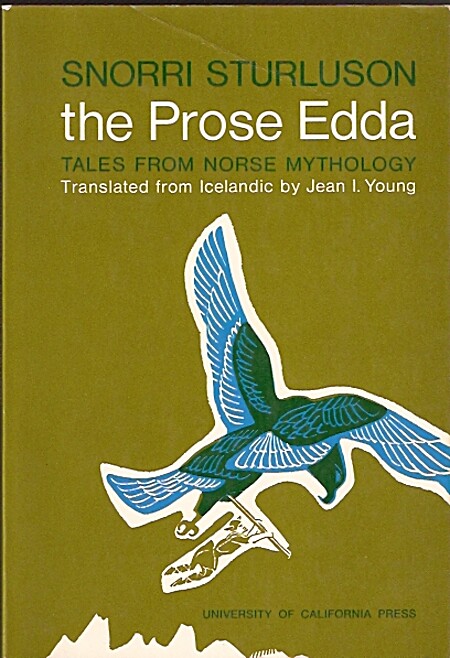 The Prose Edda is the most renowned of all works of Scandinavian literature and our most extensive source for Norse mythology. Written in Iceland, a century after the close of the Viking Age, it tells ancient stories of the Norse creation epic and recounts the battles that follow as gods, giants, dwarves and elves struggle for survival. It also preserves the oral memory of heroes, warrior kings and queens. In clear prose interspersed with powerful verse, the Eddaprovides unparalleled insight into the gods' tragic realization that the future holds one final cataclysmic battle, Ragnarok, when the world will be destroyed. These tales from the pagan era have proved to be among the most influential of all myths and legends, inspiring modern works as diverse as Wagner's Ring Cycleand Tolkien's The Lord of the Rings. This new translation by Jesse Byock captures the strength and subtlety of the original, while his introduction sets the tales fully in the context of Norse mythology. This edition includes detailed notes and appendices.… (more)

LibraryThing member fundevogel
The Edda is essentially a 13th century crash course in Norse mythology. At the time it was written Iceland was already Christian and the book's author penned an unintentionally humorous disclaimer in the prologue making sure everyone knew that he didn't believe any of this, that he was sophisticated enough to know the truth of Christianity, and he was just concerned about preserving these quaint beliefs for the their cultural and literary value. His sincerity made me giggle a little. I don't know, maybe the disclaimer was necessary back then, it's just so bizarre in a modern context.

Any who the intent of the book seems to be some what instructional. It collects various stories of godly hijinks, heroes and the monsters they face as well as shorter bits explaining little details of the world according to Norse mythology and the proper way to name things according to the traditions of skaldic poetry. That's why I call it instructional. Most of early Nordic literature is poetic and has very specific rules and symbolism. It can be tricky to understand the kennings and stories without a fair amount of background information so the Prose Edda is essentially intended to give people the background they need to understand and appreciate the literary tradition of skaldic poetry.

That said it doesn't really matter if you're reading the Edda with the intent to dig into skaldic poetry or not. The Prose Edda is the primary source of Norse mythology available to us today and Norse mythology is crazy. Like other mythological systems the purpose is to explain the world and give the history of the gods, but the Norse take just seems a little crazier and bloodier. I can't really go into the actual mythology without either going on way too long or short changing the stories, but suffice it to say that at one point Loki ties his testicles to a goat and engages in a tug of war with said goat.

On a side note, reading Norse mythology totally put me in the mood to revisit my neglected metal collection. Norse mythology is pretty metal.… (more)
7 more
LibraryThing member Michael.Rimmer
I was initially surprised that I knew all of the stories in The Prose Edda, but then I realised that I've been reading adaptations of them since I was aged 10, so not all that surprising really.

It was good to read the stories in their original(English translated) versions. They were very approachable and immediate: I felt as I was reading them that they were being spoken to me directly. Possibly this was because I'm English and they form part of a tradition of story-telling that is part of my cultural heritage. I think I'll read the Popol Vuh next and see how that compares.… (more)
LibraryThing member lidaskoteina
prior to reading notes in this vol I hadn't realized that some of the "mythical" material reflects actual people/events with independent attestations (Atli=Attila etc)
utterly fascinating
LibraryThing member laeviss
A must-read for anyone interested in Asatru or Heathenry.
LibraryThing member krisiti
The Prose Edda: Norse Mythology (Penguin Classics) (Penguin Classics) by Snorri Sturluson (2006)
LibraryThing member paperloverevolution
I've been told that most editions of The Edda of Snorri Sturluson (say it out loud, you'll love it) do not contain the 'Skaldskaparmal'. I thought this was the best part, and recommend that you find a copy with it included. It's basically a glossary of poetic terms and forms, breaking down the formal riddle-language into easily comprehensible parts. If you've ever found yourself overwhelmed by the kennings in an Icelandic epic (and who hasn't?), this book will straighten you right out.

Seriously, amazingly helpful for any study of the northern myths and epics. Very readable, as well.… (more)
LibraryThing member JVioland
Norse sagas written in Iceland around 1210 by Snorri Sturluson (I couldn't possibly have made up that name!). It records histories and traditions of the Norse people. Some material is gruesome, but then we're dealing with a people who hoped to die in battle!
LibraryThing member isabelx
Then Gangleri asked: 'Why is there such a difference between hot summer and cool winter?'
High One said: 'A well-informed man would not ask this. Everyone knows why. However, if you are the only person so ill-informed as never to have heard, I'll admit that it is better for you to ask once in your foolishness than to go on any longer in ignorance of what you ought to know.

A translation of the narrative sections of The Prose Edda, which contain various stories about the Norse gods and heroes. In "The Deluding of Gylfi", the Swedish King Gylfi (disguised as a traveller called Gangleri) talks with three beings calling themselves High, Just-as-High and Third, all three of which names are included in the list of Odin's names given by him to King Geirrod. In the second part "Selections from Poetic Diction", a man called Aegir visits the Aesir in Asgard. During dinner he sits with Bragi the god of poetry, who tells him stories about the doings of the gods.… (more)
Fewer

- The Elder Edda: A Book of Viking Lore by Anonymous
Njal's Saga by Magnus Magnusson
The Saga of the Volsungs by Anonymous
Egil's Saga by Anonymous
Gods and Myths of Northern Europe by H. R. Ellis Davidson
17 more
Hrafnkel's Saga and Other Icelandic Stories by Anonymous
Orkneyinga Saga: The History of the Earls of Orkney by Anonymous
The Nibelungenlied: Prose Translation by Anonymous
Eyrbyggja Saga by Anonymous
Seven Viking Romances by Hermann Palsson
The Kalevala: An Epic Poem after Oral Tradition by Elias Lönnrot
The Mabinogion by Anonymous
The Saga of King Hrolf Kraki by Anonymous
Grettir's Saga by Jesse Byock
The Tain: From the Irish Epic "Tain Bo Cuailnge" by Louis le Brocquy
Early Irish Myths and Sagas by Jeffrey Gantz
Laxdaela Saga by Anonymous
Eirik the Red and Other Icelandic Sagas by Gwyn Jones
Tristan: With the Surviving Fragments of the 'Tristan of Thomas' by Gottfried von Strassburg
King Harald's Saga: Harald Hardradi of Norway: From Snorri Sturluson's Heimskringla by Snorri Sturluson
The Earliest English Poems by Michael Alexander
The Journey Through Wales and The Description of Wales by Gerald of Wales
Fewer