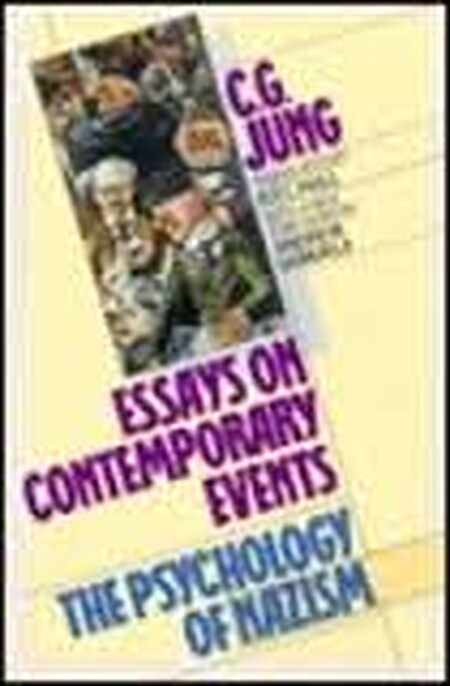 Essays on contemporary events : the psychology of Nazism

A discussion of the psychological and philosophical implications of events in Germany during and immediately following the Nazi period. The essays--"The Fight with the Shadow," "Wotan," "Psychotherapy Today," "Psychotherapy and a Philosophy of Life," "After the Catastrophe," and an Epilogue--are extracted from Volumes 10 and 16.

The Princeton Legacy Library uses the latest print-on-demand technology to again make available previously out-of-print books from the distinguished backlist of Princeton University Press. These editions preserve the original texts of these important books while presenting them in durable paperback and hardcover editions. The goal of the Princeton Legacy Library is to vastly increase access to the rich scholarly heritage found in the thousands of books published by Princeton University Press since its founding in 1905.

Striving Toward Wholeness by Barbara Hannah
The Collected Works of C.G. Jung, Volume 15: The spirit in man, art, and literature by Carl Gustav Jung
Complex/archetype/symbol in the psychology of C. G. Jung by Jolande Székács Jacobi
The plural psyche : personality, morality, and the father by Andrew Samuels
The child: structure and dynamics of the nascent personality by Erich Neumann
29 more
The psychology of C.G. Jung : an introduction with illustrations by Jolande Jacobi
The longing for paradise : psychological perspectives on an archetype by Mario Jacoby
Jungian analysis by Murray Stein
Anima as fate by Cornelia Brunner
C.G. Jung : his myth in our time by Marie-Luise Von Franz
Essays on a science of mythology : the myth of the divine child and the mysteries of Eleusis by C. G. Jung
Analytical psychology : notes of the seminar given in 1925 by C. G. Jung
Ego and archetype; individuation and the religious function of the psyche by Edward F. Edinger
Jung and the post-Jungians by Andrew Samuels
Psychology and alchemy by C. G. Jung
C.G. Jung and Paul Tillich : the psyche as sacrament by John P. Dourley
The problem of the puer aeternus by Marie-Luis Von Franz
The scapegoat complex : toward a mythology of shadow and guilt by Sylvia Brinton Perera
Animus and anima by Emma Jung
Collected Works of C.G. Jung, Volume 11: Answer to Job by C. G. Jung
When the spirits come back by Janet Dallett
The mystery of the coniunctio : alchemical image of individuation : lectures by Edward F. Edinger
The inner world of man by Frances G Wickes
The I and the not-I : a study in the development of consciousness by M. Esther Harding
The origins and history of consciousness by Erich Neumann
Analytical psychology : its theory and practice ; the Tavistock lectures by C. G. Jung
C.G. Jung, Psychological reflections : a new anthology of his writings, 1905-1961 by C. G. Jung
Hags and heroes : a feminist approach to Jungian psychotherapy with couples by Polly Young-Eisendrath
The Parental image : its injury and reconstruction : a study in analytical psychology by M. Esther Harding
Methods in analytical psychology : an introduction by Hans Dieckmann
C. G. Jung speaking : interviews and encounters by William McGuire
Living symbol : a case study of the process of individuation by Gerhard Adler
The creation of consciousness : Jung's myth for modern man by Edward F. Edinger
The dream and the underworld by James Hillman
Fewer