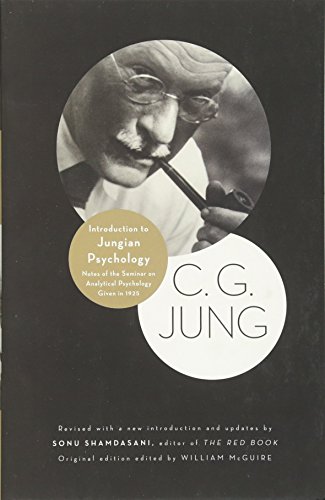 Introduction to Jungian psychology : notes of the seminar on analytical psychology given in 1925

In 1925, while transcribing and painting in his Red Book, C. G. Jung presented a series of seminars in English in which he spoke for the first time in public about his early spiritualistic experiences, his encounter with Freud, the genesis of his psychology, and the self-experimentation he called his "confrontation with the unconscious," describing in detail a number of pivotal dreams and fantasies. He then presented an introductory overview of his ideas about psychological typology and the archetypes of the collective unconscious, illustrated with case material and discussions concerning contemporary art. He focused particularly on the contra-sexual elements of the personality, the anima and the animus, which he discussed with the participants through psychological analyses of popular novels, such as Rider Haggard's She. The notes from these seminars form the only reliable published autobiographical account by Jung and the clearest and most important account of the development of his work.

This revised edition features additional annotations, information from the Red Book, and an introduction by Sonu Shamdasani, Philemon Professor of Jung History at University College London.

Pathways into the Jungian world : phenomenology and analytical psychology by Roger Brooke
Complex/archetype/symbol in the psychology of C. G. Jung by Jolande Székács Jacobi
Jung and the making of modern psychology : the dream of a science by Sonu Shamdasani
Archetypal dimensions of the psyche by Marie-Luise Von Franz
The plural psyche : personality, morality, and the father by Andrew Samuels
32 more
The psychology of C.G. Jung : an introduction with illustrations by Jolande Jacobi
Animus and anima by Emma Jung
The creation of consciousness : Jung's myth for modern man by Edward F. Edinger
The scapegoat complex : toward a mythology of shadow and guilt by Sylvia Brinton Perera
Projection and re-collection in Jungian psychology : reflections of the soul by Marie-Luise Von Franz
The symbolic quest : basic concepts of analytical psychology by Edward C. Whitmont
The wounded healer : countertransference from a Jungian perspective by David Sedgwick
The longing for paradise : psychological perspectives on an archetype by Mario Jacoby
The problem of the puer aeternus by Marie-Luis Von Franz
Jung and the alchemical imagination by Jeffrey Raff
Essays on contemporary events : the psychology of Nazism by C. G. Jung
The Mysterium lectures : a journey through C.G. Jung's Mysterium coniunctionis by Edward F. Edinger
Jung and the post-Jungians by Andrew Samuels
The religious function of the psyche by Lionel Corbett
Art and the creative unconscious : four essays by Erich Neumann
Archetypal patterns in fairy tales by Marie-Luise von Franz
Jung on Christianity by C. G. Jung
The Collected Works of C.J. Jung, Volume 7: Two essays on analytical psychology by C. G. Jung
The Cambridge companion to Jung by Polly Young-Eisendrath
The child: structure and dynamics of the nascent personality by Erich Neumann
Archetypal psychology : a brief account : together with a complete checklist of works by James Hillman
Experiment in depth : a study of the work of Jung, Eliot and Toynbee by P. W. Martin
Puer papers by James Hillman
Anima : an anatomy of a personified notion by James Hillman
Jung's typology by Marie-Luise Von Franz
The gnostic Jung and the Seven Sermons to the dead by Stephan A. Hoeller
Ego and archetype; individuation and the religious function of the psyche by Edward F. Edinger
Cult fictions : C.G. Jung and the founding of analytical psychology by Sonu Shamdasani
The spiral way : a woman's healing journey by Aldo Carotenuto
Understanding dreams by Mary Ann Mattoon
Jung by Anthony Storr
The I and the not-I : a study in the development of consciousness by M. Esther Harding
Fewer