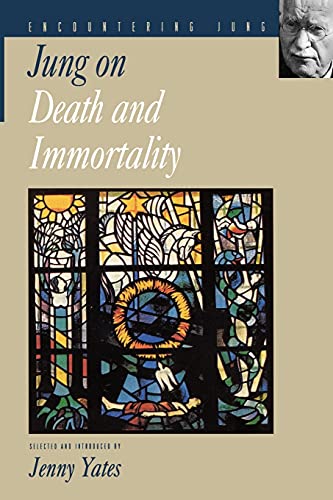 Jung on death and immortality

"As a doctor, I make every effort to strengthen the belief in immortality, especially with older patients when such questions come threateningly close. For, seen in correct psychological perspective, death is not an end but a goal, and life's inclination towards death begins as soon as the meridian is past."--C.G. Jung, commentary on The Secret of the Golden Flower?

Here collected for the first time are Jung's views on death and immortality, his writings often coinciding with the death of the most significant people in his life. The book shows many of the major themes running throughout the writings, including the relativity of space and time surrounding death, the link between transference and death, and the archetypes shared among the world's religions at the depths of the Self. The book includes selections from "On Resurrection," "The Soul and Death," "Concerning Rebirth," "Psychological Commentary on The Tibetan Book of the Dead" from the Collected Works, "Letter to Pastor Pfafflin" from Letters, and "On Life after Death."

Mysterium coniunctionis : an inquiry into the separation and synthesis of psychic opposites in alchemy by C. G. Jung
On Dreams and Death by Marie-Louise Von Franz
Ego and archetype; individuation and the religious function of the psyche by Edward F. Edinger
Jung on alchemy by C. G. Jung
The Collected Works of C.G. Jung, Volumes 4,12,16: Dreams by C. G. Jung
35 more
The new God-image : a study of Jung's key letters concerning the evolution of the western God-image by Edward F. Edinger
Jung's treatment of Christianity : the psychotherapy of a religious tradition by Murray Stein
Ariadne's clue : a guide to the symbols of humankind by Anthony Stevens
The Mysterium lectures : a journey through C.G. Jung's Mysterium coniunctionis by Edward F. Edinger
Jung on active imagination by C. G. Jung
Encountering Jung on mythology by C. G. Jung
Seeing through the visible world : Jung, gnosis, and chaos by June Singer
The Collected Works of C.J. Jung, Volume 7: Two essays on analytical psychology by C. G. Jung
The Collected Works of C.G. Jung, Volume 15: The spirit in man, art, and literature by Carl Gustav Jung
Anatomy of the psyche : alchemical symbolism in psychotherapy by Edward F. Edinger
Healing fiction by James Hillman
Jung and the alchemical imagination by Jeffrey Raff
On synchronicity and the paranormal by C. G. Jung
Essays on a science of mythology : the myth of the divine child and the mysteries of Eleusis by C. G. Jung
Alchemical active imagination by Marie-Luise Von Franz
The religious function of the psyche by Lionel Corbett
Amor and Psyche : the psychic development of the feminine : a commentary on the tale by Apuleius by Apuleius.,
Encounters with the soul : active imagination as developed by C. G. Jung by Barbara Hannah
The psychology of C.G. Jung : an introduction with illustrations by Jolande Jacobi
The problem of the puer aeternus by Marie-Luis Von Franz
Psychology and Religion Based on the Tery Lectures by C. G. Jung
Archetypal dimensions of the psyche by Marie-Luise Von Franz
The symbolic quest : basic concepts of analytical psychology by Edward C. Whitmont
Collected Works of C.G. Jung, Volume 11: Answer to Job by C. G. Jung
Jung and the making of modern psychology : the dream of a science by Sonu Shamdasani
Myth of Analysis: Three Essays in Archetypal Psychology by James Hillman
Animus and anima by Emma Jung
Archetypal psychology : a brief account : together with a complete checklist of works by James Hillman
The dream and the underworld by James Hillman
Psychology and alchemy by C. G. Jung
Inter views : conversations with Laura Pozzo on psychotherapy, biography, love, soul, dreams, work, imagination, and the state of the culture by James Hillman
Suicide and the soul by James Hillman
Oedipus variations : studies in literature and psychoanalysis by Karl Kerényi
Psyche and symbol : a selection from the writings of C.G. Jung by C. G. Jung
Shadow and evil in fairy tales by Marie-Luise Von Franz
Fewer