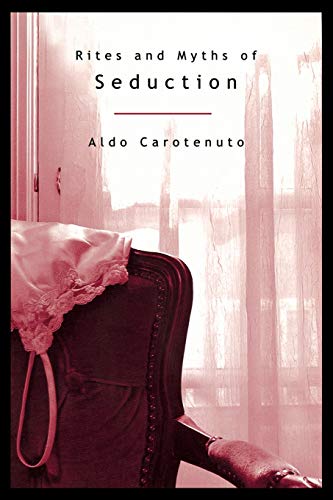 Rites and myths of seduction

“Every seduction is a promise, a half-opened door into the unfamiliar, momentarily glimpsed, world of splendor—an expectation not only attenuated by desire and waiting, but intensified.”

Since Biblical times, the act of seduction has been a constant in our history showing the way to discovery, creation, and love, but also to perdition. Seduction can be defined as "carrying elsewhere," the sweeping of the subject beyond usual experience. Jungian analyst Aldo Carotenuto examines the unconscious motivations at play in seduction in infancy, in the couple relationship, and in the analytical relationship.

Seduction includes a secret invitation to embrace transformation, an openness to change despite risks and suffering. The many facets of seduction are illuminated through a lively discussion of Satan, figures from Greek mythology, star-crossed lovers such as Paolo and Francesca, and the master of seduction, Don Juan.

In the analytical relationship, the patient must maintain equilibrium between fear and attraction; the analyst must realize that the analytical process animates fantasies of seduction. In a fable told by a patient, an analyst, and a narrator, the secret meaning of an encounter are revealed. This book fosters a clear understanding of the affective roots of seduction that can lead to transformation and the discovery of a new identity.

Aldo Carotenuto, psychoanalyst and prominent international exponent of Jungian thought, is a member of the American Psychological Association, President of the Associazione di Psicologia e Letteratura, and Professor of Psychology of the Personality at the University of Rome. He is the author of more than twenty works, including books on the art of psychotherapy, individuation, transformation, healing, and other Jungian themes.

The Collected Works of C.J. Jung, Volume 7: Two essays on analytical psychology by C. G. Jung
Psyche and symbol : a selection from the writings of C.G. Jung by C. G. Jung
Owning your own shadow : understanding the dark side of the psyche by Robert A. Johnson
Mysterium coniunctionis : an inquiry into the separation and synthesis of psychic opposites in alchemy by C. G. Jung
Psychology and alchemy by C. G. Jung
25 more
C.G. Jung, Psychological reflections : a new anthology of his writings, 1905-1961 by C. G. Jung
Eros and pathos : shades of love and suffering by Aldo Carotenuto
Ego and archetype; individuation and the religious function of the psyche by Edward F. Edinger
Animus and anima by Emma Jung
The basic writings of C.G. Jung by C. G. Jung
The psychology of C.G. Jung : an introduction with illustrations by Jolande Jacobi
She : understanding feminine psychology : an interpretation based on the myth of Amor and Psyche and using Jungian psychological concepts by Robert A. Johnson
The essential Jung by C. G. Jung
Archetypal psychology : a brief account : together with a complete checklist of works by James Hillman
Senex & puer by James Hillman
The dream and the underworld by James Hillman
Synchronicity : an acausal connecting principle by Carl Gustav Jung
The collected Works of C.G. Jung, Volume 9, Part I: The archetypes and the collective unconscious by C.G. Jung
To love, to betray : life as betrayal by Aldo Carotenuto
Jung by Anthony Storr
The wisdom of the dream: the world of C. G. Jung by Stephen Segaller
The sacred prostitute : eternal aspect of the feminine by Nancy Qualls-Corbett
Healing fiction by James Hillman
Complex/archetype/symbol in the psychology of C. G. Jung by Jolande Székács Jacobi
A secret symmetry : Sabina Spielrein between Jung and Freud by Aldo Carotenuto
Not the big sleep : on having fun, seriously : a Jungian romance by Daryl Sharp
The fear of the feminine and other essays on feminine psychology by Erich Neumann
The symbolic quest : basic concepts of analytical psychology by Edward C. Whitmont
Meeting the shadow : the hidden power of the dark side of human nature by Jeremiah Abrams
The undiscovered self by Carl Gustav Jung
Fewer