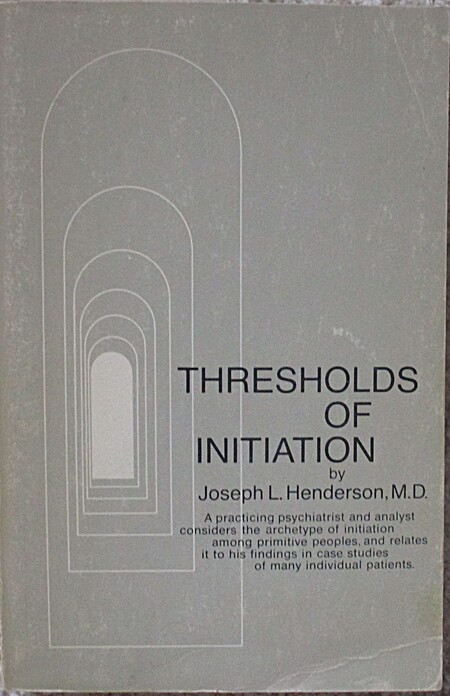 Basing his study on Jung’s archetypal theory—especially that of initiation—Thresholds of Initiation represents thirty years of testing the theory in analytical practice. Joseph Henderson considers archetypes to be predictable patterns of inner conditioning that lead to certain essential changes and shows the parallels between individual psychological self-development and the rites that marked initiation in the past.

Dr. Henderson’s topics include the uninitiated; return of the mother; remaking a man; trial by strength; the rite of vision; thresholds of initiation; initiation and the principle of ego-development in adolescence; and initiation in the process of individuation.

This is essential reading for an understanding of the universal nature of initiation, especially as it relates traditional initiatory practices to Jung’s theory of archetypes.

“In Dr. Henderson’s view, ‘initiation’ is a term properly applied to the process by which a youth graduates from childhood to manhood, but it also means the transition from socially acceptable manhood to the maturity of “individuation.”... Following Jung’s lead, he has discerned in the lore of Greek myth and the practices of tribal societies a general scheme of successive initiations.” —Manas

“Henderson’s careful, scholarly approach is displayed to good effect in this wide-ranging volume, which bears the stamp of his authority and contains the support of long experience. He develops the provocative theory that there is an archetype of initiation and has assembled comparative material brought into relation with dreams from patients to expound its implications.” —Journal of Analytical Psychology

The Collected Works of C.J. Jung, Volume 7: Two essays on analytical psychology by C. G. Jung
Analytical psychology : its theory and practice ; the Tavistock lectures by C. G. Jung
Mysterium coniunctionis : an inquiry into the separation and synthesis of psychic opposites in alchemy by C. G. Jung
The wisdom of the dream: the world of C. G. Jung by Stephen Segaller
Psychology and alchemy by C. G. Jung
33 more
Projection and re-collection in Jungian psychology : reflections of the soul by Marie-Luise Von Franz
Ego and archetype; individuation and the religious function of the psyche by Edward F. Edinger
A Primer of Jungian Psychology by Calvin S. Hall
The I and the not-I : a study in the development of consciousness by M. Esther Harding
Methods in analytical psychology : an introduction by Hans Dieckmann
Synchronicity : an acausal connecting principle by Carl Gustav Jung
Essays on a science of mythology : the myth of the divine child and the mysteries of Eleusis by C. G. Jung
The Collected Works of C.G. Jung, Volumes 4,12,16: Dreams by C. G. Jung
Psychotherapy grounded in the feminine principle by Barbara Stevens Sullivan
Jung by Anthony Stevens
The basic writings of C.G. Jung by C. G. Jung
The essential Jung by C. G. Jung
Complex/archetype/symbol in the psychology of C. G. Jung by Jolande Székács Jacobi
Jungian analysis by Murray Stein
The collected Works of C.G. Jung, Volume 9, Part I: The archetypes and the collective unconscious by C.G. Jung
Collected Works of C.G. Jung, Volume 11: Answer to Job by C. G. Jung
Animus and anima by Emma Jung
The wounded healer : countertransference from a Jungian perspective by David Sedgwick
Meeting the shadow : the hidden power of the dark side of human nature by Jeremiah Abrams
On Dreams and Death by Marie-Louise Von Franz
The undiscovered self by Carl Gustav Jung
Seeing through the visible world : Jung, gnosis, and chaos by June Singer
Jung : a biography by Deirdre Bair
Encountering Jung on mythology by C. G. Jung
Owning your own shadow : understanding the dark side of the psyche by Robert A. Johnson
The Tao of psychology : synchronicity and the self by Jean Shinoda Bolen
Jung and the making of modern psychology : the dream of a science by Sonu Shamdasani
The Mysterium lectures : a journey through C.G. Jung's Mysterium coniunctionis by Edward F. Edinger
The passion of Perpetua by Marie-Luise von Franz
Psyche at work by Murray Stein
The origins and history of consciousness by Erich Neumann
The psychology of Kundalini yoga : notes of the seminar given in 1932 by C.G. Jung by C. G. Jung
Striving Toward Wholeness by Barbara Hannah
Fewer