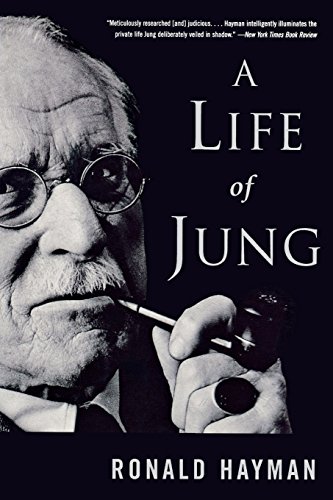 A life of Jung

Carl Jung was one of the world's most influential psychoanalysts. With the exception of Freud, who chose him as the first president of the International Psychoanalytic Association, no psychologist has achieved more. Previous biographers have either made Jung an idol or condemned him for his failings. Ronald Hayman neither ignores Jung's faults nor exaggerates them in investigating the most crucial paradoxes surrounding this enigmatic figure. Hailed by Anthony Storr as "the best biography of Jung," Hayman's work is "all the more effective for its detached tone that perfectly puts in proportion Jung's cruel, brilliant and crazy schemes" (The Times [London]). Impeccably researched and written with notable objectivity, A Life of Jung offers a rare insight into how Jung's revolutionary ideas grew out of his own extraordinary experiences. "Compelling....Hayman captures...the extraordinary charisma of his subject."―Newsday "Likely to become the standard biography of the revolutionary psychoanalyst."―Kirkus Reviews, starred review 16 pages of illustrations

Jung : a biography by Deirdre Bair
The Cambridge companion to Jung by Polly Young-Eisendrath
Mysterium coniunctionis : an inquiry into the separation and synthesis of psychic opposites in alchemy by C. G. Jung
A most dangerous method : the story of Jung, Freud, and Sabina Spielrein by John Kerr
C.G. Jung : his myth in our time by Marie-Luise Von Franz
21 more
Jung by Anthony Stevens
The Collected Works of C.J. Jung, Volume 7: Two essays on analytical psychology by C. G. Jung
The essential Jung by C. G. Jung
Ego and archetype; individuation and the religious function of the psyche by Edward F. Edinger
The Collected Works of C.G. Jung, Volumes 4,12,16: Dreams by C. G. Jung
C. G. Jung speaking : interviews and encounters by William McGuire
Analytical psychology : its theory and practice ; the Tavistock lectures by C. G. Jung
The Collected Works of C.G. Jung, Volume 15: The spirit in man, art, and literature by Carl Gustav Jung
Psyche and symbol : a selection from the writings of C.G. Jung by C. G. Jung
A Primer of Jungian Psychology by Calvin S. Hall
Atom and archetype : the Pauli/Jung letters, 1932-1958 by Wolfgang Pauli
Psychology of the unconscious : a study of the transformations and symbolisms of the libido : a contribution to the history of the evolution of thought by C. G. Jung
The basic writings of C.G. Jung by C. G. Jung
Jung by Anthony Storr
The psychology of C.G. Jung : an introduction with illustrations by Jolande Jacobi
Archetypes & strange attractors : the chaotic world of symbols by John R. Van Eenwyk
Complex/archetype/symbol in the psychology of C. G. Jung by Jolande Székács Jacobi
Jung, his life and work : a biographical memoir by Barbara Hannah
The inner world of trauma : archetypal defenses of the personal spirit by Donald Kalsched
An introduction to Jung's psychology by Frieda Fordham
The wisdom of the dream: the world of C. G. Jung by Stephen Segaller
Fewer