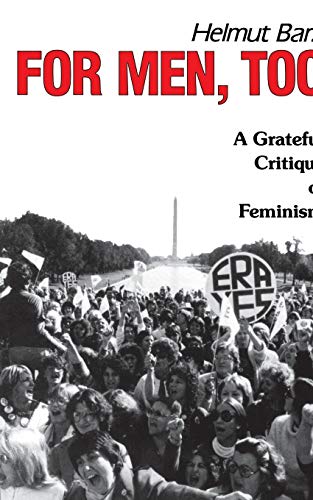 For men, too : a grateful critique of feminism

“The strongest impulse leading me to write this book is my conviction that the women’s movement is, or should be, just as much a matter for men as for women. I want to react, to respond as one male human, to the discovery—described for the most part by women—that the history of humanity over the past several thousand years has also been a history of the oppression of women by men.

From the viewpoint of many feminist authors—among whom I include myself, although with some hesitation—all men are oppressors and exploiters of women, not necessarily because they want to be, but because both men and women have become so used to the collective pattern of the oppressive man and the oppressed woman that they have to follow this schema even against their will. I would have a bad conscience if I did not attempt to voice this conviction. To do this, though, I have to risk such daring undertaking as to say what I understand women to be, and men to be…..” -Helmut Barz

Daughters, Sons, Mothers, Fathers: Humanity and the Image of God

Feminism and Jungian Psychology: Toward a Productive Synthesis

The sacred prostitute : eternal aspect of the feminine by Nancy Qualls-Corbett
C.G. Jung : the fundamentals of theory and practice by Elie G. Humbert
The interpretation of fairy tales by Marie-Luise Von Franz
The fisher king and the handless maiden : understanding the wounded feeling function in masculine and feminine psychology by Robert A. Johnson
Understanding dreams by Mary Ann Mattoon
36 more
Jung's treatment of Christianity : the psychotherapy of a religious tradition by Murray Stein
Animus and anima by Emma Jung
Hags and heroes : a feminist approach to Jungian psychotherapy with couples by Polly Young-Eisendrath
The ravaged bridegroom : masculinity in women by Marion Woodman
The grail legend by Emma Jung
Addiction to perfection : the still unravished bride : a psychological study by Marion Woodman
Psyche's stories : modern Jungian interpretations of fairy tales by Murray Stein
Translate this darkness : the life of Christiana Morgan, the veiled woman in Jung's circle by Claire Douglas
Amor and Psyche : the psychic development of the feminine : a commentary on the tale by Apuleius by Apuleius.,
Shadow and evil in fairy tales by Marie-Luise Von Franz
Goddesses in older women : archetypes in women over fifty by Jean Shinoda Bolen
Sandplay studies : origins, theory, and practice by Kay Bradway
Women who run with the wolves : myths and stories of the wild woman archetype by Clarissa Pinkola Estés
Lying with the heavenly woman : understanding and integrating the feminine archetypes in men's lives by Robert A. Johnson
Individuation in fairy tales by Marie-Luise Von Franz
Methods in analytical psychology : an introduction by Hans Dieckmann
Personal mythology : the psychology of your evolving self : using ritual, dreams, and imagination to discover your inner story by David Feinstein
Images of the self : the sandplay therapy process by Estelle L. Weinrib
Alcoholism and women : the background and the psychology by Jan Bauer
We've had a hundred years of psychotherapy-- and the world's getting worse by James Hillman
Psyche and family : Jungian applications to family therapy by Laura Sue Dodson
Knowing woman: a feminine psychology by Irene Claremont de Castillejo
Transformation : understanding the three levels of masculine consciousness by Robert A. Johnson
Archetypal patterns in fairy tales by Marie-Luise von Franz
Change of life : a psychological study of dreams and the menopause by Ann Mankowitz
Evil : the shadow side of reality by John A. Sanford
The scapegoat complex : toward a mythology of shadow and guilt by Sylvia Brinton Perera
The pregnant virgin : a process of psychological transformation by Marion Woodman
People who do things to each other : essays in analytical psychology by Judith Hubback
Liberating the heart : spirituality and Jungian psychology by Lawrence W. Jaffe
The symbolic quest : basic concepts of analytical psychology by Edward C. Whitmont
Archetypal medicine by Alfred J. Ziegler
Descent to the Goddess : a way of initiation for women by Sylvia Brinton Perera
Receiving woman : studies in the psychology and theology of the feminine by Ann Belford Ulanov
The Christian archetype : a Jungian commentary on the life of Christ by Edward F. Edinger
The psychological meaning of redemption motifs in fairytales by Marie-Luise Von Franz
Fewer