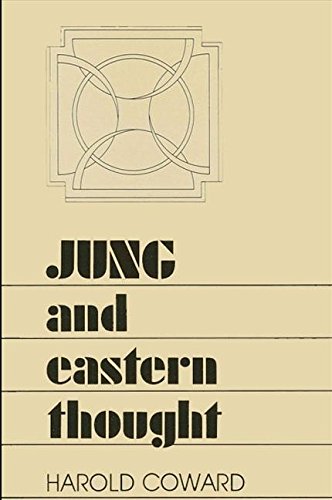 Jung and Eastern Thought is an assessment of the impact of the East on Jung’s life and teaching. Along with the strong and continuing interest in the psychology of Carl Jung is a growing awareness of the extent to which Eastern thought, especially Indian ideas, influenced his thinking. This book identifies those influences that he found useful and those he rejected.

In Hindu, Buddhist, and Taoist cultures, yoga is a central conception and practice. Jung was at once fascinated and critical of yoga. Part I of the book examines Jung’s encounter with yoga and his strong warning against the uncritical adoption of yoga by the modern West. In Part II Jung’s love/hate relationship with Eastern thought is examined in light of his attitude toward karma and rebirth, Kundalini yoga, mysticism, and Patanjali’s Yoga Sutras.

Coward’s observations are rounded out by contributions from J. Borelli and J. Jordens. Dr. Borelli’s Annotated Bibliography is an invaluable contribution to bibliographic material on Jung, yoga, and Eastern religion. A special feature is the Introduction by Joseph Henderson, Jung’s most senior North American student and one of the few Jungians to have recognized the important influence of the East on Jung’s thinking.

The Tao of psychology : synchronicity and the self by Jean Shinoda Bolen
The gnostic Jung and the Seven Sermons to the dead by Stephan A. Hoeller
The secret of the golden flower : a chinese book of life by Richard Wilhelm
Analytical psychology : its theory and practice ; the Tavistock lectures by C. G. Jung
Encounters with the soul : active imagination as developed by C. G. Jung by Barbara Hannah
28 more
The psychology of Kundalini yoga : notes of the seminar given in 1932 by C.G. Jung by C. G. Jung
Synchronicity : an acausal connecting principle by Carl Gustav Jung
A blue fire : selected writings by James Hillman
Jung and the post-Jungians by Andrew Samuels
Psyche and symbol : a selection from the writings of C.G. Jung by C. G. Jung
Ego and archetype; individuation and the religious function of the psyche by Edward F. Edinger
Jung and yoga : the psyche-body connection by Judith Parker Harris
Anatomy of the psyche : alchemical symbolism in psychotherapy by Edward F. Edinger
The unholy Bible: Blake, Jung and the collective unconscious by June Flaum Singer
Projection and re-collection in Jungian psychology : reflections of the soul by Marie-Luise Von Franz
Spirit and soul : essays in philosophical psychology by Edward S. Casey
The creation of consciousness : Jung's myth for modern man by Edward F. Edinger
Mysterium coniunctionis : an inquiry into the separation and synthesis of psychic opposites in alchemy by C. G. Jung
Re-visioning psychology by James Hillman
Transformation of the God-image : an elucidation of Jung's Answer to Job by Edward F. Edinger
Essays on a science of mythology : the myth of the divine child and the mysteries of Eleusis by C. G. Jung
The essential Jung by C. G. Jung
Seeing through the visible world : Jung, gnosis, and chaos by June Singer
Myth of Analysis: Three Essays in Archetypal Psychology by James Hillman
Beyond the brain : birth, death, and transcendence in psychotherapy by Stanislav Grof
Art and the creative unconscious : four essays by Erich Neumann
Inter views : conversations with Laura Pozzo on psychotherapy, biography, love, soul, dreams, work, imagination, and the state of the culture by James Hillman
The Aion lectures : exploring the self in C.G. Jung's Aion by Edward F. Edinger
Ecstasy : understanding the psychology of joy by Robert A. Johnson
The Collected Works of C.J. Jung, Volume 7: Two essays on analytical psychology by C. G. Jung
Archetypal psychology : a brief account : together with a complete checklist of works by James Hillman
The Christian archetype : a Jungian commentary on the life of Christ by Edward F. Edinger
The longing for paradise : psychological perspectives on an archetype by Mario Jacoby
Fewer