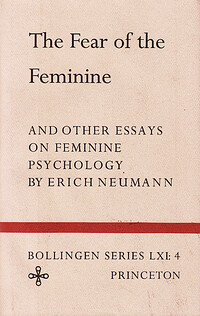 The fear of the feminine and other essays on feminine psychology

These essays by the famous analytical psychologist and student of creativity Erich Neumann belong in the context of the depth psychology of culture and reveal a prescient concern about the one-sidedness of patriarchal Western civilization. Neumann recommended a "cultural therapy" that he thought would redress a "fundamental ignorance" about feminine and masculine psychology, and he looked for societal healing to a "matriarchal consciousness" that forms the bridge between the feminine and the creative.

Brought together here for the first time, the essays in the book discuss the psychological stages of woman's development, the moon and matriarchal consciousness, Mozart's Magic Flute, the meaning of the earth archetype for modern times, and the fear of the feminine. In Mozart's fantastic world, Neumann saw a true Auseinandersetzung--the conflict and coming-to-terms with each other of the matriarchal and the patriarchal worlds. Developing such a synthesis of the feminine and the masculine in the psychic reality of the individual and of the collective was, he argued, one of the fundamental, future-oriented tasks of both the society and the individual.

The sacred prostitute : eternal aspect of the feminine by Nancy Qualls-Corbett
The ravaged bridegroom : masculinity in women by Marion Woodman
Amor and Psyche : the psychic development of the feminine : a commentary on the tale by Apuleius by Apuleius.,
She : understanding feminine psychology : an interpretation based on the myth of Amor and Psyche and using Jungian psychological concepts by Robert A. Johnson
The fisher king and the handless maiden : understanding the wounded feeling function in masculine and feminine psychology by Robert A. Johnson
37 more
The Mysterium lectures : a journey through C.G. Jung's Mysterium coniunctionis by Edward F. Edinger
The great mother : an analysis of the archetype by Erich Neumann
Complex/archetype/symbol in the psychology of C. G. Jung by Jolande Székács Jacobi
Aspects of the Feminine by C. G Jung
Aspects of the Masculine by C. G. Jung
The symbolic quest : basic concepts of analytical psychology by Edward C. Whitmont
Mysterium coniunctionis : an inquiry into the separation and synthesis of psychic opposites in alchemy by C. G. Jung
Animus aeternus : exploring the inner masculine by Deldon Anne McNeely
Boundaries of the Soul: The Practice of Jung's Psychology by June Singer
Puer papers by James Hillman
The psychology of C.G. Jung : an introduction with illustrations by Jolande Jacobi
Projection and re-collection in Jungian psychology : reflections of the soul by Marie-Louise von Franz
Lying with the heavenly woman : understanding and integrating the feminine archetypes in men's lives by Robert A. Johnson
The Collected Works of C.J. Jung, Volume 7: Two essays on analytical psychology by C. G. Jung
Addiction to perfection : the still unravished bride : a psychological study by Marion Woodman
Conscious femininity : interviews with Marion Woodman by Marion Woodman
Jung's Map of the Soul: An Introduction by Murray Stein
Eros on crutches : reflections on psychopathy and amorality by Adolf Guggenbühl-Craig
Psyche and Matter by Marie-Louise von Franz
Phallos : sacred image of the masculine by Eugene Monick
On the Nature of the Psyche by Carl Jung
Woman's mysteries, ancient and modern : a psychological interpretation of the feminine principle as portrayed in myth, story, and dreams by M. Esther Harding
Eros and pathos : shades of love and suffering by Aldo Carotenuto
Animus and anima by Emma Jung
The pregnant virgin : a process of psychological transformation by Marion Woodman
Archetypal psychology : a brief account : together with a complete checklist of works by James Hillman
Psychology and alchemy by C. G. Jung
C.G. Jung, Psychological reflections : a new anthology of his writings, 1905-1961 by C. G. Jung
The religious function of the psyche by Lionel Corbett
The problem of the puer aeternus by Marie-Louise von Franz
Synchronicity : an acausal connecting principle by Carl Gustav Jung
The Aion lectures : exploring the self in C.G. Jung's Aion by Edward F. Edinger
The inner journey : lectures and essays on Jungian psychology by Barbara Hannah
The collected works of C.G. Jung, Volume 9, Part II: Aion, Resesearches Into Th Phenomenology of the Self by C. G. Jung
He : understanding masculine psychology : Robert A. Johnson by Robert A. Johnson
The creation of consciousness : Jung's myth for modern man by Edward F. Edinger
Healing fiction by James Hillman
Fewer