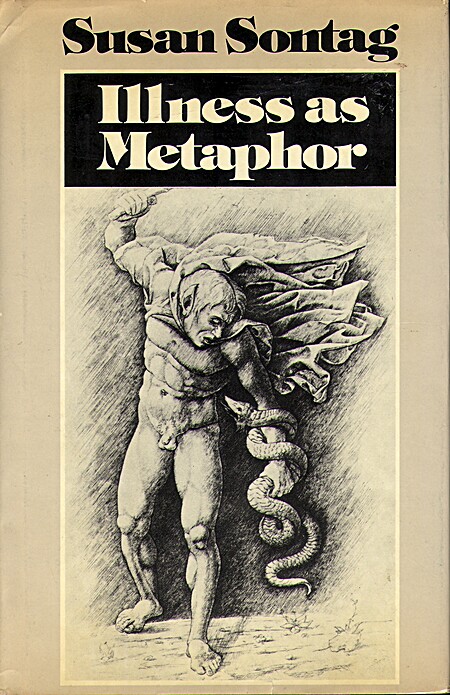 n 1978 Susan Sontag wrote Illness as Metaphor, a classic work described by Newsweek as "one of the most liberating books of its time." A cancer patient herself when she was writing the book, Sontag shows how the metaphors and myths surrounding certain illnesses, especially cancer, add greatly to the suffering of patients and often inhibit them from seeking proper treatment. By demystifying the fantasies surrounding cancer, Sontag shows cancer for what it is--just a disease. Cancer, she argues, is not a curse, not a punishment, certainly not an embarrassment and, it is highly curable, if good treatment is followed.

LibraryThing member paradoxosalpha
Illness as Metaphor is an intriguing book-length essay. It is focused on two "modern" illnesses: tuberculosis and cancer. Sontag points to these as the reigning mystery maladies or defining diseases of the capitalist epoch: tuberculosis until its cure was isolated, and cancer ever since. She does give some passing attention to syphilis, and it is cause for reflection to wonder how the scenarios she describes may have been subsequently altered by the social impact of AIDS. (She in fact did so herself in a 1989 follow-up AIDS and Its Metaphors, which I haven't read.)

She spends a great deal of attention on the psychological characters imputed to the victims of these diseases, demonstrating how the illnesses have been characterized as pathologies of will. I was surprised at how much she credits Wilhelm Reich for the popularity of the psychological theory of cancer--a theory which was certainly important to him, but (I thought) only after his intellectual influence had been significantly marginalized.

Her general contention is that the use of disease metaphors, especially in government, is unhelpful or dangerous, both to the subject being described, and to the actual sufferers of the genuine illness, who are then stigmatized and discouraged from confronting the empirical facts of their condition. In the closing pages of the essay, she admits her own culpability in having written, "the white race is the cancer of human history," so that viewed from its final chapter, the whole book seems like an attempt at expiation for this particular rhetorical wrong.

She recognizes that the rhetorical role of illness is a shifting phenomenon, and at one point describes how "mental illness" has taken over some of the earlier social functions of tuberculosis-as-metaphor. At several points reading Illness as Metaphor, I wondered if the pendulum hasn't crossed over to the other side. Instead of treating physical ailments as spiritual or psychic conditions, has the psychiatric regime perhaps led us to a tendency to treat crises of meaning and purpose as mere "chemical imbalances" that should be treated with psychoactive drugs? Of course, these complementary confusions are by no means mutually exclusive.… (more)
9 more
LibraryThing member wrmjr66
It is not hard to see why this is a classic, even though some of it now seems dated. I had no idea that there was such a stigma attached to cancer in the mid 20th century, but Sontag's elucidation of the language used to describe cancer and tuberculosis is brilliant.
LibraryThing member JFBallenger
This book is widely and rightly hailed for its masterful discussion of how tuberculosis and cancer served as fertile metaphors of disease, decay and disorder in a broad range of discourses throughout our society, most notably politics and economics. Sontag's work opened new avenues of inquiry by showing how this process added to the burden experienced by those suffering from these diseases. However, Sontag seemed a bit naive in her call for a more objective, scientific discourse free of such metaphorical entanglements. We can and should try to be careful of the metaphors we use; but all language, including the language of science, is steeped in metaphor, and metaphors will inevitably serve as a conduit of meaning between disparate realms of human experience.… (more)
LibraryThing member mdstarr
90 pages of brillance.
LibraryThing member victoriahallerman
For anyone who has ever wondered why cancer seems so isolating
LibraryThing member edwinbcn
Illness as metaphor is a long essay by Susan Sontag about the way we write and think about TB and cancer. The essay is extremely well-researched, citing many instances of the use of these two diseases in metaphorical sense. With references to earlier diseases and epidemics, such as the Plague, Sontag argues that the way we talk about cancer can be explained by reviewing the way people used to talk about TB, before its mystery was solved. Once the mystery, viz. its cause, is discovered, fear dissipates and the disease is brought back to human proportions. Cancer, the cause of which is still unknown, is still largely seen as a great enemy, shrouded in mystery. The comparison and description works very well on the level of the disease and its effect on people, but the final section, section 9, is much less successful. In this section Sontag tries to stretch the metaphor to express the state of the social order or politics. This section seems much less well researched, and quite ineffective.… (more)
LibraryThing member whitewavedarling
Sontag's long essay on the metaphors associated with disease is both necessary and thought-provoking. With a focus on TB and cancer, Sontag presents the developmental history of metaphoric associations related to disease, discussing the ways in which these metaphors have evolved and controlled various discussions over the years. Her careful look at inaccuracies and comparisons, along with her clear presentations of metaphors (and related themes) is smart and nuanced, particularly when she looks into the clusters of words used in association with the diseases (ie. military language, language of punishment/justice, etc.) and when she expands on the mindsets that contribute to such discussions (ie. romanticism, paranoia, fear, etc.).

For me, the one drawback to her discussion is that I'd like to see more of a discussion of how these metaphors and approaches have affected not only our language, but the people who are personally affected/infected and/or working with the diseases in question.

Overall, though, this is a straightforward and intelligent look at disease and metaphor, and the ways in which our popular understandings of disease have developed (often faultily). Well worth the time, and highly recommended.… (more)
LibraryThing member gregorybrown
Outstanding work of criticism and history, one loomed over by the coming AIDS epidemic that started a few years after publication.

When the causes and mechanism of disease are mysterious or unknown, metaphoric meaning rushes in to fill the gap. TB (and later, cancer) filled that role for literature and culture at large, and Sontag gets a lot of mileage from tracking depictions of the two, and how they diverge. Granted, by the time Sontag was writing, cancer was knowable enough that its metaphoric power was failing outside of the generic references to uncontrollable, malignant growth. But soon afterwards, the AIDS epidemic would rise up and prove the subject of endless moralizing by all sides. Sontag was more correct than even she could know.… (more)
LibraryThing member adaorhell
Upsetting my edition doesn't have the add on for AIDS. Could have been a much wider foray -- but what was I going to ask of this woman? To revisit On Illness as she dies in Annie's arm? I'd never ask of her. But only kind of. Because I know I would.
LibraryThing member Niecierpek
Sontag, a cancer survivor at the time, wrote this book to explore and elucidate the metaphors used to describe serious illnesses like cancer and tuberculosis. Sontag argues that the metaphors and mythology created around these diseases make them seem evil and mysterious and very much like invincible predators, and hence sometimes prevent people from believing in conventional treatment to cure them. In addition, since cancer is seen as obscene, repugnant to the senses, and ill-omened, the person suffering from it is seen as morally, if not literally, contagious. Cancer occupies the spot reserved for TB in the past as a shameful disease meaning imminent death, but unlike TB, which was seen as a more ethereal, and metaphorically, a disease of the soul, cancer is definitely a disease of the body, and many times of its more shameful parts like colon or rectum. Both TB and cancer have been seen as diseases of passion- TB as a result of too much of it, and cancer as a result of too little.
Sontag argues that patients are hardly helped by seeing and hearing all possible evils compared to cancer, and hopes that with advances in the treatment cancer the metaphors will become obsolete.

An interesting book, and since written before the times of AIDS very true about the place cancer and TB have occupied in our mythology. Maybe a bit too repetitious. I did not realize how many famous people suffered from and died of tuberculosis.… (more)
Fewer

Life against death : the psychoanalytical meaning of history by Norman Oliver Brown