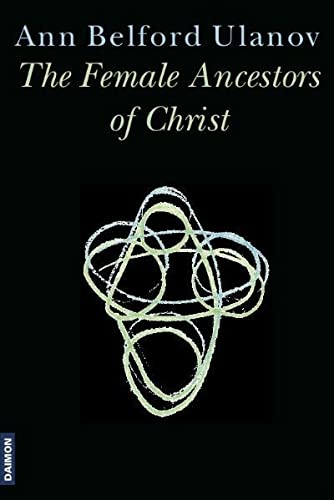 The female ancestors of Christ

The spiritual power of the Feminine shines forth in this psychological study of four Old Testament heroines from Jesus’ family tree. Tamar, Rahab, Ruth, and Bathsheba are the only women mentioned by name in the Gospels’ genealogies and, for Ann Belford Ulanov, this indicates that they impart something essential to the lineage of Christ. By exploring their brave and unconventional lives, she demonstrates how salvation enters the world in the feminine mode of being human, through these women’s embodiment of such powerful and deeply feminine qualities as ingenuity, audacity, determination, compassion, seduction, and devotion.

“Like bolts of lightning, the stories of these outcast virgins illuminate what spiritual wholeness can be in the lives of contemporary women and men.
Ann Ulanov’s riveting insights into their daring acts reveal their deep significance in the genealogy of Jesus and expand our understanding of the words courage and love.” — Marion Woodman, author of Addiction to Perfection and Leaving my Father’s House

Ann Belford Ulanov, M.Div., Ph.D., L.H.D., is the Christiane Brooks Johnson Professor of Psychiatry and Religion, Emerita, at Union Theological Seminary, a psychoanalyst in private practice, and a member of the Jungian Psychoanalytic Association, New York City, and the International Association for Analytical Psychology. She is the author of many books, her most recent including: Madness and Creativity (Carolyn and Ernest Fay Series in Analytical Psychology, 2013); The Unshuttered Heart: Opening to Aliveness and Deadness in the Self (2007); Spirit in Jung (2005); Spiritual Aspects of Clinical Work (2004); and Attacked by Poison Ivy, A Psychological Study (2002). She is the co-author, with her late husband Barry Ulanov, of Religion and the Unconscious; Primary Speech: A Psychology of Prayer; Cinderella and Her Sisters: The Envied and the Envying; The Witch and The Clown: Two Archetypes of Human Sexuality; The Healing Imagination; and Transforming Sexuality: The Archetypal World of Anima and Animus.

Receiving woman : studies in the psychology and theology of the feminine by Ann Belford Ulanov
Ego and archetype; individuation and the religious function of the psyche by Edward F. Edinger
Jung and the Bible by Wayne G. Rollins
Psychology and Religion Based on the Tery Lectures by C. G. Jung
A blue fire : selected writings by James Hillman
5 more
Androgyny : toward a new theory of sexuality by June Singer
The pregnant virgin : a process of psychological transformation by Marion Woodman
Jung & feminism : liberating archetypes by Demaris S. Wehr
Addiction to perfection : the still unravished bride : a psychological study by Marion Woodman
The feminine dimension of the divine by Joan Chamberlain Engelsman
Fewer