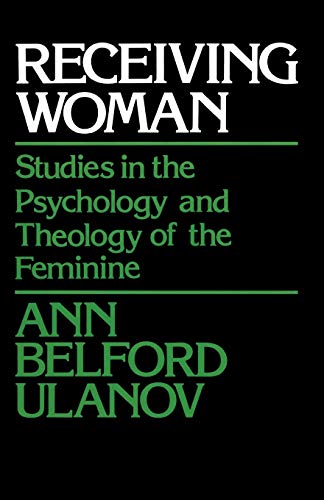 Receiving woman : studies in the psychology and theology of the feminine

We live in a time of unparalleled opportunity for women and a time, just because of that opportunity, of great stress. It is a time when every woman can find her own particular style, to develop her skills, to acknowledge her needs and failures, and to claim both her satisfactions and dissatisfactions. The old stereotypes are all but dead. But another danger threatens; of new stereotyped roles for women in the very range of choices and opportunities presented to the.
"RECEIVING WOMAN grew out of a decade of reflections on women’s experiences - my own, my patients’, and my students’," writes Professor Ulanov. "From all of them, a common voice emerged speaking about each woman’s struggle to receive all of herself. Each was trying to find and put together different parts of herself into a whole that was personal, alive, and real to her and to others.
I know that women want to be all of themselves and want to be their own selves, not examples of types. They want to work out their own individual combinations of what have been called the masculine and feminine parts of themselves. This book focuses on that possibility, on women receiving themselves, all of themselves, wisely and gladly."

Ann Belford Ulanov, M.Div., Ph.D., L.H.D., is the Christiane Brooks Johnson Professor of Psychiatry and Religion, Emerita, at Union Theological Seminary, a psychoanalyst in private practice, and a member of the Jungian Psychoanalytic Association, New York City, and the International Association for Analytical Psychology. She is the author of many books, her most recent including: Madness and Creativity (Carolyn and Ernest Fay Series in Analytical Psychology, 2013); The Unshuttered Heart: Opening to Aliveness and Deadness in the Self (2007); Spirit in Jung (2005); Spiritual Aspects of Clinical Work (2004); and Attacked by Poison Ivy, A Psychological Study (2002). She is the co-author, with her late husband Barry Ulanov, of Religion and the Unconscious; Primary Speech: A Psychology of Prayer; Cinderella and Her Sisters: The Envied and the Envying; The Witch and The Clown: Two Archetypes of Human Sexuality; The Healing Imagination; and Transforming Sexuality: The Archetypal World of Anima and Animus

Knowing woman: a feminine psychology by Irene Claremont de Castillejo
The pregnant virgin : a process of psychological transformation by Marion Woodman
Leaving my father's house : a journey to conscious femininity by Marion Woodman
To be a woman : the birth of the conscious feminine by Connie Zweig
Addiction to perfection : the still unravished bride : a psychological study by Marion Woodman
30 more
Descent to the Goddess : a way of initiation for women by Sylvia Brinton Perera
The woman in the mirror : analytical psychology and the feminine by Claire Douglas
The sacred prostitute : eternal aspect of the feminine by Nancy Qualls-Corbett
Jung & feminism : liberating archetypes by Demaris S. Wehr
The old wise woman : a study of active imagination by Rix Weaver
Female Authority: Empowering Women through Psychotherapy (Empowering Women Through Psychotherapy - A Jungian Approach) by Polly Young-Eisendrath
The goddess within : a guide to the eternal myths that shape women's lives by Jennifer Barker Woolger
Return of the goddess by Edward C. Whitmont
The feminine dimension of the divine by Joan Chamberlain Engelsman
Women who run with the wolves : myths and stories of the wild woman archetype by Clarissa Pinkola Estés
Goddesses in everywoman : a new psychology of women by Jean Shinoda Bolen
Puer papers by James Hillman
Facing the gods by James Hillman
In the ever after : fairy tales and the second half of life by Allan B. Chinen
The witch and the clown : two archetypes of human sexuality by Ann Belford Ulanov
Dreams, a portal to the source by Edward C. Whitmont
Woman's mysteries, ancient and modern : a psychological interpretation of the feminine principle as portrayed in myth, story, and dreams by M. Esther Harding
Coming to age : the croning years and late-life transformation by Jane R. Prétat
Hags and heroes : a feminist approach to Jungian psychotherapy with couples by Polly Young-Eisendrath
Lying with the heavenly woman : understanding and integrating the feminine archetypes in men's lives by Robert A. Johnson
Sandplay : a psychotherapeutic approach to the psyche by Dora M. Kalff
The wounded woman : healing the father-daughter relationship by Linda Schierse Leonard
Projection and re-collection in Jungian psychology : reflections of the soul by Marie-Luise Von Franz
Lady of the beasts : ancient images of the Goddess and her sacred animals by Buffie Johnson
Circle of care : clinical issues in Jungian therapy by Warren Steinberg
The nature of loving : patterns of human relationship by Verena Kast
Phallos : sacred image of the masculine by Eugene Monick
Anima : an anatomy of a personified notion by James Hillman
The fisher king and the handless maiden : understanding the wounded feeling function in masculine and feminine psychology by Robert A. Johnson
Alchemy in a modern woman: a study in the contrasexual archetype by Robert Grinnell
Fewer