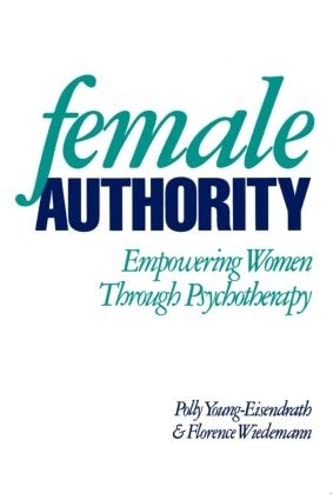 For women in Western society, there is no straightforward path of development to autonomous adulthood. The double-bind of female authority--that a women cannot be both a healthy adult and an ideal woman-- is the context in which a woman must construct her self in this culture. Whether she sees herself as "too needy" or "too controlling," "too insecure" or "too self-reliant," she is gathering evidence to support a theory of personal inadequacy. The traditional perspectives of psychodynamics and psychopathology reinforce women's sense of inferiority. How then does a woman claim her own authority-- the validity of her own truth, beauty, goodness, originating in her own experience.

Young-Eisendrath and Wiedemann break with the tradition of "deficit thinking," the examination of what is absent, wrong, or deficient. Recognizing this as a fundamental barrier to the empowerment of women, they work instead from an understanding of what is already strong and satisfying in the lives of women and girls in a patriarchal society. This volume unravels the paradox of female authority through the examination of its sociocultural, symbolic, and personal dimensions. Chapters 1 through 4 present a re-visioning of the female self, using the psychologies of C. G. Jung and Jane Loevinger as major theoretical frameworks. The authors argue for a modification of Jung's concept of "animus'' --the repressed masculine in the girl or woman--and in chapters 5 through 8 present a detailed model of psychotherapy based on five stages of animus development. Using a wealth of clinical material from their own practices --including two extended case presentations in chapters 9 through 11-- the authors skillfully illustrate their own efforts to help women assume greater personal authority. The book's concluding chapter presents New Texts and Contexts for Female Development.

Unique in its combination of feminist theory, social psychology, and Jungian psychology, FEMALE AUTHORITY offers a fresh approach to the analysis of gender concerns in identity. The book will be of great value to practitioners and theoreticians in the human services. The discussion of women's self-esteem and personal authority, and the probing of conflicts inherent in female identity in our society, place this book among the major recent contributions to the development of a psychology of women.

Knowing woman: a feminine psychology by Irene Claremont de Castillejo
Hags and heroes : a feminist approach to Jungian psychotherapy with couples by Polly Young-Eisendrath
The spiral way : a woman's healing journey by Aldo Carotenuto
Addiction to perfection : the still unravished bride : a psychological study by Marion Woodman
The pregnant virgin : a process of psychological transformation by Marion Woodman
25 more
Change of life : a psychological study of dreams and the menopause by Ann Mankowitz
Alchemy in a modern woman: a study in the contrasexual archetype by Robert Grinnell
Leaving my father's house : a journey to conscious femininity by Marion Woodman
The ravaged bridegroom : masculinity in women by Marion Woodman
Descent to the Goddess : a way of initiation for women by Sylvia Brinton Perera
Return of the goddess by Edward C. Whitmont
Circle of care : clinical issues in Jungian therapy by Warren Steinberg
Psychotherapy grounded in the feminine principle by Barbara Stevens Sullivan
Psyche and symbol : a selection from the writings of C.G. Jung by C. G. Jung
The analytic encounter : transference and human relationship by Mario Jacoby
Striving Toward Wholeness by Barbara Hannah
Jung, Synchronicity, and Human Destiny by Ira Progoff
Jungian analysts : their visions & vulnerabilities by J. Marvin Spiegelman
Dreambody, the body's role in revealing the self by Arnold Mindell
The owl was a baker's daughter : obesity, anorexia nervosa and the repressed feminine : a psychological study by Marion Woodman
Narcissism and character transformation : the psychology of narcissistic character disorders by Nathan Schwartz-Salant
Receiving woman : studies in the psychology and theology of the feminine by Ann Belford Ulanov
Woman changing woman : feminine psychology re-conceived through myth and experience by Virginia Beane Rutter
The symbolic quest : basic concepts of analytical psychology by Edward C. Whitmont
Jung & feminism : liberating archetypes by Demaris S. Wehr
C.G. Jung : the fundamentals of theory and practice by Elie G. Humbert
The road by the river : a healing journey for women by Djohariah Toor
Encounters with the soul : active imagination as developed by C. G. Jung by Barbara Hannah
To be a woman : the birth of the conscious feminine by Connie Zweig
The Jungian experience : analysis and individuation by James A. Hall
Fewer