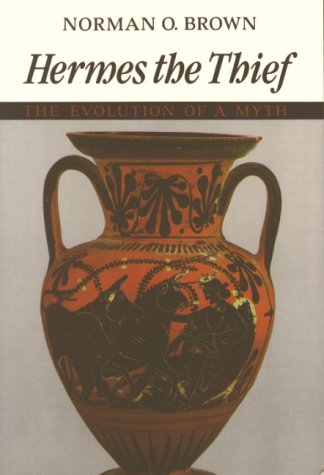 Hermes the thief : the evolution of a myth

Hermes is a vital and complex figure in Greek mythology―trickster and culture hero, divine child and patron of stealthy action, master of magic words, seducer and whisperer. Shepherd, artisan, herald, musician, athlete, merchant―who is this tricky shape-shifter, confronting us at every turn?

In this classic, prescient work (first published in 1947 and foreshadowing all subsequent work greeting the return of the gods), Brown asks: Is Hermes the Thief the prototype from which, by extension and analogy, the Trickster was derived? Alternatively, is the notion of trickery the fundamental idea and theft merely a specific manifestation of it?

This thoughtful study will be of interest to anyone wishing a fresh view of an important, often misunderstood, character of Greek mythology.

Hermes, guide of souls by Karl Kere nyi
Athene : virgin and mother : a study of Pallas Athene by Karl Kerényi
Prometheus : archetypal image of human existence by Karl Kerényi
The heroes of the Greeks by Karl Kerényi
Goddesses of Sun and Moon : Circe, Aphrodite, Medea, Niobe by Karl Kerényi
5 more
The Ulysses theme : a study in the adaptability of a traditional hero by William Bedell Stanford
Pagan grace : Dionysos, Hermes, and Goddess Memory in daily life by Ginette Paris
The Homeric hymns by Charles Boer
The Olympians : ancient deities as archetypes by Joanne Stroud
The goddess : mythological images of the feminine by Christine Downing
Fewer