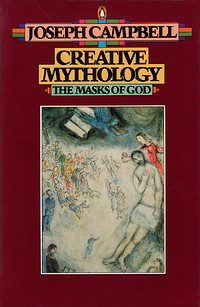 The masks of God: creative mythology

The Masks of God (Volume 4)

Explore the power of myth as it exploded from medieval Europe into the modern world
In this fourth volume of The Masks of God — Joseph Campbell's major work of comparative mythology — the pre-eminent mythologist looks at the birth of the modern, individualistic mythology as it developed in Europe beginning in the twelfth century A.D. up through the modernist art of the twentieth century.

The Masks of God is a four-volume study of world religion and myth that stands as one of Joseph Campbell's masterworks. On completing it, he wrote:

Its main result for me has been the confirmation of a thought I have long and faithfully entertained: of the unity of the race of man, not only in its biology, but also in its spiritual history, which has everywhere unfolded in the manner of a single symphony, with its themes announced, developed, amplified and turned about, distorted, reasserted, and today, in a grand fortissimo of all sections sounding together, irresistibly advancing to some kind of mighty climax, out of which the next great movement will emerge.
This new digital edition, part of the Collected Works of Joseph Campbell series, includes over forty new illustrations.

LibraryThing member plutarch
In this, the culmination of his master work, Campbell displays the marvelous beauty of the spiritual fabric mankind has draped itself with. He guides us through the weaving of the fabric and explains the origin of the yarn. He allows us to perceive the imperfections and gently come to terms with
Show More
our own deeply rooted faiths. Unlike Dawkins, who tears the fabric to shreds and shoves it up our asses, Campbell, steeped in Jungian thought, maintains the development of fuller consciousness through dream, myth, and realization. Campbell is subtle and unassuming. He comes and goes within our intellectual circles, but this is in accord with our growing comprehension of his work. He is years ahead of us, and farther out than most of us wish to travel. Better to browse through a Bullfinch and stay in your comfort zone, than drown in Campbell and tread the long lonely road of the spiritual warrior.
Until you have read this work, do not pretend to know him through the Power Of Myth with Bill Moyers. This is a monumental achievement and deserves the many long quiet nights you need to invest in it.
Show Less
2 more
LibraryThing member LisaMaria_C
Creative Mythology is the fourth and last volume in Masks of God. Up to this book, I thought the work had become stronger with each volume. The first book, Primitive Mythology published in 1959 by and large dealt with the pre-historic era Campbell sees at the root of world culture, and so relied
Show More
quite a bit on archeology and the speculations of such psychologists as Freud. It was very dry and I suspected, dated. The second volume, Oriental Mythology, primarily examined Egypt, India and China--and certainly made me want to read more--and reread Confucius and Lao Tzu in light of what I'd learned. In Occidental Mythology, Campbell examined the religious/mythological heritage of the West, both of the Greco-Roman classical world and the Levant as expressed in the scripture of Zoroasterism, Judaism, Christianity and Islam.

Creative Mythology examines something quite different. Not the dogma found in scripture nor indigenous ritual and artifacts. Rather it examines the "living mythology" of literature, music and paintings. Campbell sees in the Renaissance the "dawning day and civilization of the individual" who seeks to be "not coercive, but evocative." Grounded in individualism, this new ethos is expressed both in the rise, or given classical culture, the return, of the idea of reason in the sciences but also in the ideal of romantic love found in the troubadours and Arthurian legends. Campbell also examines modern users and makers of mythos such as Wagner, Picasso, Thomas Mann--and giving in my opinion far too much space to James Joyce, but then I'm not a fan. I read Joyce's Ulysses only three months ago, so it, and how much I detested it, is fresh in my mind. With the previous volumes there was no doubt in my mind about the centrality and importance of the texts and artifacts Campbell was examining and Campbell was at his fascinating best making connections between them. But in this volume where Campbell mostly plays literary critic, I found him at his most dull, tedious, repetitive and impenetrable. So though I gave the first volume 3 stars as worth reading, the next 4 stars as something I learned much from and the next one after that 5 stars for some amazing connections, insights and arguments, this last volume only gets two stars from me--and I'm being generous.
Show Less
LibraryThing member ghneumann
After exploring ancient, Eastern, and Western mythology and religion up until the approximate time of the Dark Ages, Joseph Campbell's final volume of his Masks of God series deals with the "modern" world. As societies became increasingly mobile and fluid, the social purpose of religion and myth
Show More
(transmission of local cultural "rules" to each generation, and the acceptance of those rules) fades in importance. Now what?

Creative Mythology explores what happens as cultures begin to intermingle, how local symbols are repurposed for new reasons in new places. He uses the lens of epic poetry to show us the heretic Christian ideas of Tristan & Isolde, the heavily pagan roots of Beowulf, and the Islamic influence on Dante's Divine Comedy (which was super interesting to me, since I took a class on just this work in college, and to the best of my recollection, this never came up). He moves into the modern world by dissecting some of the works of Thomas Mann and James Joyce (Finnegan's Wake, Ulysses, and Portrait of the Artist as a Young Man). Portrait was something I read several years ago that I enjoyed not at all and remembered precious little of, and after reading about it here, I'm not sure I want to read Ulysses even though it's a "classic" because it sounds very tiresome. Campbell wraps up his review by discussing the Holy Grail mythologies in the Knights of the Round Table/Arthurian legends (this section is very very long), and then concludes by reflecting back on the functions of mythologies, and how they have and do work (or not, as the case may be).

I'm not going to lie...I'm very glad to be done with this series. It was very informative, but only sporadically interesting. Do I feel much better versed in world religion and mythology? Yes. Would my life have been just as lovely without it? Absolutely.
Show Less
Fewer