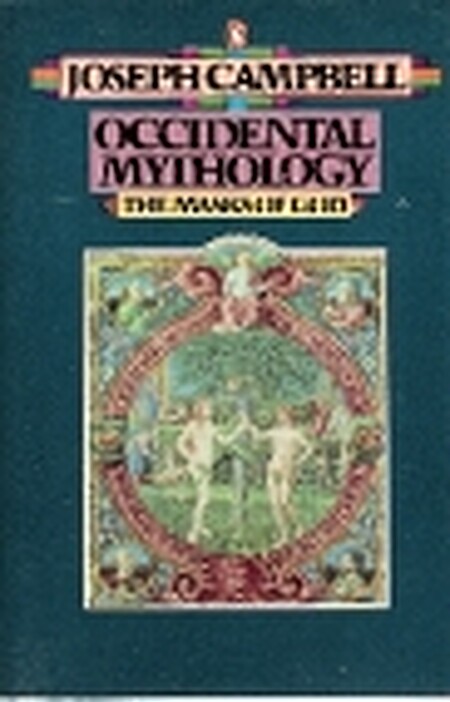 The masks of God : occidental mythology

The Masks of God (Volume 3)

Explore the power of myth as it flowered in the ancient Near East and the Classical World
In this third volume of The Masks of God — Joseph Campbell’s major work of comparative mythology — the preeminent mythologist looks at the pagan religions of Greece, Rome, and the Celts, as well as the Abrahamic religions — Zoroastrianism, Judaism, Christianity, and Islam. Exploring the West’s shift from female-centered to male-centered mythology, Campbell examines the distinguishing characteristics and the shared root concepts of these mythologies.The Masks of God is a four-volume study of world religion and myth that stands as one of Joseph Campbell’s masterworks. On completing it, he wrote:

Its main result for me has been the confirmation of a thought I have long and faithfully entertained: of the unity of the race of man, not only in its biology, but also in its spiritual history, which has everywhere unfolded in the manner of a single symphony, with its themes announced, developed, amplified and turned about, distorted, reasserted, and today, in a grand fortissimo of all sections sounding together, irresistibly advancing to some kind of mighty climax, out of which the next great movement will emerge.

This new digital edition is part of the Collected Works of Joseph Campbell series.

LibraryThing member LisaMaria_C
This is the third volume of Campbell's The Masks of God and each installment so far has been increasingly impressive. The first volume, Primitive Mythology dealt with pre-historic and those contemporary indigenous societies still with a paleolithic level of technology. By necessity, it depended upon archeological evidence and a lot of psychological speculations, those of Freud in particular. It made for very dry reading pretty much throughout and made me a little skeptical of his take--what if the archeological evidence in the preceding decades since the 1959 publication had overtaken him? And I admit I'm skeptical of Freud's views on human psychology. That book I rated three stars. The second book, Oriental Mythology, I liked quite a bit more. I'd read Lao Tzu and Confucius in the past, and knew a little of Asian philosophy and religion from various secondary sources, but I felt this gave me a grounding and insight I lacked and would enrich future readings in the subject--and the book did make me want to read much more. That made for a four star rating.

But yes, I did think this book took things to another level. Or maybe it's just his arguments are much more electric here because I'm much more invested in the subject as an American, someone raised as a Christian in an overwhelmingly Christian nation. There's nothing very new in his line of argument. I'd heard much of this before in casual conversations and what I've read here and there. I certainly have heard others repeat his aphorism that "Gods suppressed become devils." It's one thing though to have someone claim that. It's another to see a drawing of a snake coiling itself around a tree and then have that identified as a Sumerian seal depicting their snake God. Campbell includes not just a lot of illustrations but a lot of lengthy quotations of various scriptures and myth. I tended to feel that rather heavy-handed in the previous books, but I think it pays off here, because yes the connections and arguments Campbell makes are subversive from a Judeo-Christian point of view, and Campbell does need to build his arguments carefully.

I think he does so very convincingly and compellingly, even if, as in all non-fiction books making claims radical in scope, I do feel itchy, wondering what could be said on the other side. It's times like these I do miss studying a book in college, and the give and take of debate. I'm skeptical for his claims for a matriarchal substratum in the mythologies for instance. From what I've read, just because a society worshiped goddesses is no evidence against patriarchy and misogyny and many have disputed this "Mother Right" hypothesis so beloved among New Age devotees. I think it's unfair nevertheless to categorize Campbell as anti-Christian or anti-Catholic as some have in reviews, because I think such readers are missing the point--or perhaps haven't read the first two books. Comparative Mythology is Campbell's job and it's the point of these books to unmask the universal in the various faiths. He doesn't pull punches no, and he definitely has his own values and beliefs that peak out at times.

But it's not as if he gives indigenous or "oriental" cultures a pass and only focuses on Christianity as particularly destructive. From the first he's discussed the evidence of just how bloody is the history of the true believer, whether it's the evidence for human sacrifice in polytheistic religions or the "purification" internal and external to monotheistic religions that burn books as well as people. In Oriental Mythology Campbell wrote of the claim of the Chinese to five thousand years of history as mythological--a claim I've heard repeated as recently as last week in a commercial for a dance company. According to Campbell, the evidence is that the Chinese culture is no older than around 3,000 years old beginning with the Shang Dynasty. One of Campbell's themes as he stated it in this book is that "for the vulgar, ill-or uninstructed mind, myths tend to become history." When it's not our ox being gored, the reader tends to nod in agreement. But, I admit, for those who insist on the historicity of Abraham and Moses, Campbell can make for disturbing, challenging reading.

Which doesn't mean that's a bad thing.… (more)
2 more
LibraryThing member saturnloft
This is the volume in Joseph Campbell's Masks of God that covers Judaism, Christianity, & Islam. It is especially useful for illuminating the fascinating and often surprising foundations of Judeo-Christian myth, and one would be hard-pressed to find a more meticulous and thorough guide to such things. This is an exemplary work, although not quite perfect. For instance, Campbell sometimes made connections that later historical discoveries proved erroneous (He implied Stonehenge was inspired by Mycenaean constructions. This was believed by a number of people in Campbell's time. Now we know that Stonehenge is far older than previously thought.)… (more)
LibraryThing member ghneumann
Perhaps I'm just getting more used to Joseph Campbell's writing style, perhaps it's just that The Masks of God has shifted to a religious tradition with which I am very familiar (not only the Judeo-Christian belief system I was raised in, but the Greek and Roman mythology that I've loved since I was a child), but for me, Occidental Mythology was the most accessible volume of this set for me so far.

In this third volume, Campbell talks about the mythology of the so-called Western World: Greek myth, Roman myth, ancient Arab/Hebrew myth, Zoroastrianism, Judaism, Christianity, and Islam. Like in the previous volume on Oriental mythology, I'm side-eyeing this category fraud a little: Middle Eastern myth of the ancient world is much more closely related to Egyptian mythology than the Jewish religion that eventually developed, but he clearly doesn't want to break it up like that because it doesn't fit his thesis. But even with nonfiction, you have to accept that you're on the road the author is taking you on, even if you think you know a better route.

His Western bias isn't as obvious as it has been previously until the conclusion chapter at the very end...maybe he feels less of a need to editorialize on home turf, but he doesn't shy away from criticism of this tradition either. He points out factual and logical inconsistencies within texts like the Bible, and reminds the reader that their holy books were often written long after the facts alleged therein had taken place (or not actually taken place, as the case may be). He also touches on internal conflicts and differing interpretations, and the power struggles that went on behind what we today would consider long-settled matters. Even through his bias, he treats all world mythology (including the Judeo-Christian tradition) as, well, mythology, reminding us in the Western World that our dominant religious belief system is, at its heart, the myths of a nomadic tribe of desert sheepherders.

I won't pretend that I'm not happy that I'm almost done with this set. While it's been interesting and sometimes illuminating reading, it is, like I've said already with the other volumes, very dense and challenging to read as a pleasure exercise.… (more)
Fewer

The masks of God: creative mythology by Joseph Campbell
The inner reaches of outer space : metaphor as myth and as religion by Joseph Campbell
The hero with a thousand faces by Joseph Campbell
Myths, dreams, and religion by Joseph Campbell
Man and time : papers from the Eranos yearbooks : Henry Corbin, Mircea Eliade, C.G. Jung, Max Knoll, G. van der Leeuw, Louis Massignon, Erich Neumann, Helmuth Plessner, Adolf Portmann, Henri-Charles Puech, Gilles Quispel, Hellmut Wilhelm by Joseph Campbell
11 more
The golden bough by Sir James George Frazer
The White Goddess : a historical grammar of poetic myth by Robert Graves
Essays on a science of mythology : the myth of the divine child and the mysteries of Eleusis by C. G. Jung
The myth of the eternal return : or, Cosmos and history by Mircea Eliade
Shamanism: archaic techniques of ecstasy by Mircea Eliade
The great mother : an analysis of the archetype by Erich Neumann
Myths and symbols in Indian art and civilization by Heinrich Robert Zimmer
Man and his symbols by C. G. Jung
The origins and history of consciousness by Erich Neumann
The language of the goddess : unearthing the hidden symbols of western civilization by Marija Gimbutas
The grail legend by Emma Jung
Fewer