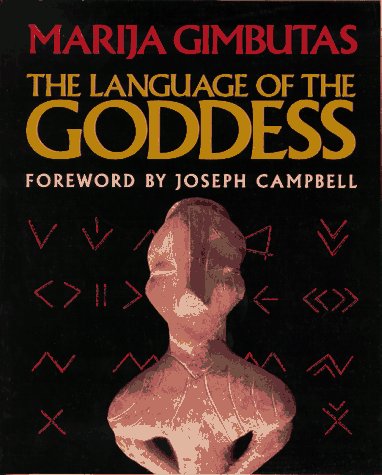 The language of the goddess : unearthing the hidden symbols of western civilization

The Goddess is the most potent and persistent feature in the archaeological records of the ancient world, a symbol of the unity of life in nature and the personification of all that was sacred and mysterious on earth.

In this pioneering and provocative volume, Marija Gimbutas resurrects the world of the Goddess-worshipping, earth-centered cultures, bringing ancient matriarchal society vividly to life. She interweaves comparative mythology, early historical sources, linguistics, ethnography, and folklore to demonstrate conclusively that Goddess-worship is at the root of Western civilization. Illustrated with nearly 2,000 symbolic artifacts, Gimbutas' magnum opus is at once a "pictorial script" of the prehistoric Goddess religion and an authoritative work that takes these ancient cultures from the realm of speculation into that of documented fact. Over 500 illustrations.

LibraryThing member keylawk
As Joseph Campbell explains in the Foreword, this assembly of several thousand artifacts by Gimbutas from Neolithic village sites enables us to understand Neolithic Europe, is comparable to the "Rosetta Stone" in establishing a glossary of the hieroglyphs. With these keys, we are able to access the treasury of the past.

Having been r… (more)
1 more
LibraryThing member hailelib
Beginning with a short Foreword by Joseph Campbell and an Introduction by the author, this book is illustrated on nearly every page by multiple photos and drawings of the artifacts being discussed. The author believes that the symbols craved or painted on cave walls, and tomb and temple walls, and pottery, as well as the forms of the pottery and sculptures are a language of the worship of the early European Goddess. She also shows how the worship of the various forms of the Goddess went underground, so to speak, with the arrival of the Indo-European gods, and traces its survival through the ages with traces still to be found in folk customs and legends of the present.

While the subject was interesting to me, this book would only be for those with a great curiosity in this area because of the overwhelming amount of material and the repetition as she attempts to convince the reader. I did eventually start skimming in places since the information in the captions was often exactly reproduced in the text.… (more)
Fewer

Lady of the beasts : ancient images of the Goddess and her sacred animals by Buffie Johnson
The goddesses and gods of Old Europe, 6500-3500 BC, myths and cult images by Marija Alseikaitė Gimbutas
The myth of the goddess : evolution of an image by Anne Baring
The great mother : an analysis of the archetype by Erich Neumann
The chalice and the blade : our history, our future by Riane Tennenhaus Eisler
9 more
Lost goddesses of early Greece : a collection of pre-Hellenic myths : with a new preface by Charlene Spretnak
Descent to the Goddess : a way of initiation for women by Sylvia Brinton Perera
The goddess : mythological images of the feminine by Christine Downing
Inanna, queen of heaven and earth : her stories and hymns from Sumer by Diane Wolkstein
The White Goddess : a historical grammar of poetic myth by Robert Graves
Woman's mysteries, ancient and modern : a psychological interpretation of the feminine principle as portrayed in myth, story, and dreams by M. Esther Harding
The crone : woman of age, wisdom, and power by Barbara G. Walker
Goddesses in older women : archetypes in women over fifty by Jean Shinoda Bolen
Goddesses in everywoman : a new psychology of women by Jean Shinoda Bolen
Fewer