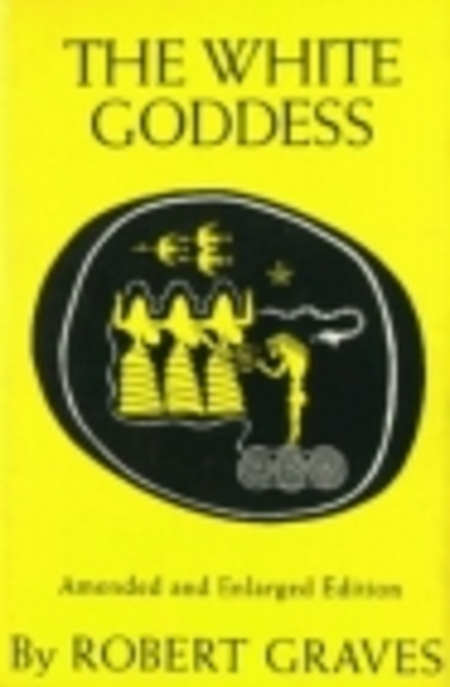 The White Goddess : a historical grammar of poetic myth

This labyrinthine and extraordinary book, first published more than sixty years ago, was the outcome of Robert Graves's vast reading and curious research into strange territories of folklore, mythology, religion, and magic. Erudite and impassioned, it is a scholar-poet's quest for the meaning of European myths, a polemic about the relations between man and woman, and also an intensely personal document in which Graves explores the sources of his own inspiration and, as he believed, all true poetry.
Incorporating all of Graves's final revisions, his replies to two of the original reviewers, and an essay describing the months of illumination in which The White Goddess was written, this is the definitive edition of one of the most influential books of our time.

LibraryThing member eclectica
This classic text by twentieth century poet Robert Graves is considered a foundation work by many Wiccans, even though the assessment of its value in the community has shifted in the last ten or twenty years, for the most part, from that of a valid historical analysis to that of a highly creative personal perspective. I still find it to be a haunting evocation of Goddess spirituality, and it is a fascinating read, but be warned: it raises digression to a high art form.… (more)
11 more
LibraryThing member rcc
Since we (can/could) know by now that much of this book is more of a fearry tale than serious research - as has always been pretended - everyone can, naturally, keep on loving this book and its author ... but we should surely classify it as FICTION.
LibraryThing member gwernin
The first time I read this, my conclusion was "more learned than wise." My opinion has not changed in the intervening fifteen years. Graves admitted that he has no Welsh, and relied on (defective) Victorian translations. Take with a very large pinch of salt.
LibraryThing member Porius
Graves shows us the difference between a glee-man and a poet. The awe-full knowledge of EVERYTHING fell on Robert Graves one afternoon. Now what he needs is a biographer like Roger Lewis - to make everything perfect.
LibraryThing member xnfec
Graves was a very cultured and well read man. This gave him a very singular insight into poetry and history and the ability to write authoritatively on the subject.
LibraryThing member P_S_Patrick
Graves presents us here with his thesis on the meaning of the mythology contained within ancient Welsh literature, including the Book of Taliesin and the Mabinogion, and most importantly the poem of the Battle of the Trees. What we have of these works was written down in medieval times, but Graves believes that they preserve the poetry of a much older oral and bardic tradition, which created riddles to preserve an even older mythology stretching back into pre-Christian and pre-historic times. To the casual listener or reader these works do indeed present a riddle, which Graves believes was both an expression of ingenuity of the bardic mind, and a deliberate effort to avoid censorship of pagan themes within an increasingly Christian culture.

By teasing out the meanings of these works, Graves links in the themes to the wider European body of mythology. He posits an explanation for the riddle in the Battle of Trees, in that it relates to a calendar system with each tree representing a month. He explains why each tree relates to a specific month, linking in the related mythology associated with each tree and its cultural significance. This is then tied in with some non-arboreal riddle like poems that he believes also relate to a calendar system, which he links in to his notion of the White Goddess who is represented by the calendar.

Graves presents at length his evidence for an older common religious substratum, based on the White Goddess, present across Europe and the near East before historical times. He shows us examples taken from Welsh literature, Greek, other European and near Eastern mythology, which support his theory. He believes this female-deity led religious system predates the male deity-led systems which superseded them, and finds traces of this origin preserved in mythology and names.

He goes on to suggest that the White Goddess, the ancient prehistorical source of inspiration, life, and death, is the basis of all true poetry, acting much like an archetype of the unconscious as Jung would have it (though in a rare oversight in what is a well-researched book, he does not seem to have connected his idea specifically with Jung here).

In places this book is quite hard-going, with a lot of densely presented information, many names, aliases, myths, and parallels to keep hold of in the mind simultaneously, in order to follow Graves arguments fully. In this sense it has much in common with Frazer’s Golden Bough, which Graves notes was an important source of inspiration and reference in his writing of this work.

Whether or not the arguments presented here are convincing or not will perhaps depend to a large extent on how patient the reader is in following protracted arguments, or alternatively how much we are willing to accept at face value from the author. This is a complicated, dense, and lengthy work to read, but it does at least bring to light hidden themes present in European mythology, whether or not we accept them as meaning exactly what Graves says that they do. It also presents a style of thinking, poetic thinking as the author calls it (as opposed to scientific thinking), which he believes was a route to a different type of truth (at least so in historic times before it was largely lost), peculiar to the creators and keepers of bardic lore, mythology, and religious secrets in pagan times, who he discusses throughout this work.

In all this contains much of interest in terms of poetry, literature in general, mythology, anthropology, and history, whether or not we accept Graves’ argument in its details. Many readers however will find the content tenuous and overly complex, and if we do not take the author’s word for things, the arguments are often too tangled to easily follow. This is probably not for the casual reader, but if you have an interest in the themes and plenty of time to wade through it and read it patiently, it might be rewarding.… (more)
LibraryThing member tole_lege
I know people who see this as seminal to their own belief systems - I have to admit I've never managed to finish it.

I had thought for some while that Graves was pretty much responsible for the maiden, mother, crone idea but I now gather it goes back one generation further.
LibraryThing member DinadansFriend
A curious extended attempt to discern a unifying body of knowledge and attitude between three poetic universes. He uses the Celtic and Greek canons for his reference corpus. There are many interesting insights, but I did not find the unity that Graves was proclaiming. Still, I have not investigated these lyrics to any great depth, nor read any of the quoted originals. Quite an interesting read, however. My copy was the 1966 edition from Farrar, Straus and Giroux, and the book has had reprints since then.… (more)
LibraryThing member librarianbryan
This is a fun read, but you need to take a lot of it with a grain of salt. The reader can decide for themselves which parts Graves imagines and are historically accurate.
LibraryThing member axelp
"...I cannot make out why a belief in a Father-god's authorship of the universe, and its laws, seems any less unscientific than a belief in a Mother-goddess's inspiration of this artificial system. Granted the first metaphor, the second follows logically--if these are no better than metaphors...."
LibraryThing member lilinah
I got this when i was in high school in the mid-1960s and loved reading it. The history isn't always accurate, but the thought and the writing are creative and inspired, and it is an inspirational read.
LibraryThing member keylawk
The study of two vulgar poems of the 13th century, and review of the narratives, the 'myths', which hag-ride what would otherwise just be an attempt at recording our observations in some manner that seemed useful at the time.
Fewer