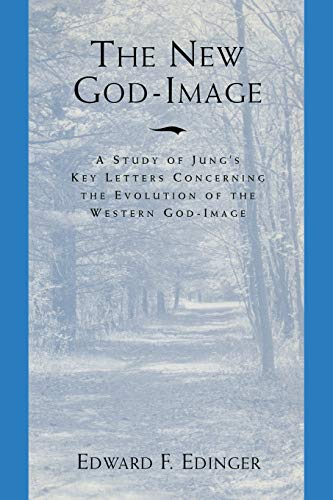 The new God-image : a study of Jung's key letters concerning the evolution of the western God-image

C. G. Jung saw in the cultural history of Western man a progressive evolution of its God-image. During the last ten years of his life, he wrote a series of remarkable letters about the new God-image which is now emerging through the discoveries of depth psychology.

Dr. Edward Edinger has selected fourteen of these letters to discuss and has segmented the book into the following three parts:

Edward F. Edinger is a leading Jungian analyst residing in Los Angeles. He is a founding member of the C. G. Jung Foundation of New York, and former chairman of the C. G. Jung Training Center in New York where he practiced for many years. Dr. Edinger is the author of fourteen books dealing with the Jungian themes of archetypes, psyche, Self, and analysis.

The religious function of the psyche by Lionel Corbett
Complex/archetype/symbol in the psychology of C. G. Jung by Jolande Székács Jacobi
Echo's subtle body : contributions to an archetypal psychology by Patricia Berry
The Bible and the psyche : individuation symbolism in the Old Testament by Edward Edinger, F.
The symbolic quest : basic concepts of analytical psychology by Edward C. Whitmont
38 more
Encounters with the soul : active imagination as developed by C. G. Jung by Barbara Hannah
Jung's thoughts on God : religious depths of the psyche by Donald R. Dyer
The Christian archetype : a Jungian commentary on the life of Christ by Edward F. Edinger
Projection and re-collection in Jungian psychology : reflections of the soul by Marie-Luise Von Franz
Jung's treatment of Christianity : the psychotherapy of a religious tradition by Murray Stein
Alchemical active imagination by Marie-Luise Von Franz
Sacred chaos : reflections of God's shadow and the dark self by Françoise O'Kane
When the spirits come back by Janet Dallett
Dreams, a portal to the source by Edward C. Whitmont
Anatomy of the psyche : alchemical symbolism in psychotherapy by Edward F. Edinger
C.G. Jung and Paul Tillich : the psyche as sacrament by John P. Dourley
Archetypes & strange attractors : the chaotic world of symbols by John R. Van Eenwyk
Liberating the heart : spirituality and Jungian psychology by Lawrence W. Jaffe
The Jungians a comparative and historical perspective by Thomas Kirsch
The Aion lectures : exploring the self in C.G. Jung's Aion by Edward F. Edinger
Mysterium coniunctionis : an inquiry into the separation and synthesis of psychic opposites in alchemy by C. G. Jung
The mystery of the coniunctio : alchemical image of individuation : lectures by Edward F. Edinger
Puer papers by James Hillman
Transformation of the God-image : an elucidation of Jung's Answer to Job by Edward F. Edinger
Saturday's child : encounters with the dark gods by Janet Dallet
Archetypal psychology : a brief account : together with a complete checklist of works by James Hillman
Understanding dreams by Mary Ann Mattoon
The illness that we are : a Jungian critique of Christianity by John P. Dourley
C.G. Jung : his myth in our time by Marie-Luise Von Franz
Archetypal medicine by Alfred J. Ziegler
The stuff that dreams are made on : a Jungian interpretation of literature by Clifton Snider
The problem of the puer aeternus by Marie-Luis Von Franz
Pathways into the Jungian world : phenomenology and analytical psychology by Roger Brooke
Animus and anima by Emma Jung
Archetypal dimensions of the psyche by Marie-Luise Von Franz
The psychology of C.G. Jung : an introduction with illustrations by Jolande Jacobi
C. G. Jung speaking : interviews and encounters by William McGuire
The Mysterium lectures : a journey through C.G. Jung's Mysterium coniunctionis by Edward F. Edinger
Love, celibacy, and the inner marriage by John P. Dourley
Ego and archetype; individuation and the religious function of the psyche by Edward F. Edinger
C.G. Jung, Psychological reflections : a new anthology of his writings, 1905-1961 by C. G. Jung
The sacred heritage : the influence of shamanism on analytical psychology by Donald Sandner
The Collected Works of C.G. Jung, Volumes 4,12,16: Dreams by C. G. Jung
Fewer