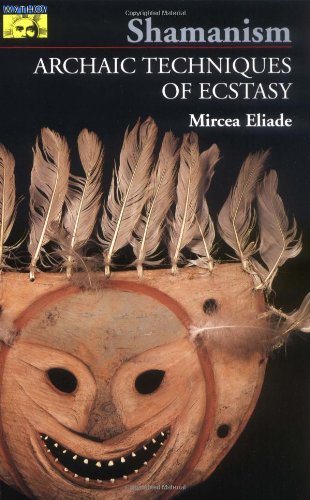 First published in 1951, Shamanism soon became the standard work in the study of this mysterious and fascinating phenomenon. Writing as the founder of the modern study of the history of religion, Romanian émigré--scholar Mircea Eliade (1907-1986) surveys the practice of Shamanism over two and a half millennia of human history, moving from the Shamanic traditions of Siberia and Central Asia--where Shamanism was first observed--to North and South America, Indonesia, Tibet, China, and beyond. In this authoritative survey, Eliade illuminates the magico-religious life of societies that give primacy of place to the figure of the Shaman--at once magician and medicine man, healer and miracle-doer, priest, mystic, and poet. Synthesizing the approaches of psychology, sociology, and ethnology, Shamanism will remain for years to come the reference book of choice for those intrigued by this practice.

LibraryThing member Mary_Overton
"... in all human beings the desire to enter into contact with the sacred is counteracted by the fear of being obliged to renounce the simple human condition and become a more or less pliant instrument for some manifestation of the sacred (gods, spirits, ancestors, etc.).
"In the following pages the deliberate quest for magico-religious powers or the grant of such powers by gods and spirits will concern us only in so far as it entails a massive acquisition of the sacred destined to make a radical change in the socio-religious practice of the subject, who finds himself transformed into a specialized technician. Even in cases of this kind we should discover a certain resistance to 'divine election.'" pg. 23

The author points out "likenesses between the accounts of shamanic ecstasies and certain epic themes in oral literature. The shaman's adventures in the other world, the ordeals that he undergoes in his ecstatic descents below and ascents to the sky, suggest the adventure of the figures in popular tales and the heroes of epic literature. Probably a large number of epic 'subjects' or motifs, as well as many characters, images, and cliches of epic literature, are, finally, of ecstatic origin, in the sense that they were borrowed from the narratives of shamans describing their journeys and adventures in the superhuman worlds.
"It is likewise probable that the pre-ecstatic euphoria constituted one of the universal sources of lyric poetry. In preparing his trance, the shaman drums, summons his spirit helpers, speaks a 'secret language' or the 'animal language,' imitating the cries of beasts and especially the songs of birds. He ends by obtaining a 'second state' that provides the impetus for linguistic creation and the rhythms of lyric poetry. Poetic creation still remains an act of perfect spiritual freedom. Poetry remakes and prolongs language; every poetic language begins by being a secret language, that is, the creation of a personal universe, of a completely closed world. The purest poetic act seems to re-create language from an inner experience that, like the ecstasy or the religious inspiration of 'primitives,' reveals the essence of things. It is from such linguistic creations, made possible by pre-ecstatic 'inspiration,' that the 'secret languages' of the mystics and the traditional allegorical languages later crystallize." pp. 510-511… (more)
2 more
LibraryThing member engpunk77
This was a somewhat interesting book...required reading for a class on John Milton. Isn't that odd? We were to make connections between Milton's authorship of Paradise Lost and the Shaman's ecstatic experience.
A heavy book, written by a scholar, not a new age Llewellyn author.
LibraryThing member phoenixcomet
Read chapters 1 and 2. Excellent study of shamanism world-wide and considered the classic study in shamanic healing. Will continue reading at a later date.
Fewer

The myth of the eternal return : or, Cosmos and history by Mircea Eliade
The great mother : an analysis of the archetype by Erich Neumann
Masks of God: Primitive mythology by Joseph Campbell
The White Goddess : a historical grammar of poetic myth by Robert Graves
Mysterium coniunctionis : an inquiry into the separation and synthesis of psychic opposites in alchemy by C. G. Jung
8 more
The masks of God: Oriental Mythology by Joseph Campbell
The masks of God : occidental mythology by Joseph Campbell
Psychology and alchemy by C. G. Jung
The golden bough by Sir James George Frazer
Giordano Bruno and the Hermetic tradition by Frances Amelia Yates
Inanna, queen of heaven and earth : her stories and hymns from Sumer by Diane Wolkstein
The secret of the golden flower : a chinese book of life by Richard Wilhelm
Essays on a science of mythology : the myth of the divine child and the mysteries of Eleusis by C. G. Jung
Fewer