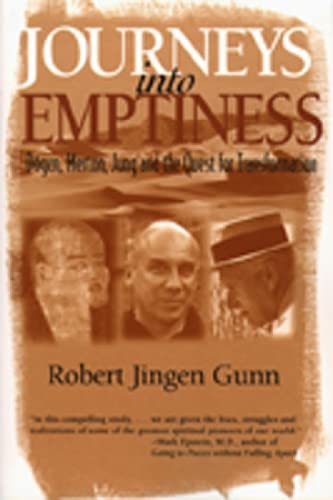 Journeys into emptiness : Dōgen, Merton, Jung and the quest for transformation

Here are the life journeys of three great seekers who, though separated by time and culture, had much in common. Dogen was the 13th century Japanese founder of a School of Zen Buddhism and a teacher of zazen, wordless meditation. Jung was a 19th century Swiss psychologist who broke with psychoanalysis and saw the mind as having both male and female elements. Merton was a 20th century American Trappist who through traditional Christianity eventually embraced a wider spirituality. Each of the three engaged in a search for personal transcendence, a search that was triggered by a private experience of emptiness. Recommend this title to --
-- readers of biographies
-- readers of Merton
-- Jungian psychologists
-- practitioners of Zen
-- spiritual seekers
-- Buddhists
-- pastoral counselors
-- therapists

Spiritual pilgrims : Carl Jung and Teresa of Avila by John Welch
Alchemy : an introduction to the symbolism and the psychology by Marie-Luise Von Franz
Romancing the shadow : illuminating the dark side of the soul by Connie Zweig