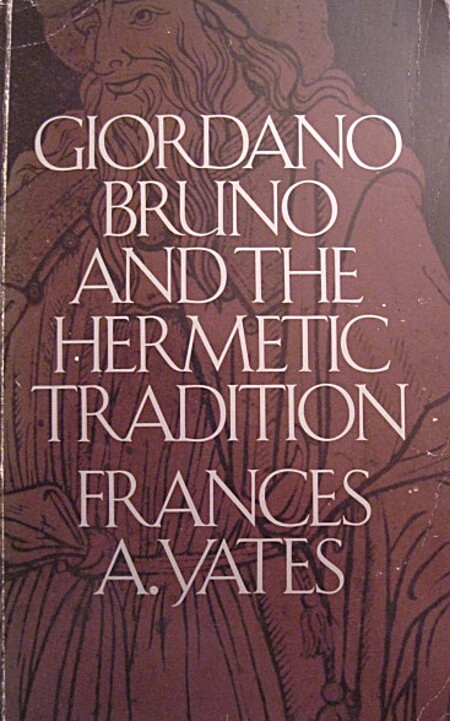 Giordano Bruno and the Hermetic tradition

Placing Bruno—both advanced philosopher and magician burned at the stake—in the Hermetic tradition, Yates's acclaimed study gives an overview not only of Renaissance humanism but of its interplay—and conflict—with magic and occult practices.

"Among those who have explored the intellectual world of the sixteenth century no one in England can rival Miss Yates. Wherever she looks, she illuminates. Now she has looked on Bruno. This brilliant book takes time to digest, but it is an intellectual adventure to read it. Historians of ideas, of religion, and of science will study it. Some of them, after reading it, will have to think again. . . . For Miss Yates has put Bruno, for the first time, in his tradition, and has shown what that tradition was."—Hugh Trevor-Roper, New Statesman

"A decisive contribution to the understanding of Giordano Bruno, this book will probably remove a great number of misrepresentations that still plague the tormented figure of the Nolan prophet."—Giorgio de Santillana, American Historical Review

"Yates's book is an important addition to our knowledge of Giordano Bruno. But it is even more important, I think, as a step toward understanding the unity of the sixteenth century."—J. Bronowski, New York Review of Books

LibraryThing member Poquette
Giordano Bruno and the Hermetic Tradition purports to trace the history of Hermeticism from the time a Greek manuscript of the so-called Corpus Hermeticum was brought to Florence in 1453, at the time of the fall of Constantinople to the Turks. At the behest of Cosimo de Medici it was soon translated into Latin by Marsilio Ficino, one of few Italians who had studied Greek. The Corpus is a collection of mystical tracts in the form of dialogues, hymns, dream visions, prayers, and scripture-like accounts which are now understood to have been written by various persons during the early Middle Ages, but at the time of their introduction into Renaissance Italy, they were believed to be by Hermes Trismegistus who, again according to belief at the time had lived contemporaneously with Moses, but was later determined to be a mythical character who possibly had never lived at all.

This little collection of tracts, which had much in common with the Neoplatonic philosophy that was already widely accepted, had an electrifying effect on many of the learned men who fell under its spell, and it set off an amazing train of events which may have indirectly influenced the development of science and mathematics leading up to and during the Enlightenment.

What was the excitement all about? As a supposed contemporary of Moses, Hermes' writings were believed to foretell Christ much as the Hebrew Bible did. This was important to the intellectuals who saw the Church as more a purveyor of corruption and authoritarianism rather than as a fount of morality and spirituality. Since the Church was not a source of spiritual sustenance, those with a spiritual hunger were willing to seek nourishment wherever it lay, and they attempted to reconcile Hermeticism with Christianity in an effort to stay within the good graces of the Church.

The Corpus Hermeticum was a deeply spiritual collection of texts. However, it was not the first Hermetic document known to Renaissance scholars. An earlier medieval Latin manuscript called the Picatrix had been circulating down through the ages. It was largely a text of magical or theurgical procedures. While the Renaissance sages like Ficino were steeped in astrology, they steered clear of outright magic because of the stance of the Church which was burning people at the stake for heresy. Magic definitely fell under the heading of heresy.

Frances Yates traces the history of magical Hermeticism from Ficino and Pico della Mirandola to Cornelius Agrippa, Giordano Bruno, Thomas Campanella and Robert Fludd. Each of these individuals put his own individual mark on the theory and practice of Renaissance magic.

The first half of the book provides background on Hermeticism. The second focuses on Bruno and the aftermath of the discovery by philologist Lorenzo Valla that the Corpus Hermeticum did not trace back to the era of Moses after all but was written and compiled somewhere around the second or third century A.D.

After crawling through four hundred pages of history and historiography, the real payoff comes in the final chapter where Yates credits not the practitioners but their critics with hastening the development of science and mathematics. It is Yates' position that the level of analysis achieved prepared the way for more and more rigorous thought processes. For example, Bruno was a believer in the Copernican theory of heliocentricity, but his belief came through a version of Pythagorean numerology. Copernicus and his follower Johann Kepler used actual astronomical observations and pure mathematics to reach their own conclusions. The trend toward pure mathematics led to Descartes and all that followed. The condemnation of Bruno to burn at the stake has been attributed to his belief in Copernican heliocentricity. But there was much more to it than that.

Only the most dedicated reader will want to slog through this entire book. I almost quit halfway through. The more it concentrated on magic, the more my interest waned. But in the end, I would have to give this book the highest marks both for what it explains, for the clarity of the narrative — except for all the irritating untranslated Latin quotations — and for the conclusions it reached, which shed important light on the history of science.… (more)
1 more
LibraryThing member AlanWPowers
Good but dated (1964), where I started after our Moon landing and after 15pp of B's Latin poem on the Innumerable Worlds (400pp). Also, GB as magus* is only 1/4 the story. You'd never guess from this that 1) GB wrote a hilarious comedy, Candelaio*; and 2) GB laughed aloud after quoting Aristotle, which he mastered, and taught at the U of Toulouse (1579). 3) He also mastered Copernicus (spherical geometry) and wrote five books on math (one anticipating calculus, De minimo). He interviewed for the open Chair of Math (U Padua, 1592) won by a guy who had published only one piece --on art. The winner would not publish on math (and astronomy) for 16 more years when he became a household name, though Kepler said he used Bruno's habitable idea unacknowledged: Galileo Galilei.

* GB did write 4 books (of his 26) on magic, but he also satirizes Magi in his comedy, with 4 of 'em of different stripes: Scaramuré (whom men trust to improve love, a Caribbean obeah doctor in my version), Bartolomeo the working chemist-alchemist, Cencio the conman-alchemist, and Consalvo the spice-pharmaceutical agent.… (more)
Fewer

The art of memory by Frances A. Yates
The occult philosophy in the Elizabethan age by Frances Amelia Yates
The book of life by Marsilio Ficino
Psychology and alchemy by C. G. Jung